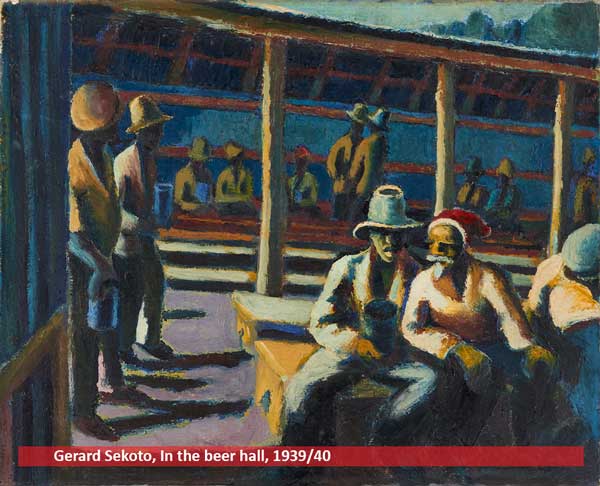 The Gerard Sekoto painting that was destined for auction in Paris this Wednesday is no longer available to Parisian bidders as it is a national heritage, and therefore cannot be taken outside the country, CityLife Arts can reveal.

Titled  In the beer hall 1939/40 and painted in the beginning of his career while still in South Africa before leaving for Paris, this valuable work was scheduled to be auctioned in Paris on Wednesday alongside other valuable works from South Africa by top modernist artists, including Irma Stern, and JH Pierneef among others. The auction is organized by top Johannesburg and Cape Town based auction house Aspire Auctions in collaboration with Piasa a Paris based auction house, which specializes in pan African contemporary art.

However the South African Heritage and Resource Agency (SAHRA) intervened in the case of In the beer hall painting, as this art work is regarded as a national heritage and therefore is protected by law and cannot be sold outside South Africa under the National Heritage Resources Act (NHRA).

Aspire Auctions conformed that the Sekoto artwork was no longer available to bidders in Paris, but will be made available to bidders in South Africa at its next auction in August. This new development around this Sekoto work will definitely result in fierce bidding for this valuable painting once it eventually comes under the hammer. And therefore the loss of the Paris bidders is the gain of the South African collectors come August when the next Aspire Auctions auction takes place in Johannesburg.

When CityLife Arts first ran the article about this work going to be auctioned in Paris, in May, some readers took umbrage to the work leaving South African shores.

“After careful consideration, and in accordance with the National Heritage Resources Act (NHRA), the South African Heritage Resources Agency (SAHRA) has advised us that In the beer hall, an early painting by Gerard Sekoto may not be exported from South Africa.
The work was initially intended to go under the hammer in Paris at our auction of Modern & Contemporary African Art, in collaboration with Piasa, on 24 June, but will now remain in the country and be sold on our next local auction in August 2020.,” said Aspire in a statement.

The exceptionally rare, early work by Sekoto who is widely considered to be the father of black modernism in South Africa – has been described by SAHRA as: “.of outstanding significance by reason of its close association with South African history [and] culture, its aesthetic qualities, [and] its value in the study of the arts…”
Sekoto left South Africa for Paris in 1947, where he lived and worked for 46-years in self-exile. Although the artist sadly never returned to South Africa, his works executed before he left the country are today considered to be his most significant. As Sekoto’s works were first exhibited at Gainsborough Art Gallery in Johannesburg in a 1939 group exhibition, In the beer hall, estimated to have been painted in 1939/40, may well be one of the earliest works in oil paint on canvas to come to market.
“SAHRA is also of the opinion that the painting: “is of such a degree of national importance that its loss to South Africa would significantly diminish [the] national heritage.”
Sekoto’s painting of the patrons inside a beer hall is one of the earliest images of black people painted sympathetically by a black artist. His portrayals of people in Sophiatown, District Six and Eastwood from the 1930s and 40s provide a unique and rare insight into the experiences of his subjects and are as such deemed to be of great importance to the National Estate.
In the beer hall is currently at Aspire Auction’s offices in Johannesburg and can be viewed by appointment.

“The work will feature in our August 2020 auction. It is advised that any collector interested in owning In the beer hall will need to house the work in South Africa in accordance with SAHRA’s decision,” said Ruarc Peffers the managing director of Aspire Auctions.