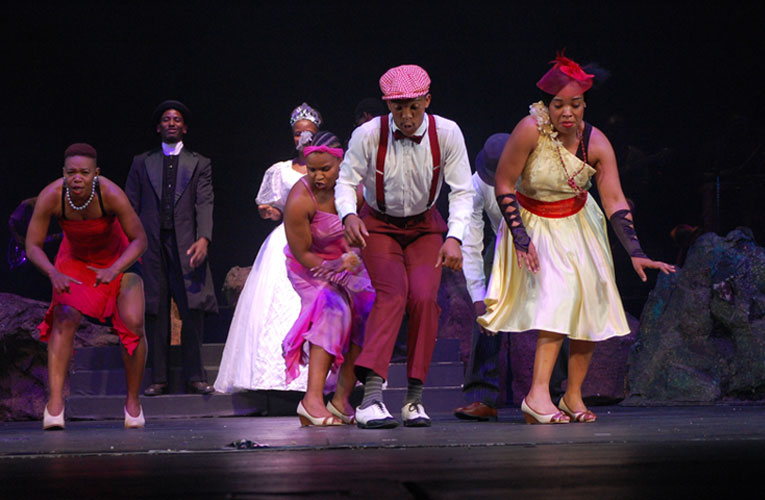 This is a show that has again and again been mesmerizing audiences around South Africa and beyond. This is not surprising because the musical play delves deeply into African traditional culture in a manner that is deeply authentic and unapologetic.

For example, many people who are not from the African culture have a tendency to think that simply because two Africans who fall in love and decide to marry, across ethnic lines, shoulder find it easier than say a white person and a black person who decide to do the same. The truth is African culture is complex, and its nuances are sometimes experienced in a culturally specific way, to fully grasp its full complexity.

It is these issues that are dealt with in Umshado: Marriage of Heritage, which this time around is gracing the stages of the National Arts Festival, which is enjoying an extended run. Currently. The production, which is written and directed by Bogosi Bolokwe, a veteran of the stage is gracing the vFringe of the festival, which this year can be enjoyed in the comfort of one’s home with family.

In fact this format suits well the current situation where people are confined at home due to the rampaging coronavirus.

Through a very strong narrative frame that is superbly delivered through cleverly polished dialogue in multiple languages, energetic dance routines and traditional Tswana songs, the production will get you to laugh most of the times due to the humour in it and the way the cast navigates the issues of cultural clashes within African societies, especially cultural practices within the body of African culture.

Simply because we are born on the same continent, and even country, does not mean that our traditional cultural practices are the same. They in fact are not. Sometimes where such lines of differences are crossed, such as when two people from two different cultures decide to spend their whole lives together, these differences emerge and sometimes they are difficult to handle. as such instances pits  traditionalists from both families at logger heads due to cultural differences that cannot be avoided in a cross cultural marriage situation.

But like they say, nothing can beat love, as is the case in Umshado: Marriage of Heritage, which is suitable to be watched by the whole family, at a reasonable price of R50 a ticket.

By watching this production, not only will you be left entertained  and feeling less burdened for having to constantly deal with the dark cloud of the pandemic hanging over the horizon,, but you will also be left with a deeper understanding of the complexity of African cultures, and what happens when they clash, such as in Umshado: Marriage of Heritage.

In this story a Tswana young man from the rural areas comes into the city, and for the first time he makes contact with people of other races, cultures, traditions and languages. He is amazed by the ability of these peoples from various cultures to work productively together. He learns about their music and enjoys a repertoire of performance styles that carry strong and rich traditional melodies.

As fate would have it, he eventually falls in love with a Zulu girl. After experiencing a Western wedding in a church, he decides that he should remain true to his Tswana tradition. He arranges with his elders “abakhongi” to negotiate and offer lobola (a gift of appreciation) on his behalf. This is when it becomes interesting.

The bride’s father becomes adamant that he will not allow his Zulu daughter to wed a Tswana man.

However, eventually “emissaries” settle the dispute and manage to unite the two families. The groom invites his newfound friends from the city to the wedding, a celebration displaying the various cultures and capturing the magic of African people and its raw beauty. It is at this stage when the audience experiences an exciting encounter in the play as a mosaic of dance routines, soulful voices and warm melodies are at display.

The creative team behind this show comprises Bolokwe (writer, director and producer), Eddy Mathiba) the late Lennox Sibisi as choreographer (He unfortunately passed on, on December 28, 2019)

To book a ticket for R50 to watch Umshado go to www.nationalartsfestival.co.za