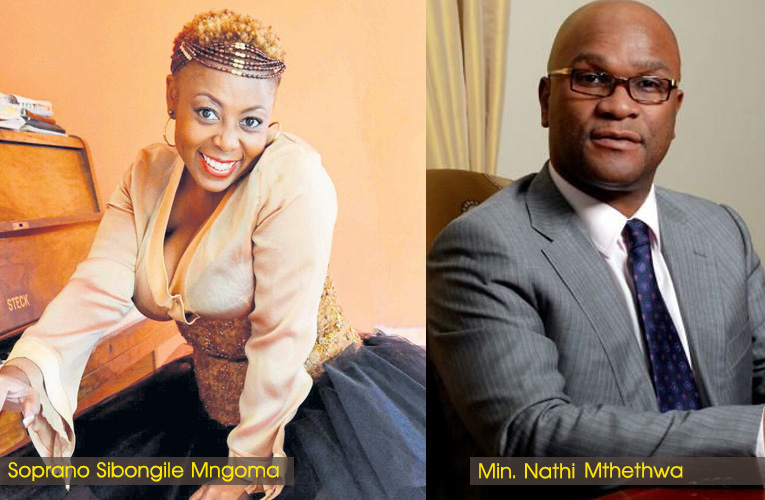 Opera singer and arts activist Sibongile Mngoma has taken a strong stand in the ongoing fight between the Department of Sports, Arts and Culture, and artists over the Covid -19 funds.

An enraged Mngoma is calling for DSAC, a government department that is meant to look after the interests of the artists to do the right thing and fund all artists in an inclusive manner and not use an opaque criteria that excludes the majority of artists in the country. In a video release yesterday on the Im4Artists’ facebook page,  the enraged artist describes the Minister and his officials as being good at shifting blame and responsibility.

In this hard hitting video that she recorded live on the Facebook page of the Im4theArts movement yesterday, the artist expressed dismay and disappointment in the way the Department of Sports, Arts and Culture has treated artists with regards to the disbursement of the COVid-19 funds.

DSAC like other departments set aside funds for artists in March to help them navigate the difficulties they are experiencing as a result of not being able to work due to the lockdown. Over 400 artists received amounts between R4000 and R20 000, leaving out a huge chunk of the arts community who are now languishing in poverty and hunger as they cannot practice their art under the current lockdown regulations.

Explaining the motivation that informed the foundation of this movement which is currently formalising and has close to 20 000 artists who are dismayed by the treatment from government, the enraged soprano did not take prisoners in her criticism of DSAC in general and the Minister Mthethwa in particular in this video recording, telling the minister and his officials to “fu….k..off .”

Im4the Arts ha since its formation a few months ago emerged as a mass based artistes oeganisation  in the country with a growing membership and popularity within the arts sector. The interim leadership of the organization has been busy during the lockdown, organizing a successful Winter School, and its committees have completed drafting its constitution, and if anything, this latest outburst of anger expressed by Mngoma towards the department seems to be a result of pressure from the organisation’s membership who are currently facing difficulties under the current environment of not being able to earn a living.

I also hear that you say I have sworn at you, which is something I have not done. Now I am swearing at you. (she says expletives)….,and you can call the police,” she says on the video which has since gone viral.

At the centre of the artists’ anger is the manner in which Covid-19 funds were disbursed, which saw some artists being disqualified because they could not produce the required documentation, while some of those that have been approved complain that they have not yet received their money.

Also at issue is the fact that  there is variation with regards to the funds that were approved for those whose applications were successful, some applicants getting as little as R4000 while others getting up to R20 000.

“What informed that decision of saying some are getting R4000, while others up to R20 000. Relief fund is relief fund and therefore the only qualification is that you are alive and you are an artist. This is different from applying for a project funding”’ says Mngoma.

She is also critical of the panel that the minister appointed calling that abdication of responsibility on the part of the minister and his officials.

“Who are these people who sat down and came up with the criteria claiming to be stakeholders and representing artists. They are nonsense and rubbish and do not represent artists,” Mngoma says.

The founder of the now increasingly powerful movement, which is currently currently registering members formally, Im4the Arts, called for artists to rise and campaign for access to the money for artists that she says the department has, and is contemplating transferring that money to treasury.

“I am not even going to try and open something. This is relief fund and not for projects, and therefore, the money must locate me. If the department does not know how to come up with creative ways to disburse the funds they must ask us, as artists we will find creative ways to do so. Artists in Free State KZN….know who the artists are.

“We know each other and we do not need a panel,” she said.

CityLife Arts could not reach the spokesperson for Minister Mthethwa yesterday, and as soon as we do so, this story will be updated. In the meantime, the video can be accessed at: https://www.facebook.com/groups/Im4theArts/?post