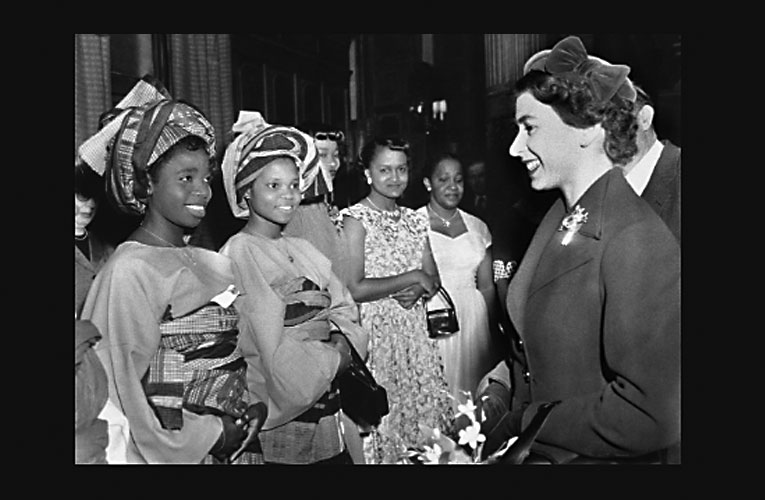 Leaders of the Aba women’s protest against a tyranical warrant chief in Nigeria in 1929. National Museum of Unity, Nigeria.

Selected petitions and written correspondence between Igbo women and British officials between 1892 and 1960 shed fresh light on how women navigated male-dominated colonial institutions and structures of the time.

African women acted in varied and complex ways to the situations they found themselves in. This ranged from subtle to overt opposition, and sometimes violent resistance.

One response was through petition writing as women took to the pen to articulate their concerns. In my research, I examined several petitions written by Igbo women to British officials during the colonial period. I found that petition writing was part of the complex power politics between the women and the colonial state.

On June 5, 1885, Great Britain proclaimed Nigeria as a colony. It declared a protectorate over territories on the coast between the British Protectorate of Lagos and both banks of the Rivers Niger and Benue (The London Gazette, June 5, 1885). Although treaties were signed with rulers by 1885, actual British control of northern and southern Nigeria was not attained until 1900. Colonial rule lasted until 1960 and was resisted in various forms. In Igboland, this included warfare, protests, tax evasion and petition writing.

The petitions enable us to understand the circumstances under which women turned to the government for assistance and under which the authorities granted or rejected their requests. Women opened up debates and dialogues using petitions. This offers insights into their relationships with indigenous men and with British officers.

My research shows that petition writing granted women agency and opportunities for far greater female assertiveness and civic engagement. In this sense, petitions served a political purpose and proved a powerful tool for the disenfranchised — a group that included more than just women.

The political context of the time was that women were not incorporated in colonial administration. Petition writing was therefore a means by which women could influence, resist, negotiate and counteract policies within the colonial framework.

It also challenged the outmoded narrative of the passivity of women in the colonial power structure. They were actively involved as individuals or groups in shaping public policies in the colonial era.

In Igboland, women regularly approached British officials with personal requests and complaints. The focus of their petitions was on socio-political and economic issues such as taxation, politics, policies, price control, cost of living, family issues, representation, marriages and so on.

These excerpts are drawn from a pool of petitions which I have dubbed “voices on ink”.

On September 12, 1928, Igbo women led by Madam Chinwe petitioned the Lieutenant Governor of the Southern Provinces over the frustrations that the colonial economy placed on them. (The British National Archives (TNA), FCO 141/13669/2. Petitions and Complaints: Madam Chinwe)

In view of the fact that Aba women at the present time suffer significant hardships regarding the high cost of staples, could you consider fixing the prices of foodstuff at certain fixed rates? (Aba Progressive Union – Petitions, 9/12/1928, National Archives, Enugu (NAE), Abadist 13/12/15. File No. 99/28)

On November 16, 1937, Mary Nna of Ohambele petitioned the Senior Resident, Owerri Province, concerning what she perceived to be an unfair judgement against her in the group native court of Ikwueke. She wrote:

I respectfully submit that the annulment of the Native Court judgment by the Reviewing Officer is bad in law … The evidence of the defendant is a tissue of lies and the defendant set up the defence as an afterthought in order to frustrate the course of justice and bring to ridicule and contempt British justice and fair play. (Petition from Mary Nna of Ohambele, Aba Division, 12/11/1937, NAE, Abadist 9/1/95, File No. OW. 3041/5)

On September 7, 1940, Maria Olumo petitioned the Resident to help restore her ownership of a piece of land that she alleged the Chiefs of Umuezi had taken from her and unlawfully transferred to a European firm, the United Africa Company. (Abadist 14/1/31. File No. 31 Vol. XVII. Maria Olumo (F): Petitions and Complaints: General)

What the petitions tell us

Petition writing demonstrates the “politics from below” which regularly featured resistance by women during the colonial era. Women, along with their male counterparts, took advantage of opportunities to seek redress and inform the government of their needs and complaints.

Petitioning was an avenue to interact with colonial authorities despite the social distance that separated ordinary subjects from the colonial ruling elite. Seeking redress through petitions was a powerful tool that helped bridge the gap between men and women in a rigidly patriarchal colonial system. While women understood and respected this distance, they certainly were not entirely powerless or voiceless.

Petition writing also offered a legal means to bridge the gap. It gave female subjects, who generally had no other direct contact with the authorities, a legal mechanism to press the government to fulfil its obligations.

Additionally, they demonstrate that women were not passive and vpoiceless  subjects of the empire, as much of the colonial historiography would have one believe. On the contrary, women understood their qualifications as petitioners and their rights even as they stood before an administration that was male dominated.

Petitioning allowed women to occupy (as much as possible) colonial spaces that were constructed as quintessentially male. Since they occupied substantially diminished roles, Igbo women evolved their roles into a semblance of their precolonial expressions of political and socioeconomic power. By petitioning, they could be heard in the corridors of power that were otherwise unapproachable to them. Sometimes they managed to get the upper levels of colonial government to address a manifest wrong.

Even when the administration did not resolve their problems, analysis of these sources reveals a pattern of interaction between the coloniser and colonised, one that hasn’t been recognised before.

Indeed, a study of “female voices on ink” demonstrates the need to shift narratives and focus on neglected but unsung female heroes of the colonial period. We must recognise these women for who they were – contestants and agents of power in a male-dominated, British colonial society.

Bright Alozie is lecturer in History at West Virginia University. The article was first published on The Conversation.