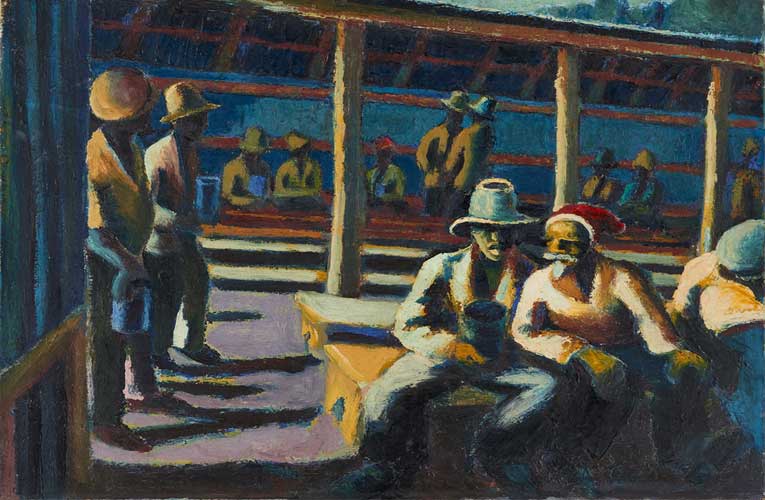 The rare Gerard Sekoto painting that could not leave the country for an auction in  Paris  in June because ‘it is national treasury’ is back on the market.

The peace that forms part of his early works, and is thought to have been either created in 1939 or 1940, whose title is In the beer hall will come under the hammer at Aspire Fine Art Auctions’ virtual live auction on September 3.

The In the beer hall piece of art work whose estimated value is between R1,500 000 and R2,000 000 forms part of the highlights of this auction come September 3. It is expected to attract fierce bidding from collectors as it forms part of the legendary late South African born artist’s early works before he left for Paris where he died.

This painting by the celebrated Sekoto was recently unveiled early this  year by Aspire and was initially intended for auction in Paris as part of the Modern & Contemporary African Art sale, Aspire organised in  collaboration with the French auction house Piasa, in June. That however did not happen as it was deemed too precious to leave South Africa.

“However, after careful consideration and in discussion with the South African Heritage Resources Agency (SAHRA), In the beer hall will now remain in the country and be sold by Aspire in September.

Painted before Sekoto left South Africa for France, In the beer hall shows a scene of patrons inside an informal beer hall; men gathering at the end of the day, the slowly setting sun casting long shadows where they stand or sit together as they enjoy a flask of beer. Sekoto moved to Sophiatown in 1938, and it is likely he depicted a beer hall in this bustling, cultural hub of Johannesburg.

It is this place and this time that Sekoto brings to life in this exquisite painting, evoking the lives lived there in the late 1930s. Alive to the scene before him, Sekoto depicts his fellow human beings with sensitivity, warmth and empathy. Ultimately, this painting is one of the earliest images of black people, painted sympathetically by a black artist,” Aspire said in a statement at the time.

Born in 1913, just as the Land Act was implemented – an act which segregated South African citizens on the basis of their race – Gerard Sekoto was one of the country’s many black intelligentsia who were driven into self-imposed exile in the hopes of pursuing a better life and successful career abroad. Sekoto left South Africa for Paris in 1947, where he lived and worked as an artist, and sadly never returned until his death in 1993.

While Sekoto gained recognition in Europe, and continued to exhibit in Johannesburg and Cape Town, the artist’s works produced in South Africa from 1938 until he left the country are today considered to be his ‘golden era’ and regarded as the most important. His first exhibition took place at the Gainsborough Gallery in 1939, and in 1940 the Johannesburg Art Gallery purchased one of his paintings for the gallery’s permanent collection – a momentous occasion as this was the first work by a black artist to enter the collection of any South African museum. In the beer hall carries great significance and, having been included in one of the artist’s first exhibitions, may well be one of his earliest oil on canvas works to come to market.

Established in 2000, SAHRA is mandated to protect South Africa’s cultural heritage. In accordance with the National Heritage Resources Act (NHRA), SAHRA is responsible for the management and promotion of the country’s diverse heritage resources.

“In line with this, and in recognition of In the beer hall as: “…of outstanding significance by reason of its close association with South African history [and] culture, its aesthetic qualities, [and] its value in the study of the arts…”, SAHRA has ruled that the painting may not be exported from South Africa.

SAHRA’s view is that the painting: “…is of such a degree of national importance that its loss to South Africa would significantly diminish [the] national heritage”. Sekoto’s portrayals of people in Sophiatown, District Six and Eastwood from the 1930s and 40s provide a unique and rare insight into the experiences of his subjects and are as such deemed to be of great importance to the National Estate,” Aspire added in a statement.

This art work come September may end up in a lucky collector’s hands as In the beer hall is up for auction again.