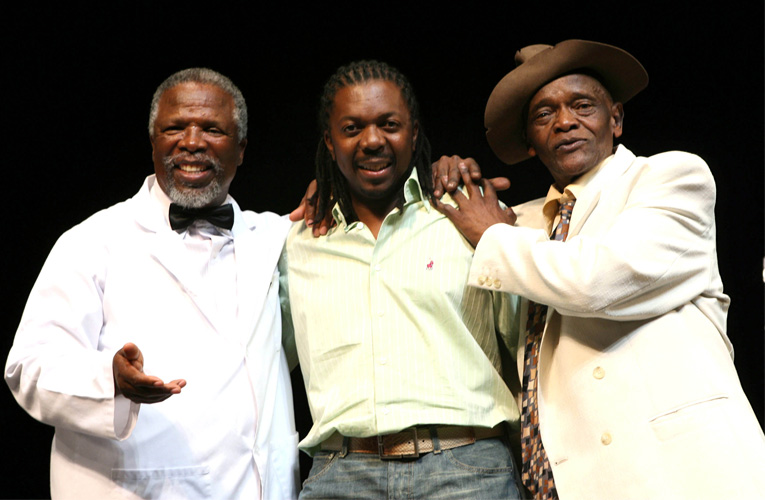 With no doubt Protest Theatre played an important role in the fight for freedom in this country during apartheid, and some will argue that even in a democratic South Africa it still has a role to play as inequalities have not been banished and in fact in some cases even more defined. This is because the transformation of society, especially the economy has not happened to the scale that was envisaged, and the poor continue to struggle, service delivery still a challenge, even though the government has in the past 26 years closed some gaps that were so glaring during apartheid such as in education, providing clean water and electricity to households, and the number of the un employed is currently uncomfortably high. The arrival of the coronavirus pandemic is bound to worsen the economic situation and threatens to leave many unemployed people in its wake and path of social and economic destruction with a potential to cause social strife and instability.

One and  the productions that became a notable theatrical voice during the struggle is Sizwe Banzi is Dead written by Athol Fugard, John Kani  and the late Winston Ntshona, and the production then resonated with especially black people who were excluded from job opportunities  in especially urban areas. Of course South Africa of today is a democracy and its constitution guarantees human dignity and disallows discrimination of any grounds, but that does not mean that the challenges of ordinary people in communities have vanished altogether  with the advent of democracy.

Many productions of this play have been put together over the years, including the 2006 version directed by Aubrey Sekhabi, who is currently the artistic director of the State Theatre in Pretoria. Let us revisit this 2006 production which starred none other than the doyennes of South African theatre John Kani and Winston Ntshona in celebration of Heritage Month.

The 2006 production of Sizwe Banzi is Dead performed to critical acclaim at the Market Theatre after its successful performance at the National Arts Festival in Makhanda (formerly Grahamstown) in the same year.

Sizwe Banzi is Dead, started its national tour to great acclaim at 2006’s Grahamstown National Arts Festival, and came to the Market Theatre’s main stage for a limited season only.

With characteristic humour, Sizwe Banzi is Dead tells the story of Sizwe Banzi (Winston Ntshona), a rural black worker who leaves his home in King William’s Town to seek employment in Port Elizabeth. He is ordered to leave the district because his pass is not in order. With his friend Buntu (John Kani), he comes across a dead man with a valid pass. Desperate, they steal his pass and forge his photograph. Sizwe assumes the dead man’s identity so that he can remain in the city to provide for his wife and four children.

Although the work is set in apartheid South Africa, its exploration of the theme of identity remains just as relevant 26 years into our democracy. While calling for political change, it also makes its audience aware that new and better political systems ultimately depend on a change of heart for all involved.

Sizwe Banzi Is Dead was included in a publication of the Best Ten Plays on Broadway as well as one on the Masterpieces of the Twentieth Century. It was also rated 59th on the Royal National Theatre’s list of most significant plays of the twentieth century, equal with TS Eliot’s Murder In the Cathedral.

The original 1975 Tony Award-winning duo, Kani and Ntshona, performed this classic tale in 2006 for the first time since it was produced decades ago. Sekhabi directed this internationally celebrated production which offered the audience a unique and historic theatre experience:

Full Credits for the 2006 Sizwe Banzi is Dead

CITYLIFE/ ARTS Disclaimer: This article only refers to the 2006 production of Sizwe  Banzi is Dead and no current show is on at the moment, and we are only publishing this article in the context of  Heritage Month and the Protest Theatre legacy championed mainly by the Market Theatre during the dark years of the struggle for freedom.