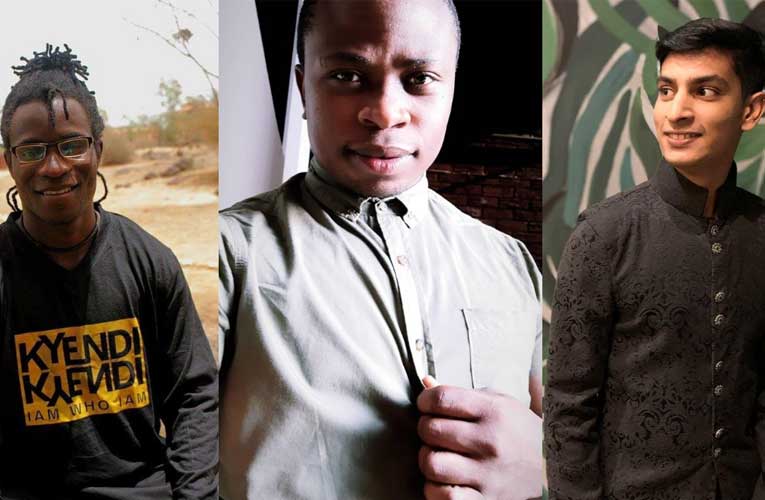 After a riveting showcase of 8 digital dance works by dance –makers from South Africa, the DRC,  Uganda and Madagascar in the 22nd JOMBA! Contemporary Dance Experience Digital Fringe – three winners were announced.

These three films are available to watch online on the JOMBA website https://jomba.ukzn.ac.za/pick-of-the-fringe/

JOMBA! which is presented by the Centre for Creative Art, UKZN continues until 6 September – to access the live performances online https://jomba.ukzn.ac.za/whats-on-today/

More about the artists:

Robert Ssempijja is a diverse emerging Ugandan Contemporary Dance Artist and Dance Researcher with a career in formal and informal dance settings as well as a person who works in the era of post colonialism and decolonization, and travels between the worlds is in order to find wayS to build a sustainable scene for contemporary dance in Uganda. He has practiced his art in three different continents with different companies, projects and choreographers like Christoh Winkler (Germany), Nora Chipaumire (New York/Zimbabwe), Qudus Onikeku (Nigeria), Patrick Acogny (France/Senegal) and many more so that he can develop new aesthetics and forms of dance despite his young age of 25 years.

Robert is also curious about how the body creates and transfer information as well as secrets into movement which build up the body’s own vocabulary. He assumes that our bodies are comprised of archives of information which are activated when it comes to movement. In his art, he uses a combination of Ugandan traditional dance, breakdance and techniques of contemporary dance to get those interesting creations of art.

Sabelo Cele is a 26-year-old black queer male choreographer based in Durban, Kwazulu-Natal. He was born in the township of Soweto and grew up in the rural arears of Ladysmith, Ezakheni. He graduated with Bachelor of Social Sciences Degree from the University of Kwazulu-natal in 2018. His Majors are Drama and Performance Studies with interests in schools like Sociology and Political Sciences. Sabelo creates provocative works and Advocates for the LGBTI+ Community.

He is currently enrolled as a Master of Arts candidate at the University of Kwazulu-Natal, where he obtained his Honors Degree in 2019: His Honors creative output piece: Isibazi was awarded Best Creative Output by the School of Arts Excellence Awards and was selected to be staged in the prestigious Jomba Contemporary Dance Experience in 2018.

After serving and a senior Lecturer and Researcher at AFDA for a year, he has expanded his wings into the Film and TV disciplines as he has produced a documentary of his 2nd theatre piece titled imvunge Yezinkonkoni staged at the Hexagon Theatre Dance Experia in 2019. He has also co-choreographed and danced in a music video of the South African Idols Winner: Noma Khumalo ft Sketchy Bongo – Moving On.

At the tender age of 5, Pavishen commenced his formal dance training in both modern and tap at Minette de Klerk Dance Academy, later adding Spanish dancing and finally Ballet. He joined Nateshwar Dance Company in their array of productions of Chalo Cinema under the artistic and principal direction of Smeetha Maharaj. He has in addition, also been a part of SADTA’s succession of ‘Shall We Dance’ since 2008 in the role of a dancer and a tap and Bollywood choreographer for the past 7 years, all under the direction of Neville Letard and Caryl Cusens.

In 2013, Pavishen went on to join the Playhouse Dance Residency – performing in pieces

At 27 – Pavishen is the Artistic director and lead choreographer of Rudra Dance Theatre, a tap, modern and ballet teacher at Minette de Klerk Dance Academy, an up and coming multi-disciplined choreographer and also performs in the capacity of a freelance dancer – having worked with Nateshwar Dance Company, KZN Dance Productions, Cape Dance Company, Tribhangi Dance Company.