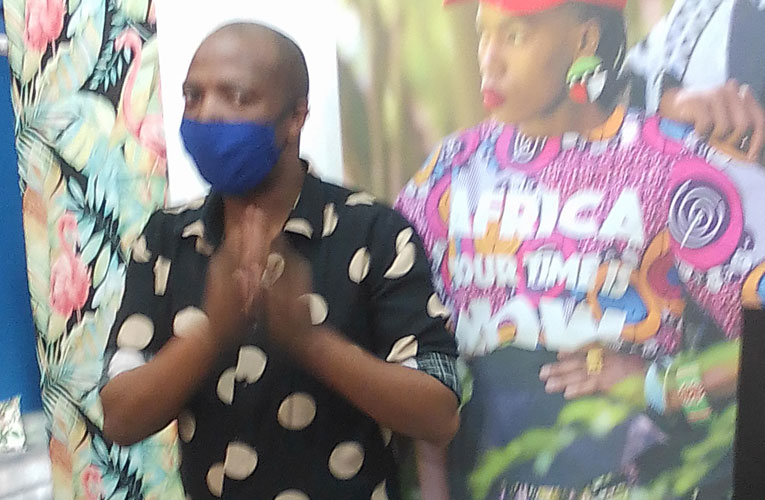 Famous premium clothing designer Thula Sindi can certainly afford to work from any address, anywhere in the country as a top designer who has been creating outfits for some of the country’s leading personalities, including celebrities and business people. But he has chosen inner city Johannesburg to base his design studio as well as to open a shop in order to reach many a customer hungry to wear his designs, and those of fellow Africans. His shop acts as a sales outlet for other designers, South Africans and those from the rest of the continent.

“The mistake that people make is think that inner city Johannesburg does not have people with good taste for good clothes. Believe me it is not about money as people who live and work in the inner city, particularly young professionals have money to buy beautiful things at any given price. When beautiful things are accessible, they will buy them and it is not about the price, but about acquiring something they desire, even at a premium price,” Sindi said.

Africa Rise, his boutique has taken a corner building on Loveday Street (Corner Anderson) in Johannesburg, from which he creates those sought after designs as well as creating a space where his customers will not only be able to shop for their ideal outfit from him, but also get to select an outfit from the more than 24 brands that are housed at Africa Rise in the Magnet building. These brands are from top names in the industry as well as from new creative fashion voices designing for both the sleek street look as well as for those with premium tastes in fashion, and have the bucks to afford these top class outfits.

The Africa Rise shop in inner city Johannesburg, is in addition to another store in Sandton City.

“If everything goes according to plan, we will soon be opening another store in Menlyn, Pretoria. The problem though is that as creatives we work in a multi-billion Dollar industry worth about R2 billion annually, but we do not get the necessary support from government as they do not understand the industry. The fashion industry is actually applied art, but to explain this to government is difficult. All that we are doing now is to open these stores on our own, without support from government.

Can you imagine what would happen to creatives If we had some financial support from government to cover rental costs in some of the prime shopping centres where some of our customers are? The reality is that some of these upmarket centres are just beyond our reach when it comes to rental costs, and that limits our competitive reach as local designers competing with international brands,” he  pointed out some of the hurdles designers like him meet on their way to rising to the top of the fashion trade.

Although the Africa Rise shop in inner city Johannesburg, a stone’s throw from the busy Gandhi Square, only opened a few months ago, in the middle of the lockdown, the designer is not new in the city as he has been working for four years from another building in the inner city. He is in fact one of several creatives working within the city, including fellow famous designer David Tlale who has been working in the inner city for years. In fact CITYLIFE/ARTS is reliably informed that Tlale will soon take a whole floor in the exclusive The Rand Club building on Commissioner Street.

CITYLIFE/ ARTS with other media houses visited Sindi’s Africa Rise shop recently with Joburg Tourism, which was activating tourism around Johannesburg, following the disruptions of the outbreak of Covid 19 and the subsequent lockdown, which was eventually relaxed to level !, allowing tourism activities to take place, among other economic activities.

Sindi said that he is able to work with other designers simply because he has realized that collaborations are the way to go, and so far he has not experienced any difficulties with his colleagues. Sometimes creatives can be difficult to work as a collaborative collective, preferring to work on their own because of the nature of their work. Some even fear that their designs might even be copied by others in the industry.

Sindi aggress that sometimes working with fellow creatives can be difficult, but at Rise Africa they have formulated ways in which such complications are minimised or even completely eliminated as a possibility.

“To start with, before we take on a designer they have to undertake a course in ethics. And also we want the designers to regularly visit the shop to see for themselves how their products are selling and get customer feedback directly. This is important for designers to visit the shop as regularly as they can, because they will see how sales are made from their designs, and they can learn something from the customers themselves. Also the other thing that has made it easy for us to work with fellow designers is the fact that designers get paid without problems once their products have sold.” He also added that personally he does not have issues with working with fellow creatives.

“Sometimes I get to see how a young creative is working, and get inspired myself. Collaborations is the future in our industry,” he declared.

“I always tell local designers that we should not do everything, but should rather concentrate on the IP (Intellectual Property), and not try to be dirty by going into mining. We should choose where we want to enter the fashion trade. I would advise that local designers should not be the ones who manufacture, but leave that to others and concentrate in one area, preferably IP,” he advises strongly.

He added that concentrating on design should work well for African designers as Africa is in a better position when it comes to designing for the African market as they understand the culture and the context in which such culture exist and how that influences fashion tastes of local consumers.