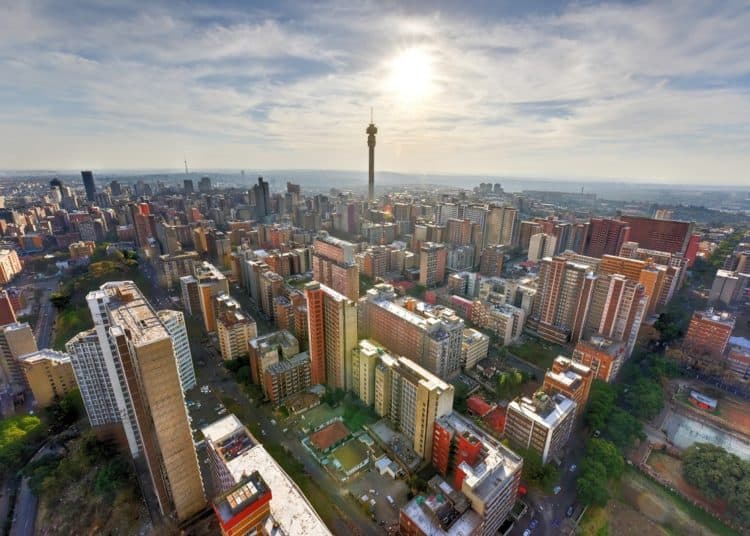 The Johannesburg CBD may be a no go area for those who are hesitant right. And the reasons given mainly is that the city is infested with crime, with criminals of all sorts lurking in its alleyways, even hiding in its several, often open manholes, ready to pounce on their target at the right time. Well crime is there, but actually that is not the greatest danger for those walking in its streets.

“The biggest threat to those walking Joburg’s streets is actually not crime. Crime is not as big as it is made out to be. The biggest threat are the manholes, and one has to at all times, watch out for them because if you do not, you will be swallowed and taken on a rough journey that could take you as far as Mozambique. The journey will be rough but the destination will be lovely,” jokes well known inner city activist and story teller Charlie Moyo, who with his colleague at Joburg Places, Gerald Garner are fighting to save the city from its own people.

The two were taking the media on a tour of some of the coolest places and establishments around the city that would give Sandton a good run for its money for giving a discerning visitor an unforgettable experience. The tour with these two story tellers and inner city tour guides was organised recently by Joburg Tourism in an activation marking the almost normal tourism activity after tourism activities were stopped by the outbreak of the coronavirus and the subsequent placing of the whole country on lockdown in March. This lockdown and its restrictions almost decimated tourism businesses such as tour operators that relied for business on international tourists.

The coronavirus and the lockdown could not have come at a more in appropriate time as the city at the time was battling an apparent slide down the drain, and some of it, If not most, could have been prevented as it was locally induced, with politicians mostly to blame for speaking about the city in negative terms, according to Garner.

Garner should know as he has been operating his company, Joburg Places successfully for years now. He has even written two books about the city, with the latest book having been published only a few months ago, during lockdown.

”When 2010 happened  there was development taking place around the city, such as the construction of the Mandela Bridge, (a structure that was built to connect Newtown with the North Via Braamfontein, is now a shell of its former glory due to vandalism and neglect by authorities,), Newtown was renovated and Maboneng came up at the same time. There was a lot of tourist activity in the city. The trajectory changed somewhere around 2017, especially when a new administration that spoke negatively about its own city came into power. By 2018, the situation was bad enough. But what really affected the city was an event that took place in 2019, that is when there was xenophobia around the city. Nobody wanted to come to the city, and several tours were cancelled and businesses were  affected badly,” explained Garner.

Garner and Moyo, who also run The Thunder Walker restaurant at Ghandi Square, housed in a historic building complete with its alluring Victorian architecture, believes that Johannesburg  is not dying, but in fact is on a successful come back trail, just like it has done since it was built in the 19th century when gold was discovered on the reef.

“We believe that the future of Johannesburg is bright, and actually the city is reinventing itself once again, just like it has always done in every 20 year period. But its future now will be residential and not commercial with a lot of young professionals taking residency in former offices that will be turned into apartment blocks such as is currently happening right now,” he boldly stated.

And he seems to have a point If the optimism we witnessed by some of the business leaders we visited in the city on this tour is anything to go by. These brave business leaders do not seem to be bothered by the prophets of Doom who do not see a bright future for the city.

“Yes, at Thunder Walker restaurant we were affected as buss-loads of people who had booked cancelled when xenophobia broke out in areas around the city in 2019, and also when the coronavirus resulted in lockdown. It was tough and we even contemplated as to whether we would still be in business. But right now the bookings are back, and in fact given the situation, we are doing pretty well,” he said.

“The level of collaboration, even among businesses that previously regarded each other as competition is amazing. And now instead of concentrating only on international tourists, we have realised we need to target domestic tourists for a sustainable future,” Garner said.

And his colleague Moyo agrees. “In fact this city, which is full of amazing history is actually on the come back trail. The biggest risk to a promising future of the city are not international tourists, for they love this city so much that they do not even want to go to other areas like Sandton because the truth is, the history of South Africa is embedded in this city, and no other city in the country has that. But only If South Africans stopped talking bad about their city, for its is ours who are making Johannesburg look like it is a bad city.

And these two are not just talking rubbish because they run businesses in the city. The media team was taken to some of the coolest places and establishments that we never knew existed in the  first place, making one to fall in love with the city  again warts and all. These establishment included fashion houses, restaurants serving great Afrocentric cuisines representing at least 50 countries of Africa, a book store selling African literature, a top class culinary school training confident, employable and independent young chefs, a top former exclusive gentleman’s club started by John Rhodes, which is now open to the public, as well as a top class fashion emporium owned by a well known fashion designer.

Please allow me to take you on a brief tour of Johannesburg as your guide.

On this tour after leaving that iconic building housing the Thunder at Gandhi Square we were taken to the Rand Club where we were introduced to its friendly manager Phill Thurston by Moyo. Thurston told us that the building has so much history, that is as interesting as some of the establishments and activities that take place there. For example the building’s steel structure was designed and built in the Uk and then shipped to South Africa. “Only the façade is locally made,” Thurston informed us before taking us on a tour that saw us in a library stocked with valuable, out of print books, some even as valuable as R2 million. There is also a book shop that sells from books to rare calendars and historic poster among other rare finds. A gentleman by the name of James runs the book shop in a venue that also dabbles as a jazz club on weekend.  Thurston also told us that the Rand Club now admits the public, unlike in the past when it was only catering fro the wealthy white males, excluding both blacks and white women. The point is anyone can just walk into a transformed rand Club, and no question asked.

The point again is t the beating heart of Johannesburg’s historic business district, astride its plunging seam of gold, stands Rand Club – a timeless South African icon.
Founded in 1887 in the fledgling days of Johannesburg, Rand Club is the city’s most enduring social institution and finest heritage venue. Whilst the magnificence of the Clubhouse draws the eye and stirs the spirit, it is the camaraderie within its walls that is the true hallmark of membership. Inside, you will encounter a diverse group of Members – creatives, entrepreneurs, professionals and eccentrics – each brimming with curiosity and uncommon perspectives. Today, Rand Club operates as an exclusive Member’s Club and destination events venue. As one explores the Clubhouse, one is left in little doubt that history is not merely on display. Johannesburg’s history has been made here.

Bridge Books is a unique bookstore in downtown Johannesburg founded By Griffin Shea. They believe in supporting African writers and in finding as many ways of getting books into the hands of as many readers as possible.

So they work with other booksellers across downtown Johannesburg, acting as a go-between for publishers in South Africa and smaller retailers who might not have access to new books. Check out their blog page for maps on how to find sellers on the street and stories about some of the vendors.

At their store in City Central, the new space at 85 Commissioner Street (corner Harrison), anyone can walk in and buy new and second-hand books, with an emphasis on African writers but with international titles too.

They are currently also busy setting up the African Book Trust, a non-profit that gives African books to libraries and schools across South Africa. If you’re a librarian, school teacher, or community group and you’d like to see how you can get books (for free, they will even send them to you), please get in touch. If you’re a reader and you’d like to know how to get their books through your local library, they can help with that too.

JHB Culinary & Pastry School opened its doors in June 2012 under the leadership of Kelvin and Jarlyne Joel. After many years in the industry Chef Kelvin identified a need in the industry for chefs who had both qualification and experience.

Starting from humble beginnings and being a private institution, they are proud to have had over 250 students since their inception. They offer students affordable quality education while allowing their students the opportunity to have on-the-job training while they study. As part of their curriculum, professional experience is a requirement, JHB Culinary & Pastry School offer 30% theoretical training and 70% practical training.

They offer City & Guilds international qualifications. They aspire for their students to succeed not only nationally but also opportunities to grow on an international level. JHB Culinary & Pastry School partnered with an astounding Le Castel Hotel School in France where they participate in a student exchange program. This offers their students an experience of French cuisine and ability to expand their skills and adapt to various environments.

The Thunder Walker is open for lunch and dinner Also open for lunch on Sunday 27 September. Experience one of the most astonishing spaces in Johannesburg and enjoy the most exceptional food.

The Thunder Walker is operated by JoburgPlaces

Go to town with JoburgPlaces. Go to www.joburgplaces.com for more info or send a whatsapp to 0828945216.