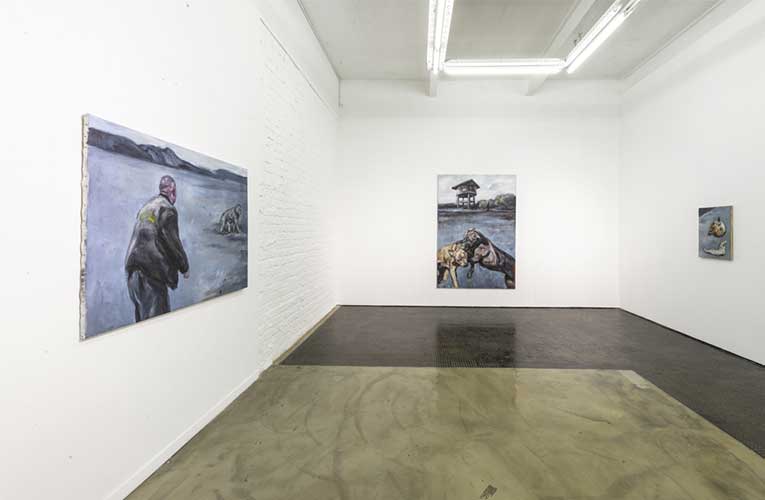 Johann Louw’s work which is at his exhibition entitled Artist Room, which opened at Smac Gallery in Stellenbosch on Saturday, October 3, running till October 31, is heavy. By this I do not just mean impenetrable, intense, or even depressing with its visual characteristics that might strike one at first glance. Rather, the potency of the work compels an imagining of a possibility, though latent, thereby inspiring a different reading of it.

For instance, does Louw’s work also carry some humour in it—can it? It seems not to in public imaginings as we rarely read or hear about it. However, humour and palatability appear to co-exist side by side with the nocturnal and strange in Louw’s world. It is perhaps this duality—this yin and yang—that is responsible for the heaviness as one has to possess the capacity to appreciate the demanding nature of Louw’s laborious repertoire. Though now a little too on the nose, heaviness is as much a curious term as is lightness.

Louw studied Fine Art at Stellenbosch University and graduated with a masters in 1992. He has exhibited widely and has participated in numerous international residencies. Indeed, he remains one of South Africa’s more prominent painters—one of my own personal favourites at the very least. I cannot recall when or where I first came across Louw’s work but I do remember the visceral intensity of that encounter. Like many, I had tried to situate Louw among a range of artists—likening his work to the Kentridges, Freuds, and Seville’s of the world but I quickly realised how Louw’s work refuses the narrative security that permeates South African visual culture and discourse. At some point I registered something peculiar about it. I could never really say, at least not with conviction, that Louw’s work deals with this or that subject. Even his titles foreclosed the possibility. I understood and related to the work at a visceral level. Heavy became a word I have since come to rely upon when thinking about Louw’s work because I lacked an explanatory entry point.

I suppose my greatest battle with Louw was trying to comprehend my own fascination with his work. This perplexity inadvertently allowed me to read Louw differently—lightly—in order to fully appreciate the studious pursuit that informs his paintings. As such, I deduced a heaviness in his darkish colour palette and the funerial aura it instantiates—translating into an allegory for intensity via the repetitive looping and perennially expanding subject matters, compositions, motifs, poses, props, and figurative gestures that take on the form of a forensic study.

Between his anomalous cinematic plots, his mere descriptive Afrikaans titles, and emotionally charged scenes, I can only assume some narrative arc exists. After all, narrative is the underbelly of much of our local art.

The human body, along with that of the animal—both central and ubiquitous—seems to always be captured in a state of mire and despondency. The palpability of human skin, of the flesh of the body—thick, saggy, contorted, and travailed—became material through which I anticipated the ins and outs of these scenes. But what we see is not necessarily what we always get with Louw.

Instead, we are prompted, prodded, and invited to construct our own narratives. We have the relative liberty to read into the scenes to our hearts’ content. This places the viewer relationally to the work, implicating them in whatever meanings they engender.

In some ways, Louw’s work refuses to submit to the entrenched strategies of representation. That is, strategies whose overall creative disposition have become standardised, pliant, and at most times, didactic. This problem does not affect figurative art alone, but also abstract practices Louw seems to always be subtly challenging the lines between abstraction (not to be read as the mobilisation of non-figurative visual motifs but as a kind of narrative withholding) and figurativeness through his work—restraint of the familiar, or suspense of convention. This is not to say Louw’s art should not mean or say something. Rather, what is peculiar in Louw’s work is the way he “says” things or suggests a questioning of the very prerogative to say and/or mean. A closer look of the work reveals this critical tension. One can not avoid seeing a strange vacillation between his passionate representations on the one side, and a sense of dispassionate withholding of narrative on the other.

Speaking to Louw on the phone recently, he let me in on a little secret. He said in this new body of work, narrative means are reluctantly adopted. Reluctant is the operative word here. It means they are used up to a certain extent. The thing is, he tells me, narratives quickly turn works of art into “illustrations.” In the South African art context, this avoidance might sound like an insult.

But considering how the sanctity of the narrative motif in art has rendered art into a news item, Louw’s work retains the relative mystic of artistic creation. His avoidance of illustrations inspired him to create images that suspend the impulse for “telling” the story by narrative means.

Thus I read this withholding not as luxuriating in silence or as neutralism; on the contrary. Louw seems to develop something else. In fact, this notable contradiction is itself indicative of Louw’s restless and errant attempt to reconfigure the very premises of painting, and of artistic creation.