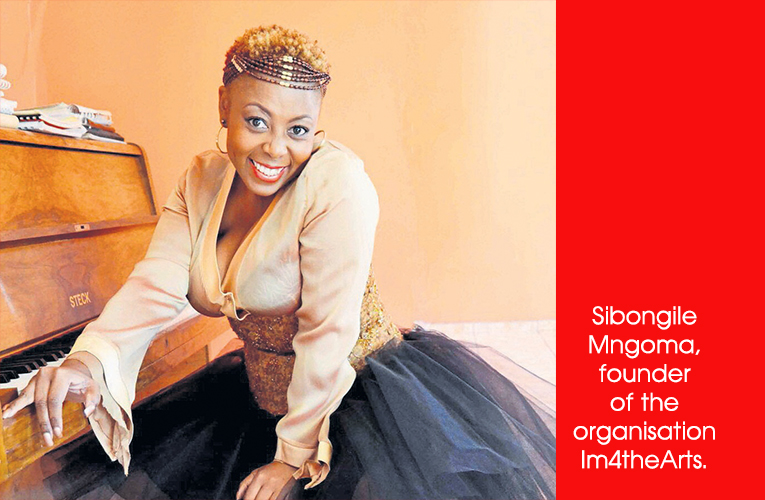 The wheels came off yesterday in the long running stand off between newly formed arts organisation Im4theArts president Sibongile Mngoma and Creative Industry Federation of South Africa (CIFSA). Mngoma who is also a well known soprano has in recent months emerged as an activist fighting for the rights and interests of artists, as she and others formally formed Im4theArts.

At issue seems to be the fact that CIFSA has been struggling to attract bona fide arts organisations, to justify its existence as a federation for all arts organisations in the creative sector in the country. Formed six years ago to try and unite artists in the country, the federation stands accused by many arts organisations of not representing the interest of the artists but its six national officials that get salaries from the millions they get from the Department of Sports, Arts and Culture every year, effectively making these officials employees of DSAC. The idea to form CIFSA was driven by DSAC itself, creating a situation that makes it look like it represents the interest of DSAC instead of  those of the arts organisations it is supposed to represent as a federation for the creative sector.

When it was formed it was during a time when government found it difficult to interact with artists as they did not speak with one voice, with no organisation representing the creative sector. The federation was formed when Paul Mashatile, now ANC Treasurer, was Minister of Arts and Culture. The idea was well intentioned, but it looks like it is now backfiring badly.

Since its formation, CIFA is said to have received close to R25 millions from DSAC and its books are yet to be audited, further straining its relation with the creative sector as they are seen to be working as a “decoy” organisation at best giving uninformed advice to DSAC, and at worst, working against the interest of artists it is supposed to be representing.

The truth is there seems to be a serious trust deficit between CIFSA and several arts organisations CIFSA has yet to attract into its fold in order for the federation to be truly representative of the creative sector as a whole. The outbreak of Covid 19 has seen the gap between CIFSA and arts organisation widen as the feeling within the creative sector is that CIFSA has the ear of Minister of Arts and Culture Nathi Mthethwa, and in many cases, influences the way in which certain critical decisions, for example the department’s response to the threat of lock down to artists’ livelihood, are made within DSAC.

Yesterday, Mngoma who was recently voted the first President of newly formed arts organisation Im4theArts hit hard at DSAC and CIFSA in a video broadcast that appeared on the organisation’s Facebook page. She accused CIFSA of being ”a mafia organisation” that has rendered  the Gauteng Provincial  Government’s Department of Sports, Arts and Culture and Recreation, MEc Mbali Hlophe and its officials paralysed.

“The officials have been intimidated and even the MECs have been intimidated by CIFSA and they are afraid of losing their jobs. The fact of the matter is CIFSA that the Department of Sports, Arts and Culture consults with regards to the interest of the artists do not have a clue about the creative sector. To them the creative industry is about music and nothing else.

“In fact they look at the creative  industry as music, Djs and parties. They have no clue about theatre or film. To them theatre is about the actual production on stage and they do not know that it is a whole machine, from costume designers, stage managers, lighting designers and many other people involved,” Mngoma said.

Mngoma questioned the wisdom of authorities relying on such people for advice, some of whom she questioned their integrity as a result of their past financial management history.

What seems to have enraged Mngoma and her colleagues is a cancellation of a meeting by the Gauteng Provincial Department of Sports, Arts, Culture and Recreation on Friday, to which arts organisations leaders were invited.

The virtual Zoom meeting was reportedly cancelled by officials as disagreements between CIFSA and Im4theArts and other organisations ensued, rendering the exercise unpractical. It appears there is no love lost between these organisations as CIFSA is reportedly hostile to Im4theArts, while Im4theArts does not recognise CIFSA as a genuine representative arts organisation. In fact Mngoma claimed on her video rant yesterday that people like her and other leaders in light of the cancellation of the meeting were told by one guy from CIFSA that they would organise another meeting with the MEC  “that would exclude the presence of the rats.”

Yesterday CITYLIFE/ARTS was unable to get comment from DSAC, CIFSA or the Gauteng provincial Government’s Depart of Sports, Arts, culture and Recreation. As soon as we get comments from the three institutions, we will update the story.

In the meantime you can watch the Sibongile Mngoma video  here: