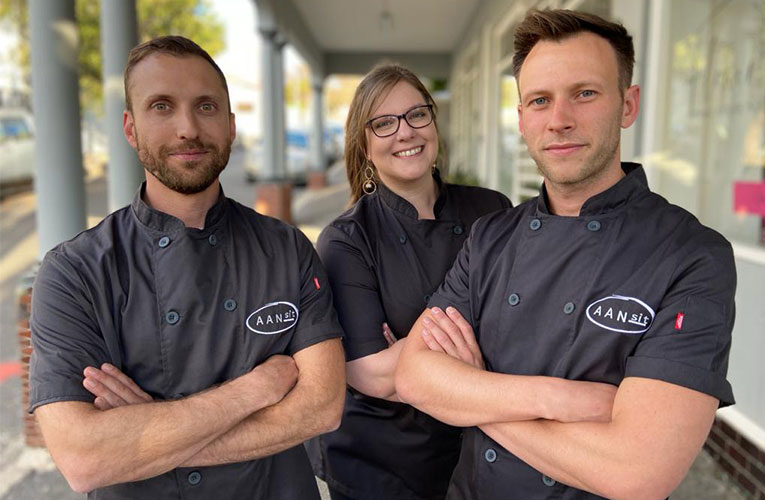 Chef Reuben Riffel, renowned South African celebrity chef and established restaurateur, knows that the true heart and art of culinary skills begins with home cooking. He’s travelled across the country in search of South Africa’s best home cooks with a knack for plating up some truly fantastic food at home in their very own kitchens.

Reuben’s latest venture is his brand new television series, AANSIT, which currently airs on VIA (DSTV Channel 147). In season 1 of the reality food competition show, Reuben challenges a trio of home cooks to come up with a restaurant–quality menu.

In each episode, Reuben is joined by some of South Africa’s top chefs to judge the contestants in their own homes. Appearances include, amongst others, Pete Goffe-Wood from MasterChef acclaim, David Schneider (Chef’s Warehouse at Maison), Wesley Randles (previously at The Shortmarket Club) and Kevin Grobler (former head-chef at Michelin-starred JAN).

Each team must create a food experience that will overwhelm the senses of the judges to secure a spot in the finals. The top two teams will battle it out in Reuben’s professional kitchen at Reuben’s and Co Cafe, located inside the Cape winelands luxury lifestyle estate, Val de Vie.

“It’s been a while since I hosted a show but it has been very inspirational to see how well some home cooks in South Africa know their food and have very good culinary skills. Going from home to home, we met some fantastic and very interesting people who just enjoy cooking for friends and family.

Some also have aspirations, and indeed the necessary skill sets and finesse, to advance into a culinary career. We had lots of fun meeting people and tasting their delicious creations,” says Reuben.

The season spans over 13 weeks and the finals will air on October 23rd. The winning team walks away with a grand prize to the value of R150 000. This includes a 7-night houseboat trip for six people in France, and a culinary experience at Jan Hendrik van der Westhuizen’s Michelin starred restaurant, JAN in Nice, France.

About the Winning Team: The winning team is dinner club friends Izak, Jennifer and Wessel. The team knows each other from university days and since everyone is back on South African soil, these friends decided to start a diner club where each has a turn to prove that they are worth their salt.

Each teammate has a distinct food style and brings different skills to the table. Wessel uses his background in food science to turn desserts into culinary experiences while Jen uses her food science background to create spoton flavour combinations.

Izak pushes the boundaries by using interesting and off-beat ingredients and cooking methods in the kitchen. Their first food memory together was cooking for a bunch of Spanish students in Barcelona where the three contestants prepared a South African inspired meal, complete with bobotie and malva, but of course with a twist.

Izak Redelinghuys grew up in Durban but it was his childhood December holidays along the Overberg where an interest in unusual ingredients such as alikreukel and periwinkles were peeked.

After his studies at Stellenbosch University, he went on to pursue a MBA in Food and Wine in Bologna, Italy. It’s in Bologna where his passion for seasonal and local produce blossomed. His food-centric family taught him respect for animals and that each cut and part should have it’s chance to shine.

Jen is a born and bred Capetonian with a real passion for delicious and beautifully presented food and hospitality. She loves to travel, and her trips generally revolve around the best places to eat and tasting local flavours. She gets a lot of her inspiration from her travels (and from her many cookbooks) and is happiest when hosting and feeding those she loves.

Her degree in Food Science and Nutrition has allowed her to combine her passion and her work and she is currently employed as a Culinary Specialist focussed on product and recipe development.

Wessel Pieterse is originally from East London where as a child, he spent most of his time in the kitchen with his mother Wendy. Weekends were spent around the tanks of his dad’s vinegar and fruit juice factory.

He pursued his love for food through studying for a BSc Food Science degree at the Stellenbosch University and practiced thereafter as a product developer. His food inspiration comes from a few months he spent in the south of France and Spain.

The theme for the teams menu that secured them a spot in the finals was nostalgia. Each team member chose an ingredient or dish that they used to hate as children and turned it into the hero of the day.

Their menu in the finals was still inspired by nostalgia but included off-beat and lesser known ingredients.

They drew inspiration from their travels in France, Italy and Spain to create a menu that won the judges favour and won them a trip to France and a dining experience at Jan Hendrik van der Westhuizen’s coveted restaurant, JAN. About VIA TV: VIA TV is located on DStv channel 147.