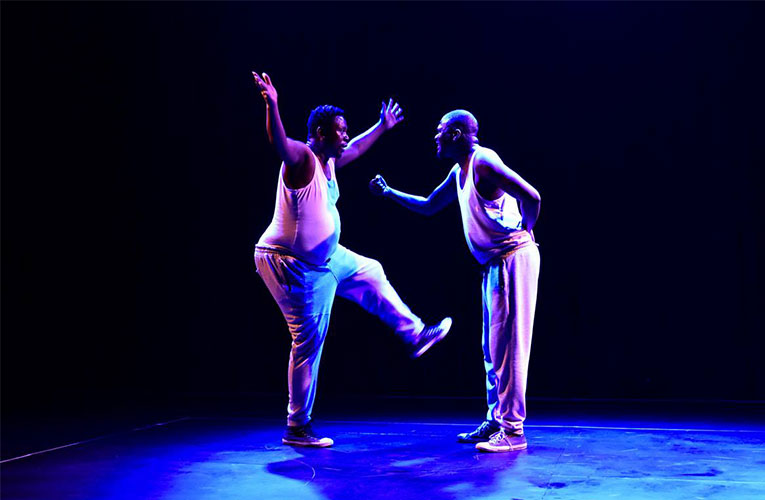 This political theatrical thriller, part of Arts Alive is brilliant

It almost felt unbelievably surreal. I mean the last time I attended theatre or any live show of any kind was last year. That was before the coronavirus struck and stopped all of us on our tracks.

And this time around, the experience was even more emotional because it was not any other show, but one that when I first watched it some donkey years ago, created by actor and theatre director Mncedisi Baldwin Shabangu, when he was still a student at the Market Theatre Laboratory, as part of Zwakala Festival, I just fell in love with this theatrical thriller. And now watching this play at Lesedi Theatre at the Joburg Theatre, after a long period of live theatre drought due to the lockdown,  became a special treat on a Sunday afternoon.

In  essence Vuka Machel is about two notorious village chicken thieves in Kanyamazane in Mpumalanga, who are not only obsessed with eating chicken, but their method of acquiring their delicacy is simply illegal –they terrorise village homesteads to steal chickens.

That is part one of Vuka Machel, but what the play is actually all about the reimagining of a future whereby Samora  Machel ,the former late President of Mozambique (who tragically and controversially died in a mysterious plane crash on South African soil in 1986), wakes up from his death to find out that his beloved Graca Machel is married to the former President of South Africa Nelson Mandela.

Machel feels betrayed by his friend at two levels –personally and politically. Politically, because he believes Mandela leading a free South Africa should help to stabilize and bring peace in conflict wreaked Mozambique, and personally because he has married his wife, and he is not instituting a commission of inquiry into the plane crash that killed him. But between these political dynamics and personal  complexities that are raised within the play, humour is cleverly weaved in to an extent that you forget that this is actually a revolutionary play dealing with complex unresolved issues located within the idea of the shape and form of post colonial Africa.

It is probably for this reason that many years later, the production is as interesting to watch as it was then.

You see, Vuka Machel is in terms of the genre, a political play, but it cleverly uses humour to disguise its naked, and not so overt political nature and agenda. That way, it is easy to enjoy.

And the two actors (it is a two hander) are just perfect for this production, and that is why it is going to be difficult in the future to cast anyone else except Shabangu and  Xolile Gama in this production. They are just so natural acting alongside each other, such that any attempt to try and cast anyone else instead of these two in the future will be almost impossible.

Watching these two actors deliver on stage with brilliance, what is essentially a political thriller clothed in humour, is an experience that has the ability to make one forget that the world is facing a pandemic.

However, the fact that before we were allowed into the theatre we needed to follow the health protocols, sanitizing, having your temperature taken and your details recorded  was a stark reminder to all of us that we are still facing an invisible enemy in the form of the novel coronavirus that  continues to afflict human beings throughout the world. Seating arrangement was also appropriately spaced.

This stark reminder was only the spoiler yesterday, and those who shared this experience with me will attest to the fact that when we left the theatre at the end of the one hour run of the play, it felt almost like the good old days  of live theatre before the pandemic sent our lives on an uncomfortable journey of  uncertainties where questions of our very existence is very much a central part of that journey,. But these old good days back yet, as theatres are only allowed to operate at 50 percent capacity under the current level 1 of lockdown.

For those who could not crack the invite to this closing live performance of V uka Machel, not to worry. The show has been recorded and will be available virtually to the public on November 1 as part of Arts Alive. For more information go to https://artsalive.joburg/.