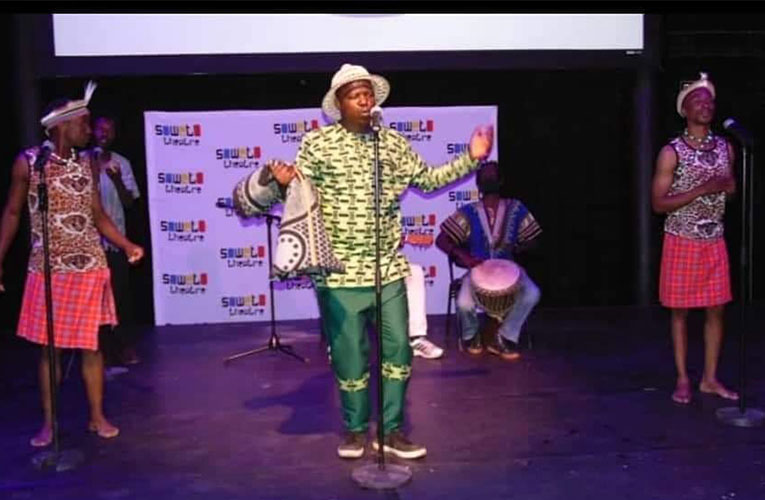 He has an unassuming character. No pretension of sophistication. In fact one could easily pass him in the streets as one of several ordinary people in Johannesburg trying hard to eke out a living in an economy that has become moribund, and is trying hard to extricate itself from the Covid-19 induced economic quagmire.

But hey, make no mistake about his sophistication. Behind the outward facade of simplicity  lies a potent poet, who becomes alive once on stage and whose poetry  breathes life on paper and has the capacity to penetrate the ears and heart of a listener or reader.

This is poet and musician EntshoPhuthi Lephasa Tsopia, is a musician and poet dedicated to putting the Sesotho culture, especially the language and its indigenous music on the global map

CITYLIFE/ARTs first ran a story about EntshoPhuthi Lephasa Tsopia in 2019, when he released his self-published  poetry anthology titled  Letotoba Dithothokiso  Tsa Sesotho  under his official name Motlalekgotso Ponya. Ever since he has evolved and remarkably turned his poems in this book into beautiful musical pieces that he takes to theatres, Shisanyamas and about any other place where he is invited to perform.

As a musician he goes by the stage name of EntshoPhuthi Lephasa Tsopia, and he has teamed up with a band to form a solid outfit whose musical repertoire traverses Sseotho traditional music to rhumba and anything in between.

“I have come together with Cacharel, a well known Joburg based musician originally from DRC Congo, and who for years, played with his band The Fantastic Guys. Not only has Cacharel helped with the technical production of  my newly released album of six songs entitled Letotoba, but he also plays the guitar and provides vocals as part of my band. He has also connected me with other musicians from  the other parts of the African continent, creating a sound  that is hard to define, but is characterised y strong indigenous traditional sounds, complete with indigenous instruments such as the Jembe drums,” explained EntshoPhuthi Lephasa Tsopia in an interview with CITYLIFE/ARTS conducted at that quack and popular with artists Newtown joint called De Peak.

So far, EntshoPhuthi Lephasa Tsopia, explained, the band has performed to much appreciation by the audience at Soweto Theatre, Busy Corner Shisanyama in Ebony Park, near Thembisa, as well as at The Joint, another Shisanyama in Thembisa. This was last year before Covid 19 struck and put many a musician out of business. However EntshoPhuthi Lephasa Tsopia  hopes that now that the restrictions have been relaxed under level 1, he and his band will once again be able to hit the road and tour southern African countries, including Lesotho, Swaziland and Botswana.

“In fact sponsorship forthcoming, we would love to tour the whole of SADC countries as we believe that our sound is authentically African, with lyrics delivered in various languages spoken on the continent, such as Swahili, French, Lingala and Sssotho. We would also welcome donations for musical instruments as currently that is a challenge we are dealing with,” EntshoPhuthi Lephasa Tsopia said.

EntshoPhuthi Lephasa Tsopia has not only evolved from being a published poet to a musician, but a fully fledged creative whose creative juices straddle poetry, music, fashion design and photography, collaborating with fellow creatives to deliver a full package of creativity to the market.

Besides Cacharel on this album, he has also worked with Dumisani Gumede, who plays the jembe as well as Damo Makgatla  as well as Prince Kalonga who helped with producing the album. It is this combined creativity that is apparent to the kind of sound that EntshoPhuthi Lephasa Tsopia pursues in his musical journey, fusing this neatly with his emotionally touching Sesotho poetry to create beautiful indigenous musical sound.