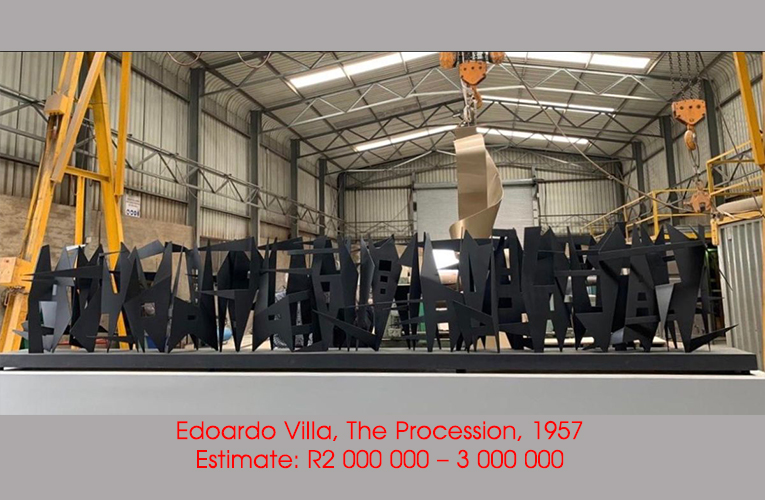 Art collectors will have a go for one of the most important sculptures to be put  up for sale in South Africa in recent years. This as Aspire Art Auctions unveils a large scale Edoardo Villa masterpiece for upcoming auction in Johannesburg.

Edoardo Villa’s Procession is one of the largest works he produced, exceeded in size by very few sculptures. His monumental Africa (1959–1960), measuring 6.7 metres, recently seen on the exhibition, Re/discovery and Memory, at the Norval Foundation was commissioned for the Union Pavilion at Milner Park in Johannesburg while The Knot (1981), commissioned for the Foreshore, Cape Town measures 6.75 metres in height.

Recognising how his bold sculptures complemented the built environment of the rapidly growing city of Johannesburg, Monty Sack, the celebrated modernist architect, commissioned this impressive work for the Carlton Butchery in the original Carlton Centre complex in the late 1950s.

Just under 6 metres in width, Procession explores the interplay between abstraction and figuration. The play of changing light and shadow across the abstracted forms suggests movement—particularly when seen from different angles.

Villa’s vigorous use of new materials, like steel, acknowledged international modernism while celebrating the achievements of the rapidly growing steel industry and his bold forms and spiky shapes forged a new aesthetic referencing both the stark African landscape and the art from this continent.

According to Karel Nel, “Villa’s use of steel is also symbolic in that it is a modern material, the product of a massive industry which played a direct role in the development of the economy of Johannesburg – and of his adopted home country”.

This consignment follows on Aspire’s success in handling works by Edoardo Villa. In March 2017, a record price for Villa was achieved when Aspire Art Auctions sold Vertical Composition (1958) for R1,818,880, also from the Monty Sack collection.

Procession is an exceptional work and is the largest sculpture that has come to the market to date. Estimated at  R2 – 3 million this impressive sculpture will be offered in our upcoming auction in Johannesburg on 3 September.

This sculpture can be viewed at Aspire’s offices in Johannesburg from Monday, 3 August through appoinment  by calling on +27 11 243 5243 to arrange a viewing.

Another art work that will grace this auction, which will take place on September 3, Illovo Edge – Building 3, Ground Floor, 5 Harries Road, Illovo, Johannesburg is the much talked about rare early work by renowned South African artists Gerard Sekoto called  In the beer hall, painted 1939/40.

It is the same painting that could not be allowed to leave South Africa for a Paris auction in March because it is regarded as a national treasure and therefore protected by legilsation.