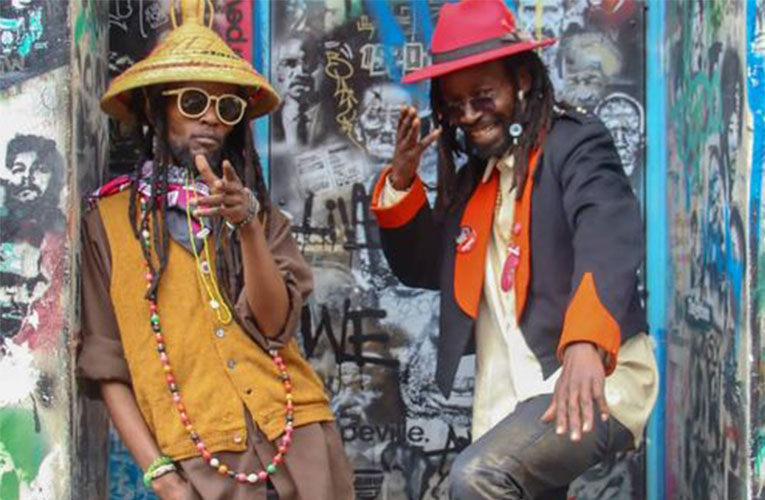 If you have ever visited Maboneng, you certainly must have seen a lone guitarist strumming his guitar at the famous restaurant, Mexicana on Fox Street. This establishment is obviously popular for its Mexican dishes. But one more thing that has distinguished this establishment and made it stand out is this often one man show mounted by guitarist, composer, poet and vocalist Hloni Kutu, otherwise simply known as Hloni..

He usually plays his guitar outside Mexican and the soulful tunes emanating from his guitar, are soft and suitable for diners as much as they appeal to passersby, Hloni has become a permanent feature of the vibrant Maboneng precinct, which since Covid-19 struck has emptied itself of the overseas tourists that had been a feature of this rejuvenated part of inner city Johannesburg, situated on the city’s eastern side.

The absence of overseas tourists however does not mean that the area has lost its vibrant character. It has not, and in fact the area is so busy these days, especially during weekends and holidays and it is as If Covid-19 never happened, as mostly  young South Africans throng its streets and fill up its restaurants, cafes and coffee shops, especially the busy Fox Street.

It is these young people that sometimes stop to watch and listen to Kutu do his thing at Mexicana before they spread onto the street taking pictures or rushing and disappearing into its drinking places only to emerge with a stagger close to curfew time. Diners at Mexicana establishment have also fallen in love with Hloni and his guitar to an extent they could not wait for his return when Covid-19 restrictions were eased.

The dreadlocked visual-artist-turned performance artist, however is not always alone in this journey of street entertainment. He in fact is part of a band that has made Maboneng its permanent home for years now, holding gigs in its cafes, coffee shops and art galleries before they made the flight to the north.

Azuri the band is made up of Hloni, who is in charge of vocals, guitar and composing,  Busitwe “Obi” Seage, who is a fiery djembe player and provides vocals, and the only female member Tebogo Ngakane, a professional model, vocalist and an influencer of note, with a sizeable following on social media around Johannesburg.

Corporate interested in soft music could do themselves a favour by booking this band for their corporate function. The band is also open to offers to perform at venues around Johannesburg. This band anchored by Kutu, and their sounds are infectious to listen to and watch perform.

The band favours collaborating with other creatives in the city, ranging from community creative groups, such as the Orange Grove based art outfit, Creative Gathering, a songwriters/musician Guild comprising mainly of urban Jewish and black artists  brought together by the common pursuit of creativity. This group (Creative Gathering) has so much going for them, including during lockdown when they collaborated on a number of projects virtually and in person when the situation of Covid-19 with its restrictions did not prevent them. It is during this time when they managed to release a song that is now on Spotify.

“When Covid-19 struck, it caught all of us by surprise. I was one of them who was affected badly to an extent that I had to leave Maboneng to live with family on the East Rand as I found myself without food. I could not perform and I could not paint either. I had to negotiate with my landlord where I live to reschedule my rent payment. Luckily the contacts with overseas artists that I made in Maboneng while performing here proved to be helpful during these hard times of Covid-19. For example, a group of Japanese musicians who first met me here performing in the streets and expressed the wish that If I could transate the songs into their Japanese language and perform them, they would be interested in a collaboration.

And when they got in touch during hard lock down, I told them about my situation and they moved into action and collaborated with me virtually to perform the songs that were translated into Japanese. And so, while I was at home with family, I managed to work with these Japanese artists and many in the community, including my family, were surprised to learn that people could actually work together virtually to create good music across oceans,” explained Kutu in an interview with CITYLIFE/ARTS, ahead of a mini-festival this Saturday called Social Distortion, which will take place at Mexicana on March 27 starying at 10am. Azuri  will be collaborating with a number of inner city based artists to interpret what the situation of social disruption that has been caused by Covid-10 mean in today’s context where inequality makes it almost impossible for people to exercise social distancing in South Africa in the face of Covid-19.