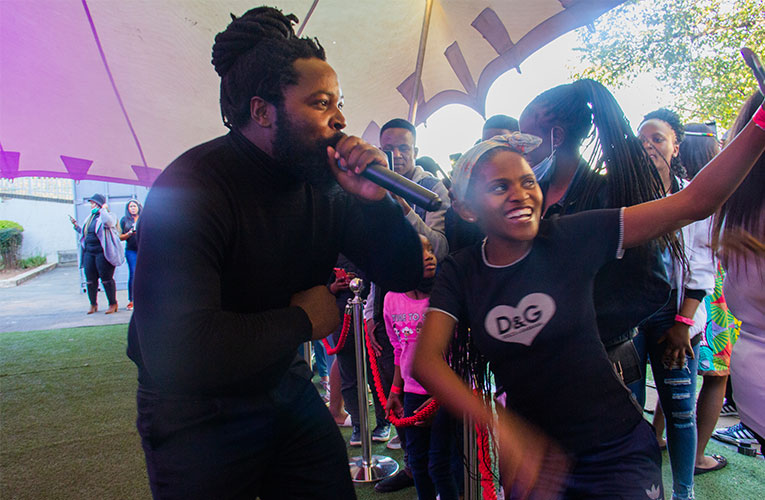 The day started off with a subdued atmosphere, perhaps even too subdued ,especially for a weekend of festivities in Johannesburg. And it was also  that  way because the number of people that could be allowed under the strict Covid-19 conditions were limited. What with the lingering and threatening Third Wave of Covid19 reportedly on the horizon.

However when a marimba band finished its set, a band playing Congolese music came on stage, and a few  bodies were driven to the dance floor, but still it did not feel like a party befitting Africa Day.

But when Big Zulu came on the make shift stage, set out on the car park of Windybrow Theatre in Hillbrow on Saturday, the few people that were there, numbering around 100, more bodies went on stage in a wild celebration of not so much of Africa Day as it were, but to recognize isiZulu rapper, Big Zulu, the Inkabi, as those who have embrace, love and are passionate about his music refer to him. Big Zulu is a fomer taxi driver turned mega rapper who in his short period in music has ammased masses of followers. His is a phenomenal rise to the top of rap music.

There were indeed wild celebrations on the parking lot of Windybrow Centre of the Arts, as the audience shared those experiences of watching  sterling performance from Big Zulu, the rap megastar from humb;le beginnings.

Among those dancing wildly and capturing the moment, freezing the action on their cell phones, were mostly women and children.  It became clear that Big Zulu is the people’s favourite at the moment. Besides those who were inside the venue, there were also several others that enjoyed the music from the comfort of the nearby block of flats, overlooking Windybrow Theatre.

They were seen watching the action from the safety and comfort of their home, some even whipping out their cell phones to try and capture Big Zulu in performance from the balconies of their apartments. Big Zulu has arrived, and the people, especially women and children simply love the man people sometimes rfer to as Inkabi in reEfrence to his past as a tax driver, and not a taxi hit man as colloquially Inkabi refers to hired guns who kill in especially taxi war situations. The rapper however has always mainteid that although he was once a taxi driver before he became this successful rapper, he was never inkabi in the true sense of the word.

Having tuned an isiZulu rapper, he has however accepted the word inkabi as a marketing gimmick.