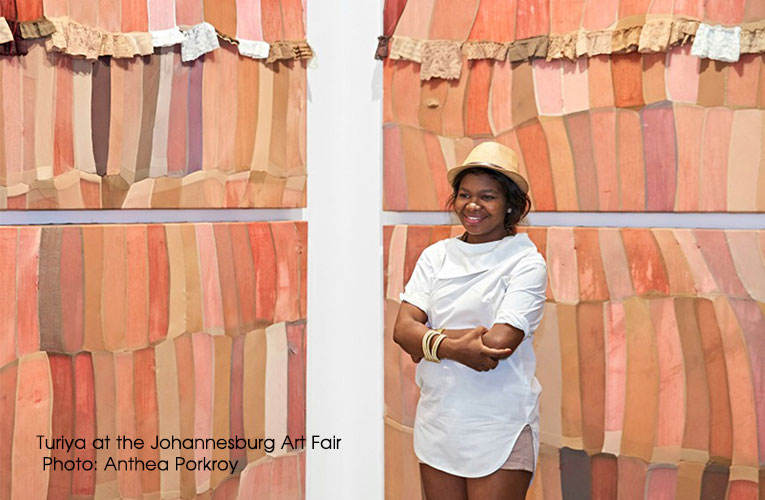 I first met visual artist Turiya Magadlela in 2003 at an apartment in Orange Grove, that she also used as a studio. I was there for an interview with her for an article I was writing for an arts supplement called Hola that was part of Sunday World newspaper. And that time she went by the name of Thando Magadlela, and eve r since she has dropped that name, and goes by the name Turiya.

It looks like her art practice and  her identity keep on shifting. At the time the artist used prison overalls that she picked up, and I do not know from where and from whom, and repurposed them to tell stories of a life of these prisoners that once wore them.

As she explained this, I found it quite fascinating If not curious, and that is turning prison garb, once won by condemned people into desirable pieces of art. That idea was fascinating enough. But what was even more fascinating for me was how she got those overalls in the first place. I can imagine by then a young woman visiting prisons to talk to whomever owned the prison garbs and say I would like to use them as art. It appeared to be a bizarre idea to me at the time.

That was then, but now Magadlela’s art practice, just like the way she wants to be identified (having dropped Thando in her name), has undergone some overhaul. For example, not only has Thando gone out of her life, but the idea of working with overalls as material is also gone too. Now she uses different materials to craft her artworks, that have since gained wide traction with collectors. These are not only in South Africa, but globally as well. Just recently one of her art pieces achieved a world record at an auction in Paris for the artist. The auction was co- organized by Aspire Auctions n collaboration with a Parisian auction house.

Her star is definitely on the rise in art circles , and it has been  on that trajectory for sometime now since she commenced practicing art full time..  She has just been named Artist of the Month for June by the Southern African Federation for Contemporary Art (SAFFCA), putting a spotlight on her art practice.

The founder of SAFFCA art collector and philanthropist Pierre Lombart takes up the story why the artist was chosen to be the Artist of the month.

“We have the pleasure to share with you that Turiya Magadlela has been selected to be our SAFFCA Artist of the month for June 2021.

After completing the second phase of the Nedbank head office project as architects, I met Turiya who was responsible for the Nedbank Art Collection at the time. Turiya was already animated fully by her passion for art making but was nervous to make the jump to a career of full time artist . Turiya freed herself shortly thereafter. So many people have been delighted since to engage with her artworks.

Panty hoses made their entrance in her practice in 2012 –– a garment with strong ties to matters of sexuality, gender, and the geopolitical exploitation of natural resources .

Turiya Magadlela emphasises that she never sets out to create political art, but that her works can’t help but take on a political dimension. They’re based on her own personal experiences and stories after all. “I take myself as my starting point. How else can you stick to the truth? I don’t make social or political commentary, but if my work seems or looks political, it makes me happy.”

We have the joy to present to you today 9 works by Turiya. Each of them forms part of her journey through life as a woman, a mother and an artist in South Africa.

“If you would like to become custodian of one of them, please contact us at foundation@saffca.com. They are available at R 42 000 each or R 114 000 for a series of 3. By purchasing one of her works you would, support Turiya in the pursuit of her career and the preparation for the installation at Palais de Tokyo in Paris, engage with her opus and share it with your friends, support the Bag Factory, META Foundation (the Non Profit arm of August House ) and SAFFCA, a Non Profit Organisations playing a vital role in the support of emerging artists,” said Pierre this week from Brusssels where he and his team were preparing the opening of SAFFCA, Europe.

Working with commonly found yet conceptually loaded fabrics (pantyhose, correctional service uniforms), Turiya creates abstract compositions without painting, fixed on wooden frames. Her work revolves around the racial history of South Africa and her experience as a black woman; its broaches the questions of difference and women’s condition. Turiya Magadlela has had seven solo exhibitions to date and has participated in numerous group exhibitions internationally, including Blue Black, curated by Glenn Ligon (Pulitzer Arts Foundation, 2017), The Past is Present (Jack Shainman Gallery NY, 2017), Les jour qui viennent, curated by Marie-Ann Yemsi (Galerie des Galeries, Paris, 2017), Blackness in Abstraction (Pace Gallery NY, 2016). In 2015, she was awarded the prestigious FNB Art Prize. She was short listed for the 7th edition of the Jean-François Prat Prize (Paris, 2018).