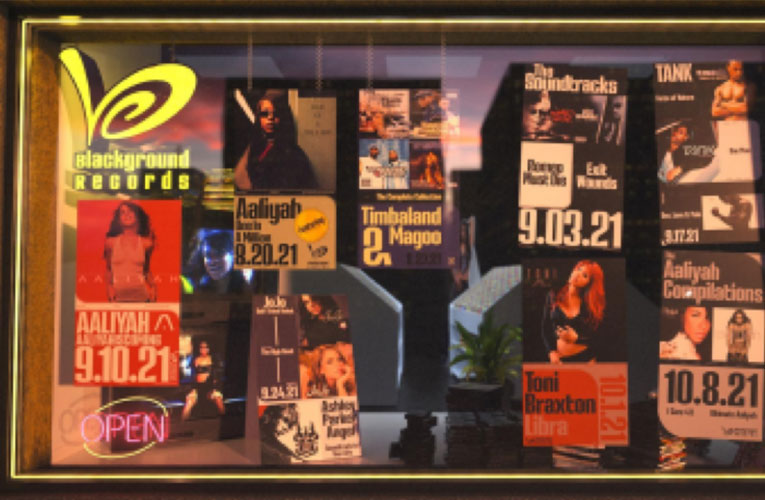 If you grew up in the 1990s, you would definitely know how a songbird called Aaliyah, dominated the global music charts, and how her life was cut short when it appeared as if she still had a lot to offer the world with regards to music.

However you will be happy to know that her music from that time, will soon be available for both download sales, and for purchase of physical copies. This is something that will please several of her fans, dating to that musical period of the 90s. This is thanks to a partnership between Blackground Records and Empire, who are releasing the legendary singer’s newly packaged music form the rich catalogue of her music.

Well, personally I grew up in the 80s, overlapping into the 90s, and the memory of these musicians’ conquest of the global music charts are still lingering in my mind. Though personally, R&B was not really my thing, but during that time, there was no way one would not have been affected in one way or the other by these musicians.

The deal between, the iconic Blackground Records, now Blackground Records 2.0, just announced recently, sees the iconic record label and  Empire, the leading independent label,distributor, and publisher, release Blackground’s storied catalogue to streaming services worldwide. The release will include catalogue material from Timbaland and Magoo, Tank, Toni Braxton, JoJo, Ashley Parker Angel and the late Aaliyah. Additionally, Blackground has announced a new entertainment platform Music360 set to launch at the end of this season.

available now at www.BlackgroundRecords.net. Having these musical offereings in various formats, especially the physical copies will satisfy the tastes of those still married to the good old days of consuming music, and there is a significant global market in that category, who simply love the physical product when it comes to music consumption preference.

Although personally I was into reggae, raga and world music, before my taste morphed into loving our own home grown kwaito, house, jazz and some classical renditions, R&B was very part and parcel of my generation’s musical tastes, and in many ways, I became a reluctant consumer of the genre.

The catalogue will be released in near chronological order, encouraging fans and listeners to enjoy and relive the music as it was originally released. The entire catalogue will feature 17 official albums. Some of the most notable discography from the catalogue will include both of Aaliyah’s  two platinum-selling albums One in a Million and ΛΛLIYΛH, along with her I Care 4 U and Ultimate Aaliyah compilation albums. Fans will also be able to listen to the soundtracks from the hit movies Exit Wounds and Romeo Must Die. In addition, the catalogue is also set to feature legendary rap duo Timbaland & Magoo albums Welcome To Our World, Indecent Proposal, Under Construction: Part II, and Timbaland’s own album, Tim’s Bio: Life From Da Basement. Also, R&B singer Toni Braxton’s Libra album, R&B crooner Tank’s Force of Nature, One Man, and Sex, Love & Pain albums, Jojo’s The High Road album and self-titled album JoJo, and the only album from Ashley Parker Angel, Soundtrack To Your Life.

Now I can imagine the fans of the music of the era in general, and the fans of R&B music in particular are salivating expectantly as they intend to revisit their musical tastes of their younger selves. Now below is are the timelines of the release, so that those interested can diarise when they would expect their orders.

● August 20th: Aaliyah – One In A Million Album

Founded by Barry and Jomo Hankerson and initially launched in 1993, Blackground Records became a staple name in music and pop culture in the 1990s and early 2000s with Hankerson’s expert ear for artist development that would evolve into prolific careers for the aforementioned artists.

“Blackground Records has always been about independence and ownership,” says Barry Hankerson. “From day one, we set out to shake up the music industry and partnering with a company like Empire continues that legacy. This is Blackground Records 2.0.”

As part of the re-release of the Blackground Records catalogue, Hankerson will launch a new social, audio and video entertainment platform called Music360. Further information on this new platform will be shared in the coming weeks.