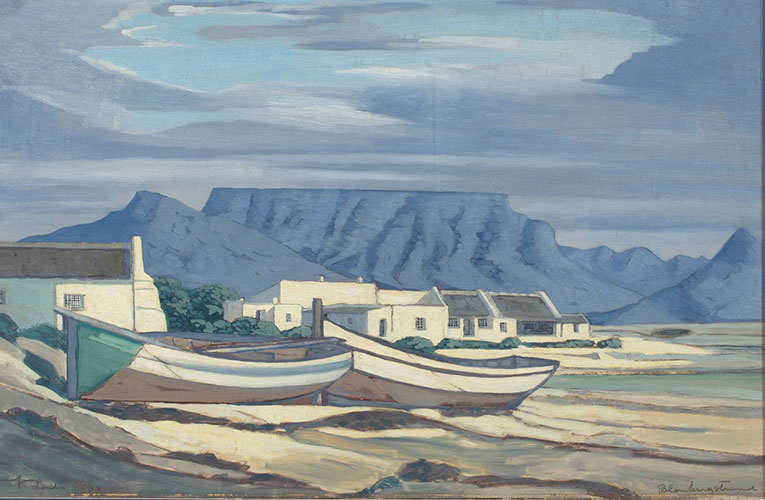 The selection comprises everything from the iconic to the unique

A majestic vertical landscape, a unique still life with red flowers, an arresting Cape marine landscape and an iconic bushveld scene with camel-thorn trees, all of them painted by J.H. Pierneef, form part of a trove of works by this celebrated modernist painter due to go under the hammer at Strauss & Co’s dynamic four-day virtual sale NORTH/SOUTH (8 – 11 November). The sale, which is open for bidding, will culminate in eight sessions livestreamed from venues in Cape Town and Johannesburg.

Painted in 1920, a time of consolidation and growing acclaim for Pierneef, Die Wolk (estimate R2.2 – 2.8 million) is a captivating vertical composition dominated a billowing highveld cloud formation. It represents one of the highlights of the Pierneef offering. The drama of verticality characterising this early work is enhanced by the artist’s decision to render the receding landscape from behind two tall trees in his immediate foreground.

“This skilful study of a bucolic highveld scene confirms Pierneef’s inventiveness and originality as a painter of the South African landscape,” says Bina Genovese, Strauss & Co’s joint managing director. “Pierneef’s ability to infuse his works with stillness and calm has made his work attractive to a broad range of collectors over many generations. This particular canvas features the label of Pretoria art dealer Emil Schweickerdt, an early promoter as well as patron of the artist.”

Pierneef collectors span many generations. NORTH/SOUTHincludes a pastel-hued valley scene by Pierneef consigned by the Tasso Foundation Collection, an important survey collection assembled by the Italian-born entrepreneur and collector Giulio Bertrand (1927–2018) of Morgenster. Valley in an Extensive Mountain Landscape (estimate R400 000 – 600 000) demonstrates Pierneef’s virtuosity in using a high vantage point to present a harmonious choreography of form and colour.

Pierneef’s strong emotional affinity to the South African scene is revealed in Kaap Bloubergstrand (estimate R2 – 3 million). This marine landscape invites the viewer to wander between small dune undulations and fishing boats, alongside the historic houses flanking the Bloubergstrand coastline, against the extensive backdrop of Table Mountain. The workwas painted in London in 1934 while Pierneef was engaged with the mural commission for South Africa House, and was acquired directly from the artist by the current owner’s father.

The cool blues and greys used by the artist in hisBloubergstrand scene also feature in one of the more unusual Pierneef lots to appear at auction in recent years. Painted two years before his London sojourn, Still Life with Pelargoniums (estimate R300 000 – 400 000) depicts a spray of five-petaled red flowers in a glass jar placed next to a ceramic vase used by the artist to hold his brushes. Pierneef painted still lifes throughout his life, but most often arrangements of African pots, pumpkins, gourds and bottles. This is his only known still life with flowers.

Painted in 1950, Bushveld (estimate R1.5 – 2 million) is an exemplary Highveld landscape dominated by a canopied camel-thorn tree. The painting’s subject and colour treatment showcase Pierneef’s sensitivities as a recorder of the natural world. The work was acquired on the advice of the artist from an exhibition of Pierneef’s work at the University of Natal in Pietermaritzburg in 1950.

Pierneef’s indebtedness to impressionism is evident in Die Eerste Reën, Liedenburg (sic), Tvl. (estimate R350 000 – 500 000), an early work from 1920 featuring a tilled landscaped rendered in vibrant yellow. Restraint and opulence characterise every Pierneef composition. Landscape with Wetland (estimate R350 000 – 500 000) is rendered in South Africa’s iron-rich earth tones and sees Pierneef favour a more graphic approach typical of his iconic woodcuts, two of which are on offer in NORTH/SOUTH.

Not limited to working in oil, Pierneef’s woodcuts have long been popular with emerging collectors. Printed in 1927, Doringboom, Potgietersrust (estimate R18 000 – 24 000) has already attracted a number of online bids in the lead up to livestreamed conclusion of NORTH/SOUTH.

Farmhouse in a Vast Landscape (estimate R300 000 – 500 000) is an exemplary casein painting that showcases Pierneef’s spontaneous notation when using this fast-drying medium.