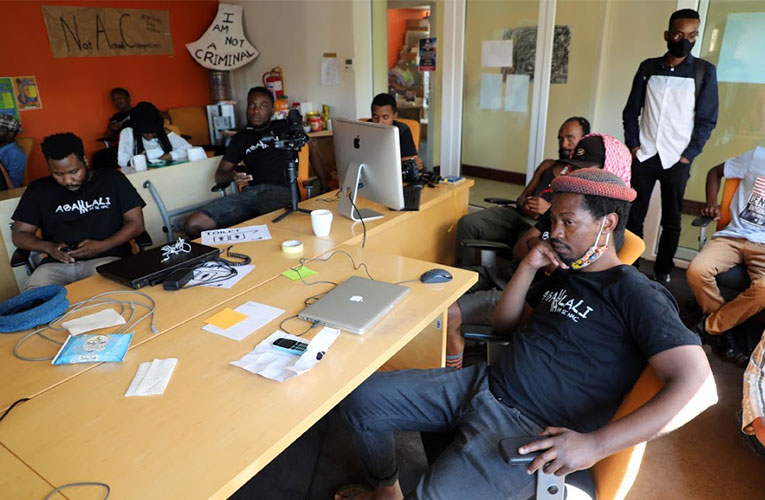 The group of artists that took the unprecedented action of occupying the National Arts Council offices in March, 2021, lasting 60 days there, are going nowhere even after leaving the occupation of the offices.

In a clear sign that they are going to be part of the feature of arts activism in the sector, Abahlali Base NAC as they called themselves since the occupation of the government arts agency’s building in Newtown from March 3, 2021 to April 30 2021, have now formalised their legal status. In their NAC occupation they were led by soprano Sibongile Mngoma.

This is a clear indication that they are not prepared to see the gains they made thrugh their recent action lose momentum in the creative sector as their sit-in forced public institutions such as the Public Protector and the Hawks to investigate the issues surrounding the chaotic disbursement of the Presidential Economic Stimulus Package(PESP) fund by the NAC. The NAC till today is struggling to pay qualifying artists the R300 million that has been allocated to it by Treasury via the Department of Sport, Arts and Culture. The NAC Council has also announced a forensic investigation into the mismanagement that happened with the PESP fund.  The NAC Chief executive Officer and its Chief Financial Officer Rosemary Mangope and Clifton Changfoot, respectively, are currently under indefinite suspension for an issue related to the PESP debacle. Currently it is not clear if or when they will face charges and what charges they are likely to face.

Meanwhile, Theatre And Dance Alliance, (TADA)an organisation representing the theatre and dance sector in the country, also launched its own investigation into the PESP debacle towards the end of May, led by well known playwright Mike Van Graan. Its report which was released on July 2, 2021, is scathing of the NAC, both the previous Council and the current NAC Council for the chaos that ensued relating to the disbursement of the PESP fund, calling for the current Council to be disbanded and in its place,  an administrator appointed, pending the launch of a call for a fresh round of recruitment of new Council members by Government. Authorities have so far not commented on the TADA PESP fund report.

“Abahlali-Base NAC comprised of a collective of artists who undertook a 60 day occupation of the National Arts Council offices in Newtown, Johannesburg has officially been registered as an NPC under the Commissioner of Companies & Intellectual Property Commission as Abahlali Movement Drive. The Movement with its company registration number 2021/ 703923/08 will now operate as a formal protest Action Group.,” the collective said yesterday in a media statement.

*“We will soon announce the official launch and  programme plan to continue with the amazing work that we started to do at the National Arts Council (NAC) when we staged a 60 Day sit-in at the National Arts Council offices earlier this year”, said Yuhl Headman speaking on behalf of the Movement. * The 60-day occupation was to protest against the NAC’s mismanagement of the R300 million Presidential Economic Stimulus (PESP) that was supposed to support the arts sector during the national lockdowns. The Movement is currently in engagements with the Public Protector and has called on artists, organisations, civil society, cultural & creative industries organisations, companies and federations to work closely with the ABAHLALI MOVEMENT DRIVE to change the landscape of the sector in South Africa.

“We are fully aware that there are many artists and organisations throughout the country who are still waiting for their Covid Relief Funding from our three spheres of government. This is unacceptable. We are also aware that the NAC and DSAC  (Department of Sport, Arts and Culture) are still busy with the PESP payments which were meant to be finalised by March but this has not happened”, said the spokesperson for the Movement.

Headman added that the Movement was “also closely monitoring developments at the National Lottery Commission (NLC) which suspended their application process while many artists throughout the country are still struggling. “As we lose artists every day, it is important to note that there is no clear Plan OF Action from our government with regards to the Cultural and Creative Industries (CCI) in South Africa, nor has the DSAC come back to the sector on the progress of the forensic investigation into the PESP debacle at the NAC”, added the Movement’s spokesperson.

He added, “ The Movement is planning to engage in robust discussion with all three spheres of government to ensure that the cultural and creatives in South Africa are taken seriously. The Movement plans to regularly update the industry on developments. The Movement intends to mobilise the industry behind its rallying song that reverberated through the NAC building during the 60-day occupation:  Hoya Rona (ere magwala a cheche) magwala a cheche, a chechele morao hoya rona ba pelo tse thata ko pele. #ArtistsLivesMatter #PayArtiststheirmoneyinfull #NathiTMthethwaMustGo #NACMustFall #DSACMustFall,” Headman said.