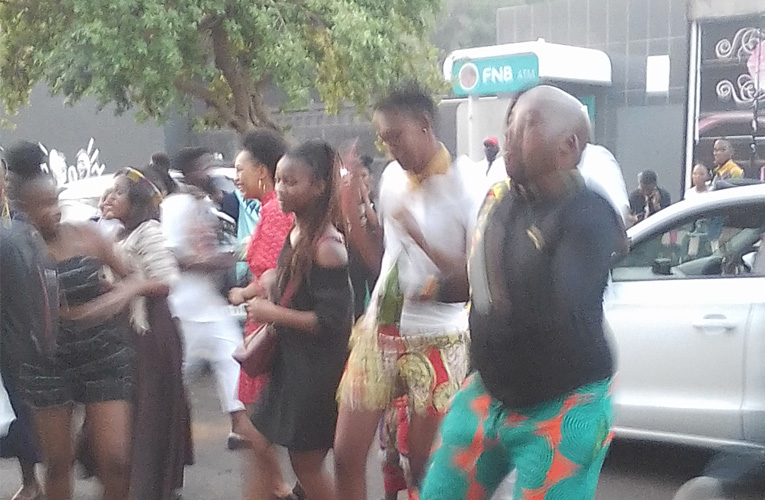 On Thursday, September 24, Heritage Day, a large number of people filed in and out of the newly launched building called Anthill, the building that once housed Museum  of African Design (Moad), which has since closed shop. The people that filed in and out of the Anthill building in Maboneng throughout the day, mainly artists and those interested in collecting art were attending the launch of three exciting arts projects in Maboneng. And these projects have the potential to make Maboneng a thriving home of the arts again, an important cultural element given the fact that in recent years, the place was starting to lose its art features, as it increasingly became a place of entertainment of a different kind.

The rejuvenated area  was becoming a place where mainly young professionals with disposable income come to dine and wine in its vibrant eateries and pubs. In recent months, especially during the last six months of Covind 19 lockdown popular art spaces such as the city’s only independent cinema Bioscope and the city’s only independent theatre POPArt have left the area, stoking fears that the area was now losing its once vibrant arts scene.

That was until the Anthill came into the picture on Heritage Day, adding more arts features to those that continue to be part of the mix in this vibrant community, such as visual artist Mary Sibande studio, David Krut Bookshop and Printmaking workshop, William Kendrige’s studo and his Centre for Less Good Idea, all located within the Arts on Main Building, a stone’s throw from the Anthill.

Thursday’ launch in the Anthill was besides the launch of the building, for three exhibitions, a curated film screening that took place in a new pop up cinema called Bantu Bioscope, a solo exhibition by Mozambican  artist  Sifiso Mkhabela called ‘The Mirror Has Many Faces,  an untitled group exhibition curated by Gallery Fanon, a new gallery that also opened on the same day, as well as the opening of The Project Space, ‘A Human Experience’ in their new venue situated within the Anthill premises/complex.

Today, Saturday, September 26, will also witness the re-launch of Artisan Weekly, a market that was first launched last year, shortly before it was discontinued due to the outbreak of Covid 19

That was not the only major launch in Maboneng on Heritage Day though, as a street away from the Anthill, a new multi-billion Rands development called Jewel City, comprising retail, office blocks, residential units, and a school among other features, was also launched on the same day, attracting large crowds of people.

The fact that it was Heritage Day was not forgotten by the visitors as they thronged the streets, in colourful traditional regalia, representing the diverse cultures of South Africa, ranging from Xibhelana, a well known dress code won by female vaTsonga over many years, to Seshoeshoe, won by baSotho.

The streets of Maboneng, especially the busy Fox Street that joins Maboneng to the newly launched Jewel City going all the way to the Mining District in the West of inner city Johannesburg, became a colourful theatre of busy bodies as random street celebrations that included dancing to the global hit Jerusalema by Master G, including a constructing a highly sophisticated choreography by these untrained dancers, took place. The scene was a colourful spectacle, to an extent that one would not even imagine that these are people who are slowly emerging from a gloomy and traumatic recent past that saw many families lose their loved ones to the global pandemic, Covid 19 .

Everyone now in South Africa knows someone who has either died or fortunately survived the infection from the novel coronavirus that has ravaged global economies and changed social life. The fact that the weather was perfectly sunny, enabling people to go out in big numbers, ensured that Heritage Day was celebrated in style by the vibrant community of Maboneng. It was as If people were celebrating their freedom as Level 1 of lock down allows certain social interactions with health protocols applicable still.