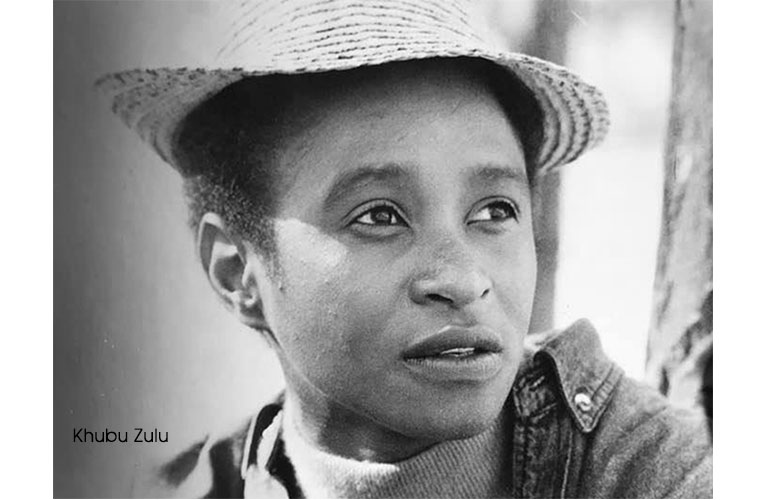 If you had met Khubu Zulu in the 1990s and 2000s, I am sure you would have known her as a filmmaker, one of a crop of black filmmakers who at the time were brazing a pioneering path in telling South African stories of post apartheid South Africa through the medium of film. These were brave filmmakers, both male and female, black and white, who were figuring out how best to tell the story of a country that had come out of apartheid and was grappling with the issue of figuring out how to construct a cohesive nation coming out of a difficult past.  And now trying to build a nation out of its diverse peoples, who were never always united, due to the politics of apartheid that divided people based on race and even gender, was always going to be a challenge for policy makers.

That was then, but Khubu now is wearing a new hat, her artistic career having taken a new, radical trajectory. Like she and her contemporaries did with filmmaking to various degrees of success, frustration and even failures, in the 1990s and 2000s, Khubu is now a fine artist, having taken yet another artistic  that is not less than revolutionary late in her life.

Revolutionary because though personally I had known her for years as a filmmaker, I ,had also known that she was also a director of theatre until about two years ago, just before Covid-19 when we met at an opening of an exhibition at Candice Contemporary Gallery at Rand steam, Richmond, Johannesburg. Having asked me to introduce her to the curator of that exhibition, Dutch curator  Els van Mourik,I hesitated when introducing her as I was not sure whether I must say she is a filmmaker or theatre director.  Just in time, obviously after noticing my hesitancy, she quickly intervened in time and said:

“Well I am Khubu, and I have done quite a number of things in life, including studying for my masters in Holland, and am now studying for a masters degree in fine art at Wits,” she told Elis confidently. I was relived.

Here is the issue. Khubu in recent years has gone on to register to study for a masters degree in visual art at Wits as she has turned into  pursuing telling stories about life inspired by places that she has travelled and lived in. through the language of visual art mainly as a impressionist abstract painter.

And the current exhibition, Aftermath at GodartStokvelGallery on 131 Albert Street, Cnr Nugget Street, Marshalltown, Johannesburb ,CBD, is her first solo exhibition as a fine artist, after spending 20 years in theatre and film.

According to her artist statement, Aftermath’, Khubu Zulu’s first solo exhibition, is a meditation on the climate crisis and global warming, drawing on African and global cultures, including Zulu mythology. Her abstract paintings reflect her concerns at how colonisation and the resultant neoliberal capitalist economy are putting the natural world and humanity under unprecedented strain and the need for us to reconnect with the essence of our existence to both heal and protect the planet.
But who is Khubu Zulu?

Khubu Zulu (b. 1968) is a fine artist from Johannesburg. Her creative style and process is both inspired by the city she resides in, her birthplace – Durban, KwaZulu-Natal – and the many places she has travelled to in Europe, East Africa and the USA.
She creates art as a practice of healing, preserving and reigniting memories from childhood, illustrating dreams and messages from her ancestors and experimenting with different mediums to observe how the mediums themselves inspire her creativity. She works mainly in oil on canvas and focuses on environmentalism, memory, pleasure and  politics as themes in her work.
Her style can be considered abstract expressionism. Motivated by her matriarchal lineage, James Baldwin, Jean-Michel Basquiat, and otherwise forgotten family photographs – Khubu has a perpetual urge to tell her story.

While this is her first solo exhibition, Khubu in fact has been far away from the limelight, crafting a fine art career for the past four years in Johannesburg.

The visceral, humanist work of Francisco Goya has also shaped her recent work. A visual storyteller at heart, Khubu has worked in film and theatre for over 20 years. . Like many artists in the internet age, Khubu connects with the art community by sharing her work through social media and forming a network with fellow artists while learning about their practice. Her work has been shown at a group exhibition along- side Phitika Ntuli’s sculptures at Wynberg Studios in June, 2017.

She aspires to share the experience of black life and history globally.

.Aftermath is still on at GodartStokvelGallery on 131 Albert Street, Cnr Nugget Street, Marshalltown till Sunday, may 6, 2021.