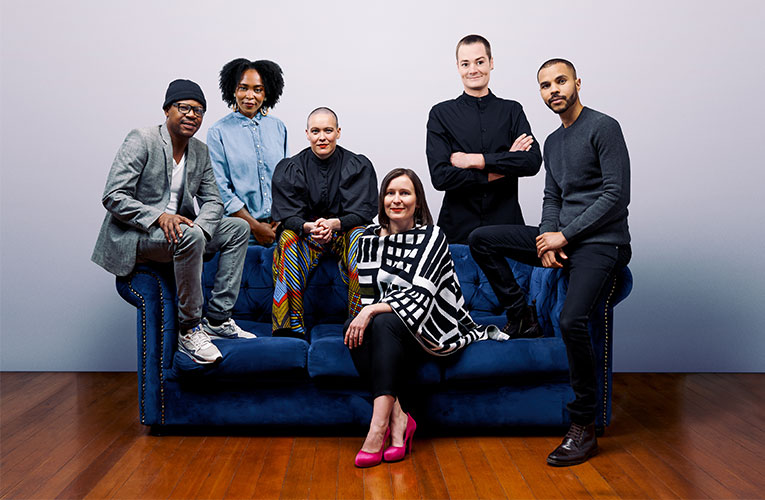 For South African artists who have made their mark on the arts scene, there can be no more sought-after accolade than receiving a Standard Bank Young Artist (SBYA) award. It is both a badge of honour and a golden opportunity; a recognition of creativity, originality, talent, hard work, ambition and imagination – and a platform on which to build in pursuit of new artistic achievements.

For almost four decades, the partnership between Standard Bank and the National Arts Festival that makes the SBYA awards possible has exemplified the kind of public-private arts partnership that supports and sustains boldness, innovation and excellence from South Africa’s artists. Each year, the announcement of the recipients is highly anticipated. And each year, this announcement is cause for celebration, not only among those whose names join the prestigious list of winners but across the country’s arts sector.

Standard Bank and the National Arts Festival have picked six Standard Bank Young Artists for 2021, and these are: Kristi-Leigh Gresse (Dance)

Each of these artists will receive a cash incentive, as well as a commission to premiere a new work or exhibit on the main programme of the 2022 National Arts Festival.

More than 160 artists have been recognised since the first SBYA award in 1981, and the alumni of the programme have shaped South Africa’s arts landscape (at the same time boosting the creative economy) over the past forty years. They have been subversive and provocative, and they have tackled the issues of the day head-on; but they have also produced work that remains significant, urgent and inspiring today. It is no exaggeration to describe their interventions as seminal – key coordinates on the national arts and culture map.

Last year, Business and Arts South Africa recognised the value of the SBYA programme by giving its Long-Term Partnership Award to Standard Bank and the National Arts Festival. Festival CEO, Monica Newton, observed on that occasion: “After all these years the SBYA Award is still an award that artists aspire to and one that the public recognises as a major endorsement. The recipients often go on to become household names overnight. We would like to extend gratitude to our partner Standard Bank, not just for this project but for their continued commitment to supporting South African talent.” Newton also offered her warm congratulations to the 2021 Standard Bank Young Artists. “Young artists in South Africa need the inspiration these individuals embody. Standard Bank Young Artists represent the reward for years of hard work and determination and remind us that we have great talent in our midst. I would like to recognise the exceptional achievements of the 2021 Standard Bank Young Artists; and we look forward to seeing them perform and exhibit at the National Arts Festival in 2022 and to seeing how they use this accolade to further their artistic dreams and ambitions.”

Kristi-Leigh Gresse has collaborated with a remarkable variety of South Africa’s dancers and choreographers, developing her own ‘voice’ as an artist as her work has cohered thematically around the politics of the body as well as expressions of collective and individual identity. She won a Standard Bank Ovation Gold Award for Sullied at the National Arts Festival in 2018 and went on to win the South East Dance Award at the Brighton Fringe Festival in 2019, before being commissioned to produce a dance screen offering for the digital JOMBA! Festival in 2020.

Vuma Levin is a guitarist whose compositions combine South African musical traditions with jazz, pop and electronics. He has lived and worked in Madrid, Amsterdam, Basel and Johannesburg. After teaching at various conservatoriums in the Netherlands, he returned to South Africa to take up a lecturing post at the University of the Witwatersrand. He has produced four studio albums to date, and his latest – the concept album Antique Spoons, which is also accompanied by the release of three short films – has been critically acclaimed for its virtuosity.

Buhlebezwe Siwani works in a variety of media, focusing on embodied performance, installations and sculpture, but also exploring the creative possibilities of the canvas, paper, photography and video. She completed postgraduate degrees at the Wits School of Arts and the Michaelis School of Fine Arts. Following residencies in France, Switzerland and the Netherlands, her work has been exhibited from Europe to Asia and Australasia to America. She has also published two books, Imfihlo (2015) and Qab’Imbola (2018). She lives in Amsterdam and Cape Town.

Cara Stacey is committed to contextualising and preserving indigenous southern African music, and to connect it to different musical histories and sound forms. She trained in piano and the umrhubhe, uhadi and makhweyane (traditional musical bows), and has also studied the mbira and budongo. In addition to being a composer and performer, she is a musicologist and scholar who holds a Ph.D. and is a Senior Lecturer in African Music at North-West University. Her work is described as “rich and complex, and at the same time beautifully accessible”.

Gavin Krastin is a performance artist, scenographer and arts educator. The National Arts Festival Artistic Committee notes that he has “revitalised the field” of performance art by managing to be “risky and brave” and, at the same time, “mindful and meticulous” – thus “opening the door” for a new generation of artists. Based in Cape Town, he challenges audiences with discomfiting meditations on the politics of representing the body within his immediate South African context and situating these local concerns alongside global considerations.

Thando Doni has worked extensively with independent physical theatre company Magnet Theatre and numerous other theatre organisations. He won Best Director at the Baxter Theatre’s Zabalaza Theatre Festival in 2011 and was awarded a GIPCA director’s bursary in 2012. The National Arts Festival Artistic Committee affirms that Doni is “one of the rare theatre-makers who works across the board – from young people to ex-offenders and professional performers” and that he crafts “profound and profoundly moving”, life-changing experiences for both performers and audiences.

“For almost 40 years Standard Bank has demonstrated its commitment to the arts by investing in the dreams of artists, changing lives of hundreds of artists and continues to find innovative ways to celebrate and showcase the talents within our borders.

To the 2021 Standard Bank Young Artists Awards winners, congratulations on winning such a momentous award, you have all worked so hard for this and now your efforts and dedication to the arts has paid off. We celebrate each one of you and we wish you all the best in your careers. This is the beginning of great things to come.” Said Desire Pooe Head of Sponsorship at Standard Bank