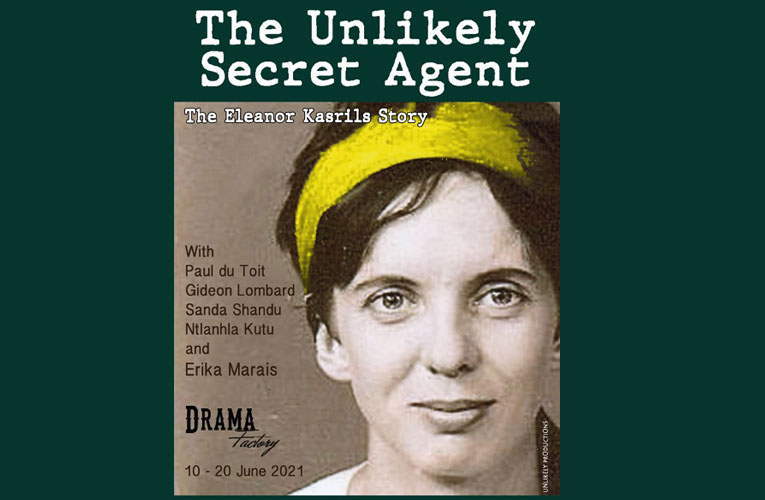 1963, South Africa. The country is on a knife edge. Political protest, sabotage and violence has engulfed the country. Government forces of the Apartheid regime, under Hendrik Verwoerd, brutally suppress resistance. Under the State of Emergency, the feared Special Branch of the police arrest anyone suspected of being involved in underground activities.

This is the setting for writer, actor and director Paul du Toit’s latest play based on Ronnie Kasril’s Alan Paton award-winning book, “The Unlikely Secret Agent”. The world premiere is on June 9 at The Drama Factory in Somerset West. The play tells a true story of bravery and hope in the face of seemingly insurmountable odds and stars Erika Marais, winner of an Ovation Award at the National Arts Festival, in the role of Eleanor, Kasril’s wife.

Marais, who also steps into the shoes of producer, confided that her research into Eleanor’s character found her sharing coffee, cake and memories with Kasrils last year: “We had already been chatting for months on the phone, zoom and e-mail. But meeting with him in person and having him share Eleanor’s inner life with me is proving to be invaluable in my preparation to portray Eleanor truthfully and to do justice to her character.”

Says du Toit, who also directs the play: “This is one of those South African stories that simply must be told. A story of sacrifice from someone who, though she would never consider herself one, is nothing short of a national hero. A story that reminds us of just how much these heroes were prepared to risk fighting oppression in our country.”

The plot focusses on Eleanor, an unassuming, young single mother who is arrested in Griggs Bookstore where she works in Durban and taken for questioning. The police are on the hunt for her lover, the notorious “terrorist”, Red Ronnie Kasrils.

There is no point in her resisting, the police “know everything”. But do they really? Eleanor is keeping a secret. She is a clandestine agent for the Underground ANC. But she must protect her comrades and Ronnie. She makes the daring decision to fake a nervous breakdown in order to be transferred to a psychiatric institution. From there, she begins to plot her escape.

“I am thrilled that  the dramatic story of a young woman’s courageous battle with the South African security police in the 1960’s, is  coming to the stage.” Says Ronnie Kasrils. “This is a brilliant script about what led a single mother to join Umkhonto we Sizwe, and how she managed to defeat her interrogators. Erika Marais has captured Eleanor, my girlfriend at the time, quite brilliantly. You will question yourself – could you have stood up against apartheid as this slender young woman did. “

The Unlikely Sscret Agent  will be staged at The Drama Factory, Somerset-West from 10-20 JUNE 2021.

Tickets from www.thedramafactory.co.za ranging from R130 to R160.