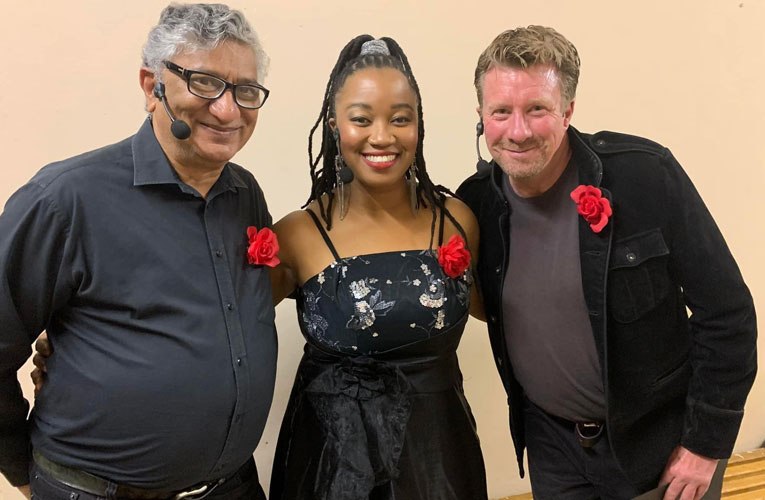 At the Naledi Theatre Awards last night (Monday, Monday May 16, 2022) the three of us were the Dawnalettes!

Congratulations to all the nominees and winners who took home the accolades last night. The biggest winner last night((Monday, Monday May 16, 2022)  was the collective spirit of the arts — a force that can withstand the havoc wreaked by a government that continues to show absolute disdain for the well-being and sustainability of the performing arts sector.

After two years of a hard lockdown, maladministration of the PESP and a weakening economy the Naledi Theatre Awards  proved that the arts will always rise like a Phoenix. And last night it rose even taller than a 100m flagpole and it did not even cost R22 million at all.

It was an evening of passion, celebration, high emotion, moving tributes, stunning performances and the occasional insults thrown to Minister Nathi Mthethwa by exuberant winners. Watching from the skies was undoubtedly the pioneering founder and champion of the awards, the late Dawn Lindberg.

Dawn was a member of Nathi Mthethwa’s Living Legend’s manifesto but in his usual lack of care and pathetic understanding of the arts sector he failed dismally at paying tribute to her when she died despite her name being written all over South African theatre history.

Dawn was a fighter for non-racism in theatre and anti-censorship. She made a remarkable contribution to catapulting the careers of some of South Africa’s cultural giants. Nathi’s negligence happened despite his esteemed title as South Africa’s Minister of Congratulations & Condolences

Dawn Lindberg was bigger than him. She had an invincible spirit as the First Lady of South African theatre. A theatre event would hardly be complete if she did not walk on its red carpet at opening night. Her legacy for advancing non-racial casting, fighting against censorship and speaking her mind with pearls of wisdom and the once in a while bloopsie has proven last night that her legacy will live long after her.

For 16 years, corridor and green room banter often nicknamed the Naledi Awards as Dawn’s Awards. Whilst this was done with hearty laughter or sarcasm it was undoubtedly Dawn’s Awards. She birthed it, mothered it and then like a real damn liberated modern day mum she didn’t wait until the awards turned 21 before she could hand it its Key to Freedom. After the awards turned Sweet 16 she gave it the heart, soul and spirit to go out, flirt with whoever, lose its virginity and to grow independently; and following which she wandered off into the heavens to direct an orchestra of stars who got there before her.

In the year before Dawn succumbed to Covid-19 she constituted a new board, appointed a CEO, put together a jury and left a blueprint for how the awards can continue even when she is sitting and watching it from her box seats from up in heaven’s auditorium.

Founder’s Syndrome is one of the greatest weakening links in the arts. Too often founders hold so tightly on the reins of the organisations that they found and they end up taking it to the graves with them. Last night, Dawn Lindberg must have been smiling with an incredibly naughty smile at everyone that used to cynically call the awards the Dawn Lindberg Awards. She proved them wrong. She was an antidote for Founder’s Syndrome. She was a leader with absolutely no doubt!

Little did most people know that behind Dawn’s huge driving force she was weaving and crafting a scheme that would give the theatre sector a huge dosage of hope, inspiration and courage to emerge from one of our darkest moments in South African theatre over the last three decades.

With every applause last night the Phoenix grew larger wings. It took a deeper breath and it rose higher.

Hats off to the Board of the Naledi Theatre Awards that took the reins when Dawn handed it to them. They rode the Phoenix last night; and inspired by Dawn Lindberg they are birthing a new dawn for the awards. One that we can all be grateful for that Dawn was just Dawn! There’ll never be a sunset!