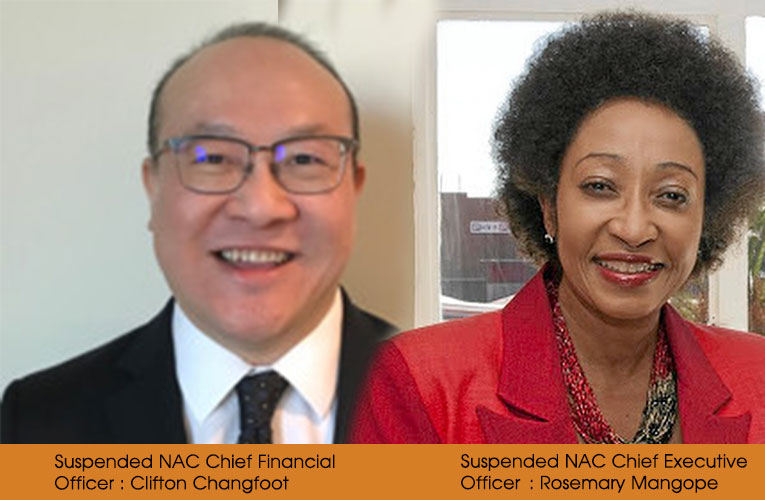 The Presidential Economic Stimulus Package (PESP) fund that was made available to artists was massively mismanaged, leaving artists in a vulnerable position, and therefore the term of the current National Arts Council members be terminated forthwith, and its members banned from serving on the Council for at least four years; and administrator be appointed. These are some of the recommendations emanating from an investigations report commissioned by Theatre and Dance Alliance (TADA) released yesterday, June 29, 2021.

The investigation was commissioned by TADA following the chaotic manner in which the PESP disbursement was handled by the NAC, exposing inefficiencies in its grant management system.

The report released yesterday at a virtual media conference, is especially hard hitting on the entire NAC, from management right up to the Council. In its findings, the report points a finger at both the previous Council and the current Council of the NAC for the debacle that ensued. The report paints a picture of a government arts agency where chaos ensued, as it lacked capacity to handle that kind of money within the five months allocated it and the extra staff that was hired had no training nor expertise in grant management. The report further points to possible criminal acts with both [previous and current Council members benefitting either personally or through organizations associated with them, with amounts running into millions of Rands in some cases..

“The new Council, appointed on 1 January 2021, while we have sympathy for their inheritance of a poisoned chalice, has acted with dishonesty, with arrogance and insensitivity towards the creative sector, and has lost the respect of the sector.

“For this, there needs to be swift and appropriate disciplinary action against those responsible in order to restore the credibility of the state institutions that should serve the interests of the creative sector.

“COVID-19 has had a devastating impact on the theatre and dance sector.  The PESP funding was supposed to inject much-needed assistance into the sector, but instead, its mismanagement by the National Arts Council has further compromised many already-vulnerable players,’ the report states.

The report recommends that “current and previous Council members who benefited illegally from the PESP funding be charged formally so that a court can decide whether the National Arts Council Act permits Council members or the organisations in which they are involved, to benefit from NAC funding during their tenures, and that should a court determine that NAC members have benefited illegally, that those member and their organisations be barred from receiving funding from the NAC in future for at least the time that they served on the Council,” part of the report reads.

This specification recommendation is regards to the recusal principle that often compromised individuals use when called out for a conflict of interest when it comes to being part of the decision makers in a matter in which they have an interest in its outcome. Some previous and current members are said to have been compromised in the current debacle as this important principle is said to have been either neglected or blatantly ignored  as some council members effectively directly or indirectly awarded organizations in which they have interest PESP meant to assist artists.

This investigation by  (TADA), launched at the end of March as a representative structure to advocate the interests of the theatre and dance sector, follows the announcement of two other investigations, one by the Public Protector, announced in April 2021, and another one launched by the current NAC council. Both those investigations reports are still pending.

However the NAC has recently  advertised for a tender for the forensic investigation, but already there are complaints that the terms of reference seem to preclude the current NAC possible culpability, even though they are entangled in the PESP scandal as one of the main players.

And here is a recap of what has happened in this ongoing saga of the PESP so far. R300 million was made available by National Treasury to the NAC in October 2020, and after retaining R15M for administration, the NAC had R285M to distribute to the arts sector to retain jobs and to create new work opportunities. These funds were to be allocated and spent by 31 March 2021, a mere five months to support and/or retain 17 000 jobs.  The four-year term of the previous Council of the NAC ended on 31 December 2020 and a new Council took office on 1 January 2021, and this period was simply too short to implement an arts project successfully, TADA believes.

The report is also scathing on the previous Council for their tardiness in over allocating funds to applicants when they knew the kit was not that big.

“By the end of 2020, the previous Council knew that they had over-approved the available budget by hundreds of millions of rand, and there were still many more eligible applicants to consider. The new Council, with little experience and no induction by the Department of Sport, Arts and Culture, unilaterally decided to change contracts awarded to numerous successful applicants and to slash the amounts of funding awarded to them, in order that all eligible applicants receive PESP funding,” TADA added in its report.

The National Arts Festival – one of the applicants adversely affected by these decisions – challenged the NAC in court and the Southern Gauteng High Court found in their favour, asserting that the NAC had acted illegally in unilaterally changing the original contracts, and ordering the NAC to pay the original amounts and to cover the legal costs of the NAC. (The NAC has indicated its intention to appeal this judgment).

When the debacle  gained momentum in March this year, the Minister of Sport, Arts and Culture, Nathi Mthethwa  announced that a forensic investigation would take place and the National Arts Council suspended its Chief Executive Officer (CEO) Rosemary Mangope and Chief Financial OfficerClifton Changfoot. However TADA in its report says that is inadequate and substantially self-serving.

“Because forensic investigations’ seldom point fingers at the institutions that commission them, TADA embarked on its own investigation to look at all the factors that contributed to this debacle which has directly affected many of TADA’s members negatively,” it argues.

At the Press conference, TADA representatives Mike Vann Graan who was the chief investigator and Yvette Hardie who co-presented the report were at pains to explain that it was not a definitive report.

“We would like to point out that this is not a definitive report and we invite others to investigate further this issue to add to what we have already produced in our investigations,” van Graan said, adding that the report would be sent to all relevant official departments. These include National Treasury, Parliament’s Portfolio Committee on Arts and Culture and the Department of Sports, Arts and Culture.

The key Findings in the report

.The short time (5 months) allocated to realise the ambitious aims of the PESP funding was hopelessly unrealistic so that the project was set up for failure from the start.

.The timing of the project i.e. the times at which the project was to be implemented, were the worst for a project of this ambition and scale, and its unrealistic time frameworks because

.A number of internal issues within the NAC such as the contracting of inexperienced project managers to assist with the PESP project; the lack of training of new staff; inadequate checking of compliance; the inadequate deployment of experienced staff to the PESP project; problems with the NAC’s Grant Management System; poor internal communication between panels and between the panels, management and Exco; adjudication panels not being told their budgets so that they approved applicants as if there were a blank cheque; management leading the Council to believe that there would be additional funding from DSAC – all these contributed to the over-approval and mismanagement of the PESP funding.

.The focus on jobs – while understandable and necessary in the context of COVID-19’s devastating impact on the creative sector – was outside of the mandate, capacity and expertise of the National Arts Council and represented a misunderstanding of the nature of the sector on the part of government.

.Members of the NAC – both the current NAC and the previous NAC – benefited illegally from the PESP funding.

.The new Council, appointed on 1 January 2021, while we have sympathy for their inheritance of a poisoned chalice, has acted with dishonesty, with arrogance and insensitivity towards the creative sector, and has lost the respect of the sector.

.That the relevant Portfolio Committees, Parliament as a whole and the Auditor General investigate and hold accountable the President, the Department of Sport, Arts and Culture and the National Treasury in particular for the delayed roll out of the PESP funding and the unrealistic time frameworks it imposed on the NAC

.That the Minister of Sport, Arts and Culture, Nathi Mthethwa, be fired for his serious misjudgement in not extending the life of the previous Council for three months till the end of the PESP Project on 31 March 2021, and for compromising the new National Arts Council.

.That the new National Arts Council, having lost all credibility with the arts sector and having shown poor judgment as reflected in its loss in the Southern Gauteng High Court, be terminated forthwith and its members banned from serving on the Council for at least four years; that an administrator appointed by National Treasury manages its affairs until a new Minister is appointed who will oversee the establishment of a new Council.

.That the previous Council and its Executive Committee in particular, its Audit and Risk Committee and its senior Management (the CEO and CFO) be investigated transparently for their roles in the mismanagement, including the over-approval of the PESP funding, and that appropriate disciplinary action be taken against them.

.That current and previous Council members who benefited illegally from the PESP funding be charged formally so that a court can decide whether the National Arts Council Act permits Council members or the organisations in which they are involved, to benefit from NAC funding during their tenures, and that should a court determine that NAC members have benefited illegally, that those member and their organisations be barred from receiving funding from the NAC in future for at least the time that they served on the Council.