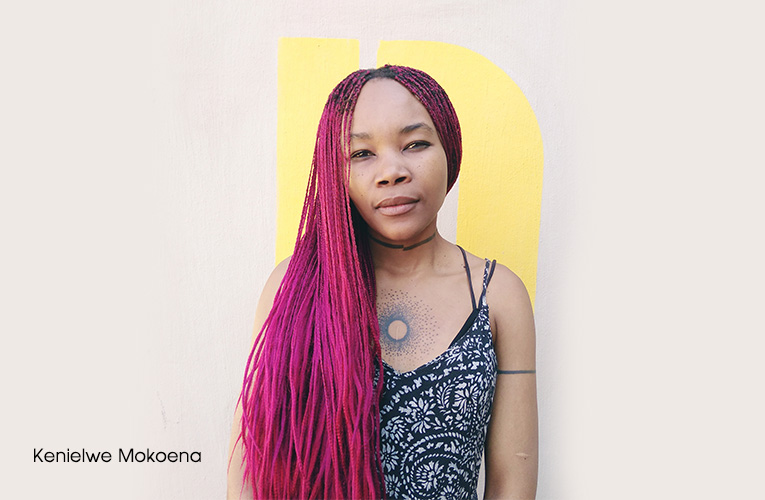 When it happened, it was towards the end of last year, sometime in November, 2020. It was during a period when restrictions around Covid-19 were relaxed, and limited but cautious contact among people, especially for the purpose of conducting business, was possible. That is when I first met visual artist Keneilwe Mokoena. Officially that is, because she insisted then that she and I, had met several times before at gallery openings around Johannesburg. I could not remember, but I did not dispute her version, simply because there was a time before Covid hit, from 2017 up to 2019, when attending exhibition openings around the city felt like one was at a festival. The atmosphere at exhibition openings was festive, akin to attending the National Arts Festival in Makhanda.

Promoted through an arts promotion  concept titled First Thursdays, that saw galleries around the city, from those in inner-city Johannesburg up to those situated in the north, such as the Parkwood, node, all open to the public until late at night. The openings were so packed and were always a hive of activity to the extent that there was little actual buying or actual viewing of the art works on the walls. But the truth is there was a lot of interesting human interactions and drinking, and some even would say, bingeing on the freely available liquor at these functions by hordes of the art tribe. Under such circumstances, it was possible to see someone, but not even remember having seen them the following day. Those were indeed interesting times on the visual art landscape around Joburg,  that is before Covid-19 spoilt the party for everyone.

Well, anyway, last year in November, Keneilwe and I met in one of the offices of the Anthill Building on Commissioner Street, Maboneng, the same building that used to house the now unfortunately defunct Museum of African Design (Moad), which surprisingly and unfortunately failed to gain traction with museum goers, and therefore eventually died a natural death.  I am though not the one to say why such a brilliant concept did not succeed on the African continent.  In any case, that is a story for another day.

For now, the focus should rightly be on Joburg based visual artist Keniilwe because right now, she has good things going on well for her in her visual art career. But before the part about the success and the visual art spotlight she is currently enjoying and taking in, context is important.

When we first officially met last year, it was for an interview, because at the time, the artist was preparing for her solo exhibition at Gallery Fanon, housed in the Anthill building.

Keneilwe’s exhibition that was about to go up then was called Untitled 1.0, Assemblages of Unknown Realities of a State of Mind,  That body of work delved deeply into the mystery of the universe and how everything else on this earth is inter-connected, and does not live in isolation to the other elements that are part of this universe, the artist had explained to me in the interview.

It was then that I concluded that I was dealing with a young artist, but a deep thinker, who If she followed that trajectory with a singularity of clarity and mind focused on it sustainably, she was poised for big things in the contemporary art landscape in southern Africa. My conclusion was not that far-fetched as things are starting to take shape in Keneilwe’s career right now.

.Essentially, Keneilwe’s art practice is predicated in exploring the universe and how the universe comprises of mysteries, of several elements, such as organic matter and inorganic matter for example, making a whole. She does this seemingly hard work by way of collages and drawing figurative features, mainly, but not exclusively using found objects and her own portrait. This process of creating art  and the sophisticated technique employed, results in a fine art object that looks simply beautiful, and yet carries complex messages about the universe and its myriad elements coming together to create either harmony or disharmony, or both. These contrasts and contradictions are the mysteries of the universe embedded in her art practice . You just have to look carefully at her work for a moment, and that message becomes clearer, as you will start to see both harmony and disharmony on her body of work, co-existing next to each other.

Speaking to this young artist in that interview, it was hard not to resist the temptation to conclude that  her art practice, like many other artists, expressing themselves through abstract art, makes her to appear to be somehow an idealist, looking for a world that perhaps only exists in her imagination, and maybe in the future, but not right now.

But again, when you engage her more, you are also left with no doubt, but a clear understanding that, you may not necessarily believe in her seemingly idealized world, that she seems to yearn for, but her level of conviction in that world, without doubt, maybe shared by many.

“As human beings, there are always spaces that we do not occupy, that are left empty. But again, it is the exploration of those spaces that offers us an opportunity to understand ourselves better. I have come to realize that life is interconnected. For example, bacteria, has always been regarded by many of us as something that is not good for us, but the reality is we need bacteria in our lives. I like to examine microscopic organisms, things that are not visible in order to understand the interconnectedness of life,” she told me then.

An example of Keneilwe’s fascination with investigating micro organisms in her art practice, is when in 2017, she worked with a microbiologist at Wits on a project for the RMB Joburg Art Fair, where she was part of the Talent Unlocked programme.

“In that project, I had bacteria that formed part of my body examined, and out of which, I recreated art works, representing those bacteria,” she said.

Essentially, through in  her art practice, Keneilwe explores her fascination with spiritual connection to the physics and mysteries of the natural world.

She does this by grappling with the meaning and significance of colours, shapes, and dimensions; and deals with the paradox of acknowledging that there are realities that exist within and around us that cannot be known.

Yesterday, July, 28, 2021, when I received a message in my in box that Keneilwe was chosen to receive the Artist of the Month honour from the Southern African Foundation For Contemporary Art (SAFFCA), I was not surprised.

This Fine Art graduate from Tshwane University of Technology is, besides, being a practising artist also,also many other things in the art world, notably, a curator and an educator.

Her work has been exhibited across Southern Africa including Pretoria, Johannesburg, Cape town, Eastern Cape, Swaziland, and internationally, including Brussels and Paris. As a recipient of the Reinhold Cassirer award for 2015, Keneilwe worked in residency at the Bag Factory Artist Studio in Fordsburg, Johannesburg.

Keneilwe curated several exhibitions in the Southern African region (including Maputo and Harare) for Capital Arts Revolution [an artist’s collective from Pretoria], and Social Life of Waste [S.L.O.W] Art – a network of artists, researchers, writers, gardeners and community developers working within the discourse of waste.

The artist facilitated art workshops for Pretoria Art Museum, schools in association with Capital Arts Revolution and the American Embassy, as well as various other organizations, including The Coloured Cube. As part of the Talent Unlocked Artist Programme facilitated by Visual Arts Network of South Africa (VANSA) and Assemblage. Keneilwe was chosen as a Top10 finalist for ‘Continuing Conversations – UJ portrait Award 2018. Towards the end of the same year Keneilwe worked as an artist in residency with SAFFCA, (Southern African Foundation for Contemporary Art, in Knysna, end of 2018.

In addition to these roles, since September 2019 Keneilwe is the director of The Project Space organisation, which mentors young and promising artists.

And being chosen Artist of the Month comes with a spotlight being shone on the artist and their art practice, introducing them to collectors, SAFFCA has made a selection of Keneilwe’s artworks available for sale and the proceeds will benefit a number of Non-Profit Organizations (NPO)s in South Africa whose work is in the area of contemporary art development.

“We have selected 12 intricately refined self-portraits, a series of paper collages which are made from hand-cut printed found images, and assembled onto A4 Hahnemühle paper. All are originals,’ says SAFFCA.

“This body of work is a personal exploration of my place in the Universe and all of existence. They are self-portraits delicately adorned with natural forms such as flowers, crystals and insects. I’m immensely fascinated by the natural world in all i’s forms and always relate these forms with the self.
Everything, microcosm to macrocosm, mind and matter, organic and inorganic, is interconnected and interwoven into beautiful patterns created by the forces of nature within and without my control,”adds Keneilwe.

“By acquiring some of these works you will support Keneilwe in her career while supporting the Bag Factory, the META Foundation and SAFFCA Foundation in their essential role as non-profit organisations in the Southern African Art ecosystem. Please contact us at foundation@saffca.com and once payment has been received the work or works will be sent to you within the borders of South Africa. If the works have to travel abroad, all costs related to the delivery of the works will unfortunately be the responsibility of the purchaser,”adds SAFFCA..