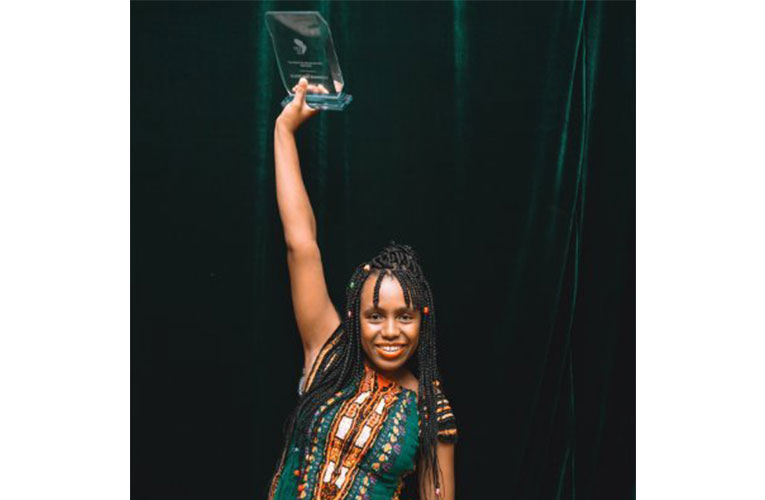 Rešoketšwe is a chemical engineer, writer and enthusiastic (novice) pizza maker. Her poems have been shortlisted for the Sol Plaatje EU Poetry Anthology; she won the 2019 Writivism Short Story Prize and, most recently, the 2019/2020 Dinaane Debut Fiction Award. She lives in Cape Town, where she is completing her PhD at UCT. She’s been known to occasionally wander to the Arctic region, where she fell in love with blueberry pie and a small rural town with a name that is difficult to pronounce. The a=new author has been warmly welcomed to the Jacana Media family of authors and we’d love for you to get to know her better too with this Q&A.

Her new book Scatterlings is a brilliant piece of writing, telling a story seldom told in South Africa. It is a compelling, original novel, ambitious in its form, with a pioneering depth of research.

CITYLIFE/ARTS : Share the playlist of songs and artists that you listened to while you were writing your manuscript. And did your choice in music change when the book went into production? How did it change?

Rešoketšwe : Ms. Jackson’, by Outkast: for some odd reason, this song just relaxed me, especially when I wrote Alisa’s chapters. I literally played it for hours on repeat. (), the album by the Icelandic band Sigur Rós: the band has a very calming sound. I also listened to Valtari and Ágætis byrjun, other albums from the same band. And their songs, ‘Fljótavík’ and ‘Ára bátur’. But, overall, I listen to a lot of music; I listen to everything. But I mostly wanted music that calmed me, not necessarily music I could sing along to, because I found that distracting. My choice didn’t change at all. These were songs that I already liked.

CITYLIFE/ARTS :When you look up from your work space or desk, what do you see?

Rešoketšwe : I see my plant and the pile of books I want to read before the year ends. I also see my stationery, pictures of my family, and (plaques of) the few awards I’ve won so far in both academia and my writing career.

CITYLIFE/ARTS:  If you look at the first few lines of your book now, can you remember where and/or when inspiration struck to write your book. And did a character(s) come fully formed? Give us an example.

Rešoketšwe : Perhaps, strangely, the first few lines I wrote ended up in the middle of the book, because I initially envisioned the book as a novella, and so the book started there, with the sentence that ended up as: “But whatever else could be said of Johannes, it couldn’t be said that he was inconsistent in his convictions.” I remember the precise moment the inspiration for the book struck; it was on 31 January 2015, and I was visiting a friend in Cape Town. I’d been experiencing a writer’s block for a while with a novel I’d started in 2014. I was desperate to finish that novel, it became like homework, like a test, and it consumed me more than it should have. My brain went into overdrive, so even when I slept, I dreamt about it because, I assume, my brain was still trying to work through the knots I’d created with the plot. But one night I dreamt about something entirely different – the characters that would eventually evolve into Dido, Alisa and Abram. The characters certainly didn’t come fully formed; for example, the more I wrote, the more it became clear that the book couldn’t start where I had initially started it. So characters like Mmakoma (or Gloria) and Johannes were more fleshed-out in later drafts.

CITYLIFE/ARTS : Give us a list of the books and their authors that are currently on your bedside table?

Rešoketšwe : I have The Story of Anna P. as Told by Herself, by Penny Busetto; New Times, by Rehana Rossouw, and the 2016 Caine Prize anthology. That’s because for some weird reason I can’t read one book at a time. Once, in 2019, I read four books at a time, and I regret nothing.

CITYLIFE/ARTS : What are the items that you absolutely have to have with you when you sit down to write?

Rešoketšwe : My notebook and pen, and sometimes a ruler. I start most of my stories with pen and paper, and not on my laptop. I started Scatterlings with pen, paper and a ruler.

CITYLIFE/ARTS: Which book(s) and/or author(s) made you decide to become a writer?

Rešoketšwe:  I started writing with poems and short stories; that was because I did English as a second language in high school, and we read and analysed short stories and poems. That’s when I fell in love with literature. But the first time I read a novel and thought to myself, “I could do this too,” was with Stephen King’s The Eyes of the Dragon and Carrie. Carrie because it was my first time reading an epistolary novel. I didn’t know something like that was even possible. The Eyes of the Dragon because it also broke the rules (at least for me) in such a marvelous way. It fascinated me. I wanted to do something like that, I wanted to see if I could do it.

CITYLIFE/ARTS: Who do you write for? For yourself or the reader? And why do you think that is?

Rešoketšwe : I think Yaa Gyasi also said this, when I wrote, I obviously nurtured a secret hope that one day someone might publish my work. But honestly speaking, I didn’t think I would ever be published, especially around 2014/2015, when I didn’t even have a single poem or short story in any literary magazine/journal. And Scatterlings, especially, is something I never thought would ever be published. I’ve always had higher hopes for the project I started in 2014. So I wrote in a sort of vacuum, and I think it was liberating because there was no expectation from anyone. The story and characters could evolve however I wanted them to, without fear of what a reviewer, editor or publisher might think. It was a personal experience.

CITYLIFE/ARTS: Tea or coffee while you write? Or something stronger, perhaps?

Rešoketšwe : Lol, I don’t eat or drink while working. It’s too distracting. Eating and drinking are for when I take breaks. Plus, I’ve spilled stuff on my laptop before. It didn’t end well. Even when I go to a café to write, I usually eat first.

CITYLIFE/ARTS Do you have any lucky charms that you keep on your desk?

Rešoketšwe : Yes, I do. But I’m superstitious enough to think that if I said what they are, they wouldn’t be lucky anymore.

CITYLIFE/ARTS: Have you started conceptualising or writing your next book, and what is it about?

Rešoketšwe : Absolutely yes. I’ve gone back to my 2014 project. I’m happy to say that after six years of wallowing in a rather profound writer’s block where that particular manuscript is concerned, I’ve resolved the plot. I’m superstitious enough to think that because Scatterlings has now been published, some cosmic alliance made the plot resolution possible. The story follows Jhoni Naya Keet, a twenty-seven-year-old engineer who often has to question whether her experiences are a dream, a memory, or if they’re actually happening; and she must navigate all of this while trying to find her missing sister. With the way I’ve structured it, I can’t say anymore without giving away key plot points. You’ll have to wait for Jacana to put it in bookstores before you get the rest of the story.