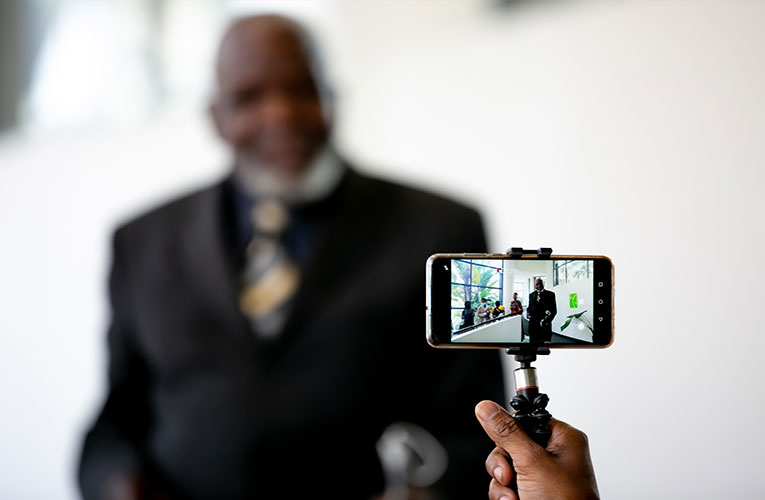 The invitation said we were going to participate in the making of the art with the artists behind this conceptual exhibition that clearly seeks to unite a divided nation. Let us agree on w=one thing, and that is that South Africa today is different from the South Africa that existed in 1994, even a few years later. During 1994, and a few years that followed, hope for a better future was hanging in the air. Hope for a united South Africa in its diversity was the common narrative driven by intellectuals, politicians, the media and almost by every influential person. At the time, it almost felt like we were all reading from the same chapter, singing from the same hymn book and we all looked forward to a nation in construction where the divisive past simply belonged there, in the past.

But today, South Africa, 27 years after the miracle that everyone spoke about in 1994, seems to be dangerously movng in a wrong direction, a tr5ajectory that makes even the most positive and optimistic for once doubt whether we celebrated the miracle that was not a miracle too early. Race relations are not a their best, the concept of social cohesion seems to be elusive and the future seems uncertain. We all need to revisit that spirit that united us and made us realise that in diversity we are stronger and that diversity need not divided us, but remind us how beautiful to be a a colourful nation divided by the rainbow colours.

It is within this context that a current exhibition entitled Nkosi Sikelel  which opened at Goethe-Institut Gallery in Parkwood, on Saturday needs to be read and understood. This is clearly an attempt by the artists to remind us of what we once were, and what we could still be If we try, only that this time we need to try harder than before, in 1994.

Now our problems are complex, and the issues that were forgotten, parked at the back of our minds seem to be haunting us and in the process dividing us. We are a nation in pain and that is yearning for healing. The opening was also quite dramatic as we were indulged in a prayerful Sesotho traditional praise poem by an invited poet whose name has slipped me. He gave such a powerful rendition and the audience were invited to participate.

Isaac Zavale and Huston Wilson have come up with a powerful concept, using the idea of the national Anthem as the glue that makes the vision of a united nation possible. The national anthem itself was a product of compromise at the negotiation table. It took part of the past into the present, and part of the present to envision a future of a nation.

If anything the two artists clearly understand where South Africa is at with regards to politics and race relations, and that current reality does not reflect the best that we could be.

For example, the audience at the opening of the exhibition were encouraged to express themselves on the walls left white by the artists. You could write anything in your mind around libertarian principles of social justice and democracy.

And indeed those who were at the opening expressed themselves without fear, and most of the messages scribbled expressed a desire for a blessed South Africa, and that itself suggested that the country was not in good space.

In the minds of many who dared express themselves, they must have had the recent unrest in mind, that saw the country going up in flames, literally as shopping centres and malls were set alight, lives  lost unnecessarily, R50 billion Rands knocked of the GDP within days, making worse the already  situation of unemployment in the country.

All this means that in conceptualising this exhibition titled Nkosi Sikelel, a lot of thinking went into it. It is clearly an exhibition aimed at making a viewer to reflect on where we are as a nation with regards to social cohesion and possibly heal and envision a better future than the present we have.

Nkosi Sikelel is a project initiated by Isaac Zavale and Huston Wilson. The visual intervention focuses quite literally on the famous phrase, its various translations, as well as the style of mural text that has come to be associated with township commerce and spaces of consumption.

The phrase comes from the South African language of isiZulu which is represented alongside South Africa’s other ‘official’ languages. The song however, was originally composed by Enoch Mankayi Sontonga (c.1873 – 18 April 1905) in 1897 as a Christian hymn which was then later adopted into a Pan-African liberation song, with some versus used in the national anthems of nations such as Zambia, Tanzania and Namibia. In 1996, a shortened hybrid version, combined with the Apartheid anthem Die Stem, was composed and announced as the new national anthem of South Africa.

Nkosi Sikelel was rewritten with the intention to encourage hope and resilience in the attempt to unite a largely divided country, while also acknowledging the many languages spoken. The artists seek to do the same by using the space to encourage the sharing of positive messages, imagery and prayers for the nation.

The idea comes as a response to the recent unrest caused by tribal divisions within our government and quite clearly, within our society. Singing the national anthem, is the singing a praise poem. A poem calling us together. Nkosi Sikelel aligns itself with this call and asks that the audience find their own way to do the same.

The installation is designed to visually map the various translations while creating a sense of spatial illusion by using bigger-than-life text and the bold colors from our national flag. In many ways the mural style used by the artists represents a visual language, where text is treated as an art work. Whether an art of rebellion or retail, the artists intend to use a number of activations and mediums to explore the conversation, call and message. The exhibition builds on the mural text design featured in the last Goethe-Institut exhibition, Feminism Ya Mang.

Please see the programming for Nkosi Sikelel below:

We invite you to join us for our opening which will kick off with a praise poem rendition of the national anthem. The artist’s will then walk-and-talk us through why this intervention is important to them at this particular time. The artists have chosen this format with the intention of inviting the audience to not only comment but ask and answers questions in a sort of group discussion style where the conversation is best brought to life by the varying opinions, memories and local experiences of our audience.

The intervention includes a ‘graffiti’ prayer wall which invites audiences to note, illustrate, claim, exclaim, affirm or even reject their personal wishes for the future of South Africa and the continent. All guests are encouraged to translate their thoughts in whatever language or medium they are most comfortable.

The artists will be partnering with a youth center to create a live piece in response to the intervention. A wall will be dedicated to echoing the voices and wishes of the younger generation. This will form part of a permanent part of the installation.

These are the times the gallery is open to the public. Please RSVP to masechaba.moloi@goethe.de by Wednesday 15, 22 and 29 September if you are interested in viewing the exhibition.