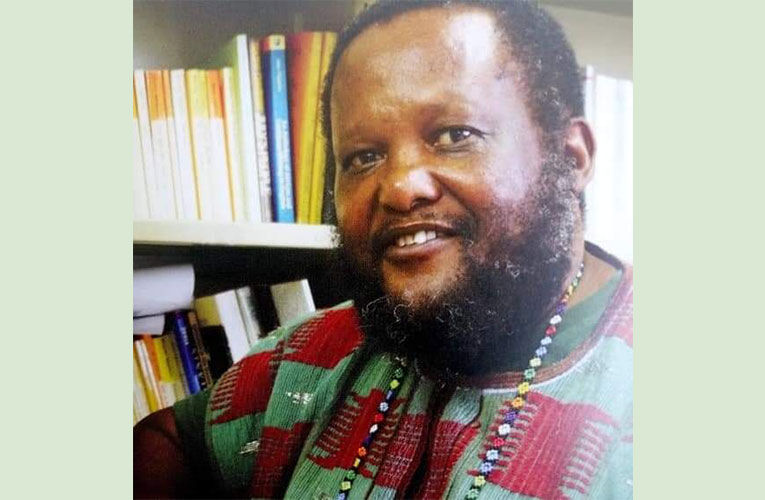 The academic world and the cultural industry in Bhekizizwe Peterson, who passed away on Tuesday, June 15, 2021, have lost a great mind who used his gift of words in a variety of genres and used various media, such as the screen, books, stage and academic spaces and privilege to benefit South Africa, continental Africa and the globe.

Bra Bheki died on Tuesday, but details surrounding his death and the cause are still sketchy, and CITYLIFE/ARTS will update the story as soon as they are announced by family.

But for now the country in general and the arts and academic communities in particular are grieving over the demise of one of the finest artists and formidable scholars of a Pan African orientation this country has ever produced. Peterson, an academic of note who had so much intellectual dexterity, not only contributed to the academy, but he used his gift and knowledge to produce cultural products that had relevance to the African  communities and their lived experiences. An  unapologetically Pan Africanist in intellectual orientation, Peterson’s cultural products that often cut to the bone of issues affecting and afflicting Africans and the continent in the post colony, in the clearest of fashion, will however continue to benefit society long after he is gone. Peterson was especially respected for his Pan African thought that he was able to champion vigorously in the spaces that he occupied, be it in books, film, stage and academia. He was truly an interdisciplinary scholar and academic who operated in all these disciplines with ease and finesse.

Besides his academic research output that today has footprints in international prestigious corridors of learning, such as of Yale University (US) and Birmingham University (U.K), he also closely maintained a solid connection and relationships with different communities outside the academy such as the theatre ,film and TV communities who regarded and claimed him as one of their own. This was an important attribute of Bra Bheki, especially because many of his colleagues in academic circles often struggleto meld their ideas and personalities with those of the communities in their respective area of expertise, and this unfortunately means that they remain detached and almost aloof to the needs of communities whose expertise and research solutions they design are supposed to be of assistance to.

ButBra  Bheki’s kind of intellectual products were not just for the elite in academic and intellectual spaces, but were accessible to communities, for example through films and TV. In other words, despite his privileged position as a professor of African literature at Wits, he was still connected to the greater South African society in general; and the arts community in particular, with whom he collaborated in some of his products.  His artistic output was therefore communal in character and in design and execution. His warm attributes and accessibility greatly assisted in this regard. This community involvement was carried out apart from his teaching responsibilities at Wits. In short he was a people’s professor.

There is therefore no doubt that Peterson was greatly admired by a wider community who fondly simply called him Bra Bheki, a word of endearment only a few in society are called by as the title has to be earned in the social context of South Africa.  The earning of this title is also shrouded in mystery as no one knows when and who in society actually decides so and so is called Bra. The only thing that is known is why suo and so is called Bra.  It is a title that seems to be bestowed on a privileged few in society in an organic, almost spontaneous and haphazard, but still with a degree of deliberate and intentional fashion, making those who earn this title special people. Bra Bheki was one of the few such people honoured by the the arts communities in this manner. Students at Wits also called him Bra Bheki, which in the view of society and students is clearly an elevation beyond and above the title of professor, that he actually was.

But to those who  knew him closely this is perhaps not a surprise at all. Those who knew him  closely speak of a man who simply knew his stuff, and was able to articulate his position and knowledge clearly and without fear or favour, and he was  therefore, admired by both society at large and his colleagues in the academy in equal measure.

“Last night a no the intellectual giant of African Literature and global literature, the arts, film, TV, and media passed on. The most nuanced film maker through his company cheekily named Natives at Large. A Pan Africanist of note. A brother and fellow traveller of critical intellectual thought and practice. The world will never be the same again. If he reads what I have written here as he often said to me at our lunches “What is that about? You people are complicated”. Profoundly saddened. Rest in Power Prof Bhekizizwe Peterson,” reacted University of Pretoria Vice -Chancellor and Principal Professor Tawana Kupe about the death of his colleague and friend who worked together at the University of the Witwatersrand before his occupied his current position at the University of Pretoria. He expressed his  opinion about Peterson on his Linkedin page yesterday.

Peterson was also remarkable in that he was able to traverse several media in his practice such as a filmmaker, dramatist, screen writer, non fiction writer and academic author whose books and academic papers are carried by international libraries.

In his writing however, he positioned himself as a Pan Africanist through and through, and there is no doubt that he was passionate about this subject.

His positioning as an influential academic and cultural producer was both critical and significant, especially during a time when a pan African voice in influential spaces such as the academy and politics seems to be waning as that positioning does not pay bills in a world that is increasingly becoming capitalistic. In fact voices of the likes of Peterson are increasingly becoming conspicuous by their absence in a world in which the hegemonic hold on levers of power lies with those that control the economy, politics and the liberal establishment.

But people like Peterson and a few others still dreamt and are dreaming  of a Pan African possibility and vision in an unhelpful, and perhaps hostile global environment in which to hold a strong view on Pan Africanism is gazed at with suspicion by the establishment. But this did not deter Peterson and a few others in academic spaces, using their privileged positions and a level of academic freedom and tolerance, they enjoyed in those spaces, a privilege often not extended to those outside those spaces, who hold strong views on Pan Africanism, to pursue the ideals of Pan Africanism in the spaces they commanded and occupied.

One of his most acclaimed authorship is the publication of the book Monarchs, Missionaries &African Intellectuals: African Theatre and the unmaking of colonial marginality, whose first editions  were published in 2000 in English and held by 233 WorldCat member libraries worldwide.

This book was widely lauded by especially fellow academics as it displays some of the finest scholarly by an African scholar, and the following is what his colleagues said about this book when it was first published:

“An excellent and important book moving with great ease in very tricky terrain… I must confess that having finished it, I wanted to start reading it again, immediately,” said Professor Liz Gunner, University of Natal, about the book.

“Two case studies constitute the core around which is woven this story of the development of black theatre in South Africa in the early years of the century.” “The argument concerns the intellectual formation of the early African elite in relation to colonial authority and how each affected the other in complicated ways. Much of the work in the field of African Studies still relies on rigid distinctions of ‘tradition’ and ‘modernity’, ‘collaboration’ and ‘resistance’, ‘indigenous’ and ‘foreign’. This book moves well beyond these frameworks to probe the complex entanglements of different intellectual traditions in the South African context.”—the jacket of the book reads.

Peterson was also the co-editor of a new book on Plaatje’s Native Life: Past and Present. published by Wits University Press n 2016, that looked at the life and times of one of the founders of the African National Congress Sol Plaatje.

Peterson has served on various editorial, statutory and artistic committees, juries and boards across the continent. He has held invited Fellowships at Yale University and Birmingham University (U.K). He has published extensively on African Literature, Performance and Cultural Studies as well as Black Intellectual Traditions in South Africa. His books also include Fragments in the Sun, Zulu Love Letter: A Screenplay and Sol Plaatje’s Native Life in South Africa: Past and Present (co-edited with Janet Remmington and Brian Willan).

He is the writer and / or producer of internationally acclaimed films including Fools, Zulu Love Letter and Zwelidumile (all directed by Ramadan Suleman) and Born into Struggle, The Battle for Johannesburg and Miners Shot Down (all directed by Rehad Desai).

His work touched a number of people both in the community and in academia as the following social media post by well known feminist activist, visual artist and academic  Sharlene Khan, published on her facebook timeline yesterday attests:

“Today I woke up to the devastating news of Prof Bhekizizwe Peterson’s death. I loved him. For very long he was someone I admired from afar, someone I heard of mentioned in terms of the work at the African Cultural Centre, a practitioner and a towering intellectual in the truest sense in a Department that I had no access to. So many brilliant friends did and they spoke of him with warmth, love and admiration. And so I plotted and waited to find a way to get to know Prof. It took me over a decade but I came up with a Decolonial AestheSis Creative Lab and his was the first name on the guest wish list of facilitators. He accepted. For a week, he was there in Makhanda with us even though he was still recovering from illness and he didn’t know me. Or so I thought. I enjoyed every moment picking his brain. He played games, washed dishes and laughed. One day he said to Fouad and I as we were driving him back to his accommodation, “Sharlene, where is this terror that I’ve heard about? All I experienced this week is a caring, lovely, kind, smart person.” We had a good laugh and discussion about the way strong women are represented. Since then we have kept in contact, had lunch, he has called on the phone, never too busy to let you pick his brain. He is the old school intellectual who hears, who speaks and acts with integrity, never afraid to disagree in love, and is passionate, calls out wrong but is never without hope. His body of scholarship is testimony to that marvelous brain of his, but his students are the real testimony to the breath of his scholarship. Thanks Prof for letting me get to know you and loving you too,” Khan reflected on her close relationship with the late Bra Bheki.

Bra Bheki, may your soul rest in peace.