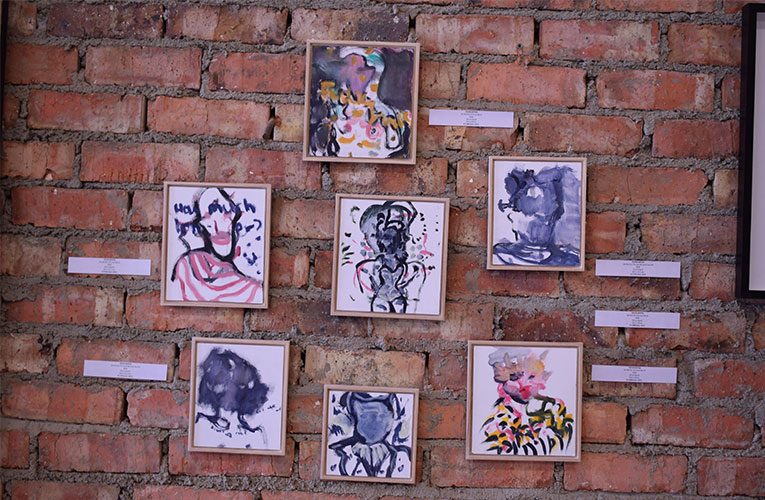 The names of artists accompanying the artworks on the gallery walls are all significant voices on the country’s contemporary art scene. All the 10 artists whose work form part of this exhibition have been recognized for their talent and creative imagination.

Going though this body of work is akin to a tour of South African contemporary art landscape in the past 10 years, and the range of issues tackled by this exhibition is as diverse as the artists’ styles.

I found myself sending more time that I initially planned to spend in the gallery on Saturday as I had to take in the different narratives by this group of award winning visual artists.

The years 2021 marks a year of momentous milestones for the Bag Factory. In addition to celebrating the organisation’s 30th anniversary, the Bag Factory is commemorating 10 years of the Cassirer Welz Award, presented annually in partnership with long-term sponsor Strauss &Co.

The award was founded in 2011 by the late Nobel Laureate, Nadine Gordimer in celebration of her husband Reinhold Cassirer’s love of the arts. It has grown into a prestigious visual art award known for locating and acknowledging excellence in emerging local artists.

After Gordimer’s passing in 2014, Strauss &Co. pledged its continued support to the award — a partnership that has continued to this day.

After the passing of Stephan Welz the following year, the Reinhold Cassirer Award was renamed the Cassirer Welz Award as a fitting tribute to the two men who contributed so much to the South African art world.

Each year, one emerging South African artist under the age of 35, in the field of drawing or painting, is awarded the opportunity to spend 10 weeks in residence at the Bag Factory’s studios, culminating in the artist’s first solo exhibition of new work. Through the exchange of ideas, mentorship and skills development, the artist has an opportunity for substantial creative and professional growth.

The exhibition takes places at the Bag Factory’s pop-up space at the new Oxford Parks precinct in Dunkeld, opening on 24 July 2021 – 12 September 2021. The address: is 199 Oxford Street, Dunkeld, Johannesburg.

And these artists in the first instance deserved this honour, judging by how they have since developed from the time they were honoured.

For example BNgobeni today is one of the top selling contemporary artists of his generation, and has clearly emerged as an important voice of the contemporary art scene.

He has enjoyed other honours in the visual art space, including receiving international residencies and receiving the prestigious Standard Bank Young Artist Award for 2020. He is also giving back to a sector that has rewarded him handsomely through the Blessing Ngobeni Art Prize that is awarded to a young artists annually.

DuduBloom More is also going places, as she is signed to Berman Contemporary Gallery, and this year, she is participating in the London art fair 1:54.

Ndimande is also making waves as he works full-time at Strauss&Co. as a catalog writer, as well as having a permanent studio at the Bag Factory where he practices his art.

Kupa is also a favourite with collectors and occupies a comfortable space in the contemporary art scene in South Africa and he often regularly exhibits  his body of work with Guns & Rain, a contemporary gallery that focuses in showcasing the work of artists from the southern Africa region.

Mokoenais also making significant art history. Known for stretching her imagination in her art practice, Mokoena in July this years was declared Artist of the Month by the Southern African Foundation For Contemporary Art (SAFFCA), and that came with the opportunity for her work to be introduced to international collectors. Last year she had two shows, one at Gallery Fanon in Maboneng, and another one in the US, which sold out. Mokoena is definitely a new talent to look out for on the South African contemporary art scene.

Botha’s career is also on the rise as currently she has a solo show entitled Caught at David Krut Projects gallery in Parkwood, and on Saturday, August 21, she flew out of the country to take a 12 months international residency in Germany.

And so this retrospective exhibition represents some of the bext visual art brains in the country working in different media and dealing with diverse contemporary issues that are part of our features today. This exhibition is worth visiting.

This retrospective exhibition is at 199 Oxford Parks precinct in Dunkeld, opening on 24 July 2021 running 12 September 2021.