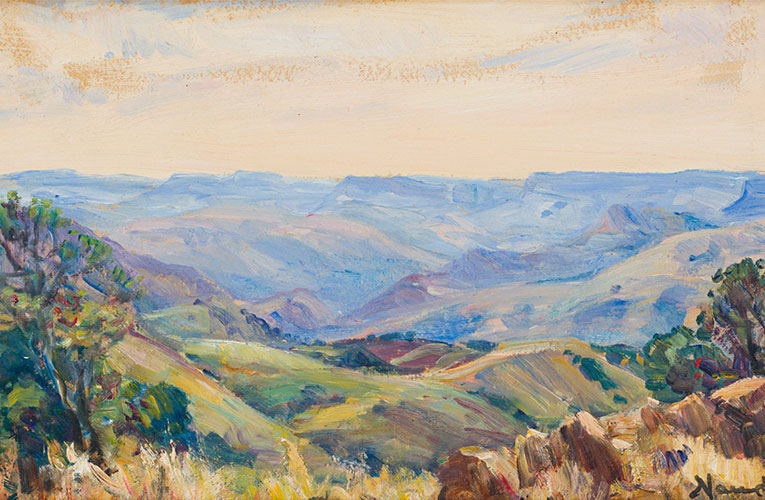 I considered myself the lucky one this week when I was invited to  go and view Strauss &Co.’s  forthcoming Impression/Expression, a  live virtual auction sale at their Johannesburg ahead of the  actual sale on September 14, 2021.

But when I arrived at their Houghton Johannesburg premises, the place was a hive of activity as I found a number of art collectors being briefed by Senior Art Specialist  Wilhelm Van  Rensburg and Head of Fine Art Department Dr. Alastair Meredith. The guests comprised of those that had booked an appointment to view this important body of work that spans three generations of South African fine artists, some of the greatest to have emerged out of South Africa over the years.

Going by the interest shown by the group of collectors I saw there, there is no doubt that Impression/Expression is an important fine art sale on the fine art calendar in South Africa this year.

I found myself in awe of the art work that will go under the hammer come September 14 as I went through the collection in the gallery.

Van Rensburg in between back to back meetings with the collectors I found there, briefly took me through some of the works in its gallery, that form this impressive collection of art works spanning decades from early 19th century , the 20th century to  contemporary  works.

“These works by several generations of South African artists are important in that they were influenced by the European art movements of Expression and Impression. These are artists who lived and worked in Europe during those art movements. But when they came back to South Africa, they created their own styles that were influenced by these art movements but are distinctively South African styles informed by the local landscapes and reality,” Van Rensburg explained the curatorial input that went into putting together Impression/Expression sale.

In essence Impression/Expression represents a multi-general mix of artists, from Hugo Naudé to Georgina Gratrix, due to be held on Tuesday, 14 September 2021 at 6pm. The 90-lot sale, which will be livestreamed from Johannesburg, broadly explores the legacies of impressionism and expressionism, two important western art movements, in South African art.

The single-session auction will include a tailored selection of art lots, including two lots apiece by auction trailblazers JH Pierneef and Irma Stern, as well as five icon wines, among them an 1821 vintage of Grand Constance, South Africa’s oldest and most illustrious wine brand. The sale is expected to earn up to R14 million and includes Stern’s Bathers at Nice, a 1965 oil portraying three naked bathers on the French Riviera (estimate R1.5 – 2 million).

The time period under consideration is bracketed by Hugo Naudé’s uplifting spring composition, Namaqualand Flowers and Quiver Tree (estimate R700 000 – 1 000 000) and Georgina Gratrix’s bountiful still life from 2021, All that Glitters (R70 000 – 90 000). All the proceeds of the sale of the Gratrix lot will benefit the KZNSA Gallery, Durban. Naudé aside, other notable Cape impressionists in this sale include Gwelo Goodman and Pieter Wenning, whose Rietdakhuis, Mowbray, Cape (estimate R400 000 – 600 000) distils the late-career élan experienced by the artist before his premature death.

“The sale, which is exclusively composed of works by South African artists, helps make sense of some of the many stylistic and conceptual shifts that have taken place in this country over the past century,” says Alastair Meredith, who heads up Strauss & Co’s art department. “Many of the works in Impression/Expression, whether painted or sculpted, mid-century or contemporary, can sit comfortably in the impressionism or expressionism categories. Works from each school, however, can still be tied together by theme, tone, impulse or style. Impressionist pictures, for instance, can capture the transience of light, can be stirred by modernity, and in pursuit of atmospheric sensation. Many expressionist works, moreover, are made with instinct, are defined by intimacy, and drawn to visual anarchy. The works in Impression/Expression are presented with these often overlapping attributes in mind.”

The sale also includes an exciting crop of contemporary women artists, among them Maaike Bakker, Io Makandal, Yolanda Mazwana, Lucy Jane Turpin and Kylie Wentzel. Their diverse practices are contextualized by the inclusion of works by prominent earlier artists such as Leonora Everard-Haden, Maggie Laubser, Judith Mason, Mmakgabo Helen Sebidi, Nita Spilhaus and Hannatjie van der Wat. Similar to previous bespoke auctions organised by the Johannesburg office of Strauss & Co, such as the phenomenally successful single-artist sale devoted to JH Pierneef in July, this sale is supported by an extensive e-catalogue.

As a complement to this historically minded sale of art, Strauss & Co’s wine department has arranged a unique selection of five iconic South African wines of considerable age. Unlike the deep wine heritage of Europe, few bottles of very old South African wine remain today. The marquee lot, and arguably the rarest South African wine, is the 1821 Grand Constance (estimate R300 000 – 500 000), of which only a dozen bottles still exist.

Since these wines have been stored over multiple generations, provenance is of supreme importance and each bottle carries a story of winemaking and ownership. The 1821 Grand Constance, for instance, was purchased on auction in London as part of a large collection in 1983 by the Malan family of Simonsig Estate, while the bottle of 1800 Muscat d’Alexandrie was drawn from a barrel of 1800 Muscat that has been under the Jaubert family’s custodianship ever since. Importantly, recent tastings have confirmed the vinosity and sheer brilliance of the wines being offered.

Commenting on the distinctive arrangement of this single-session sale, Susie Goodman, an executive director at Strauss & Co, states: “The time of Covid has seen a complete transformation in how we do business, especially digitally, and has enabled us to reach people in different parts of the world that we never previously accessed. Over the past year we’ve noticed how these buyers have reinvigorated areas that were previously flat or dormant, for example the market for early Cape impressionism. This category has seen a huge upswing in the past year. Our solid digital infrastructure, which predates Covid, enabled us to quickly respond to these new patterns, as well as service clients wanting to buy or sell on a quicker turnaround than was traditionally the norm. Our capacity to present a focused sale like this owes a great deal to the phenomenal team of experts and cataloguers at Strauss & Co.”

Impression/Expression: from Hugo Naudé to Georgina Gratrix, and the mini-sale of five South African wine icons, will be held on Tuesday, 14 September 2021 at 6pm. Susie Goodman and  Meredith will share duties at the rostrum over the course of the evening sale.

An e-catalogue containing short essays and descriptive notes is available on Strauss & Co’s website www@straussart.co.za. Works available in this sale is available on view at Strauss & Co’s Johannesburg exhibition space at 89 Central St, Houghton, from Monday, 6 September 2021 until the day of the sale. Booking is encouraged due to the Covid-protocols in place.

When it was time to leave, I felt like I still needed more time just to absorb more of this impressive body of fine art that will end up in the hands of collectors come September 14, 2021, starting at 6pm.