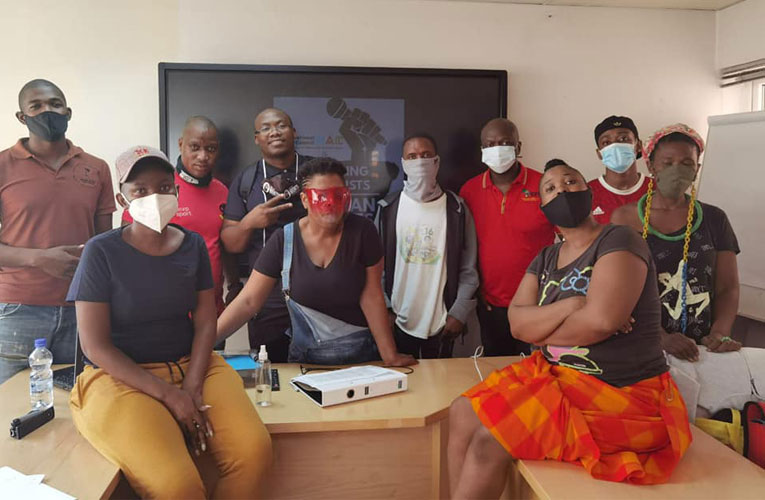 Soprano Sibongile Mngoma revealed this in an exclusive interview with CITYLIFE/ARTS Arts as I spent a night with the enraged artists this week.

I found a group of artists in a serious conversation relating to the experiences in the provinces and the difficulties they experience when hired especially by government entities to put up performances. That was of course before the global pandemic struck in March 2020, disrupting their plans to make a living as shows got cancelled and hard lockdown was implemented.

Some complained that when hired to perform at government events they are told which other artists they must work with whether they prefer working with such artists or not.

I am at the National Arts Council offices on day 16, Wednesday, March 17, 2021, of the sit in by enraged artists who have occupied these offices of the government arts agency responsible for funding arts projects. I am joining the artists that have occupied boardrooms in which they also sleep for the night. There are no officials in sight with the exception of three security guards. The official have since stopped coming to the offices since the occupation commenced reportedly concerned for their safety. But the artists I found here wnd with whom I I spent the night, sleeping in the board room are anything but threatening. In fact, they are well disciplined as I got to observe during the night, including taking turns in cleaning up the boardroom they have occupied and other office spaces.

Their leader Sibongile Mngoma seems to be firmly in charge of the group that has been camping here for more than two weeks now.  In fact as the night progresses the artists while up their time by putting together some stunning performances, dancing, singing and drumming to kill off time and monotony of camping here and it is unclear when this will come to an end as Zoom meeting with NAC Council members and officials from the Department of Sports, Arts and Culture has so far failed to break the stand-off. In fact the last meeting the artists held with NAC and DSAC officials last Sunday in seemed to widen the gap between the demands of the artists and Government.

This time the artists have taken this unprecedented move in protest against the manner in which the NAC is handling the disbursement of the Presidential Economic Stimulus Package (PESP), meant to  engineer the economic comeback of the cultural and creative industry that has been left badly battered by the pandemic and the various lockdowns since 2020  as authorities banned gatherings to control the spread of the contagious virus.

The NAC is accused by artists of various inefficiencies with regards to the PESP funds, including the slow pace of paying artists for the various projects for which they sought funding from NAC. The agency is also accused of allowing some members of the council to award themselves and their projects money meant to be disbursed to artists.  The artists complain that some applicants got funded for various projects while others get as little at R10 000.

As the gulf between the artists and NAC widened further, the artists are in fact demanding that the entire NAC Council that was appointed in January resign as they feel that they have been discredited and they can no longer trust them.

“In fact the whole lot of them must be disbanded as we no longer can trust them. They are not different from gangsters. It is as simple as that, as now we have to start from scratch building the NAC we can trust and not this whole lot and the officials. We are going nowhere until a number of demands are met. Support from provinces has been growing since we started camping here. As creatives our unity is tight, and artists have never been so united before like this,” Mngoma told me  an interview.

Spending an night with these artists has given me an insight into the suffering among the ranks of the artists, with some said to be fast losing their properties as they cannot keep up with payments, and some being kicked out of their rented properties by landlords for not paying rent.

“The situation has been so bad to an extent that even If tomorrow government says now artists can perform, a number of artists would not be able to perform as some have resorted to selling their instruments, essentials tools of their trade in order to eat.

“At a personal level I have experienced difficulties as I cannot see my four year old daughter. Sometimes I fear even to call her as she does not understand why I am not at home. I have also risked losing my contract with the University of Free State because I have been here for the past two weeks.  However this is a sacrifice all of us involved had to make in order to get artists assisted, and so there is no regret at all for having taken the decision that we have to come here and camp. In fact we are going nowhere until action is taken by authorities with regards to our key demands.  Sibongile Mngoma is going nowhere. I and the rest of the group have made our selves comfortable hear and sort out this mess at NAC.. Yes, it is not easy as we miss our families and we have to share space with strangers. But all that is the sacrifice we are prepared to pay until authorities hear us,” Mngoma pointed out.

However while talking to her our conversations was interrupted by a call that came through from DSAC acting Director General Vusi Ndima who informed Mngoma that Minister of Arts and Culture Nathi Mthethwa is requesting a meeting with  Mngoma and fellow leaders in the two  arts organizations I’m4the Arts and South African United Cultural and Creative  Industry Federation both of which are led by Mngoma as President.

“Yes, I can confirm that the Minister has requested a meeting with us on Friday at 5pm,” Mngoma told me without giving further details about the agenda of the meeting with the minister who last week cancelled at the last minute, a Zoom Meeting with the enraged artists. Instead he sent Ndima, Charles Mabaso Chief Director of Cultural Industries and Dumisani Tshabalala, a senior official at DSAC. However that meeting failed to produced results, but a stalemate.

It is however hoped that this meeting with the minister, the first to be held between Mthethwa and the artists since the debacle started, will hopefully see some sort of movement towards resolving the stalemate.

Besides the sit in, the artists have also been putting up protest performances outside the offices of NAC in Newtown between 1pm and 6pm since last week.