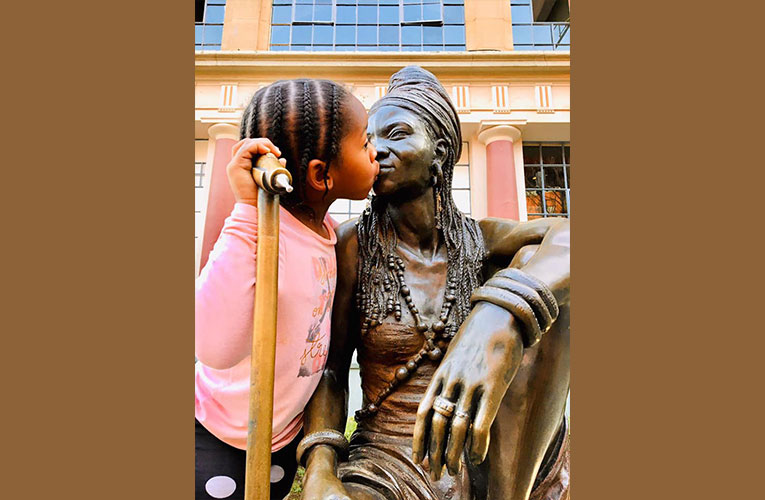 This picture says it all, a child kissing the late South African sensational pop star and songbird Brenda Fassie’s sculpture that stands proudly outside the Market Theatre in Newtown.

The occasion was a memorial event for fallen artists in general and those who passed on between 2020 and now in 2021, during these uncertain Covid-19 times. Organised by Abahlali Movement Drive, a group of artists who occupied the National Arts Council (NAC) for 60 days this year, unhappy with how the Presidential Economic Stimulus Package (PESP) fund meant for struggling artists was handled by the NAC. Known as Abahlali Base NAC when they were still inside the NAC building in Newtown, but who have since formalised themselves as an activation Non Profit Organisation with a new name Abahlali Movement Drive once outside the building, the artists organised this memorial service  yesterday as a collective grief for the fallen artists. Some of the artists have died of Covid-19-related complications, while others from other ailments. But all were remembered nevertheless, in an almost solemn event attended by a limited number of artists due to Covid-19 restrictions. But the event was livestreamed for the benefit of those at home.

The occasion itself that saw a group of  artists that formed an ensemble for the occasion, go on stage in the John Kani theatre, wearing costumes of different colours, mainly white costumes and the black T-Shirts designed by Abahlali, the ensemble led by soprano Sibongile Mngoma, carrying crosses, induced a sense of a funeral on stage. Poetry was recited, sorrowful songs were sung, dances of commemoration were arranged and beautifully and almost solemnly performed, incense was burned, creating a spiritual environment that reminded everyone in the theatre of the loss of so many artists within a period less than two years.

The atmosphere was almost surreal. In addition to the main stage show of mourning, there On each side of the stage while performances were in progress, there was another show of a certain kind, visual artists Slovo drawing a portrait on one side, and Fortune painting an art piece on the other. The performances, both visual creation in progress, the dancing, the singing, the poetry rendition and the burning of incense, just melded into creating  one big show on the sgtage of the John kani Theatre on a Thursday afternoon.

The resultant atmosphere in the theatre somehow drove everyone to stop and think for a moment, not about their own problems, but about those that have passed on. It was indeed a necessary memorial service by colleagues feeling the pain of the loss of so much  life.

Poet Lebo Mashile was also one of the artists that performed her usual touching poetry. It almost felt like we were back at the Market Theatre during normal times to watch a theatrical production about a certain community of artists in a certain fictitious country that had lost so many people through a mysterious  pandemic sweeping through the community, except that this was real, not fiction.

After the performances inside the theatre, it was then that the artists went outside, to lay fresh flowers at the sculpture of the late Fassie, dancing and also singing. It almost felt like one was at a festival, except that this was not a performance meant to make people happy. It was a commemoration of a massive loss and therefore, it was a dance of sadness. The commemorating artists though were sending a clear message, and that is that they would  forget those that have passed on.