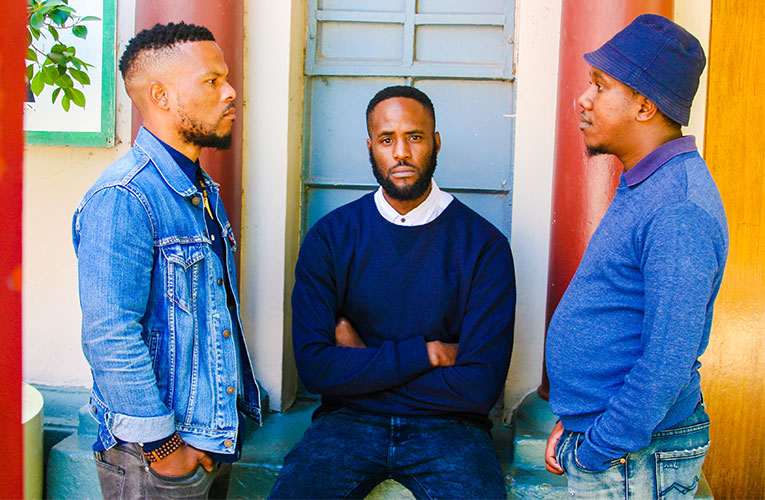 Two men are on stage, and they seem to hold different views on  where a country in Africa post colonialism is or supposed to be. And these two men, as their heated conversation reveals, used to fight side by side for a common enemy during the struggle.  They were pan Africanist in their political orientation and that common political ideology seemed to be the glue that formed the basis of their relationship as they waged the war against colonialists of yesteryear.

But since that feat was achieved these two men’s views on the post colony are no the same. In fact they seem to differ fundamentally  on a number of issues, both politically and personally. But they remain friends who in this post colonial environment have taken their views to another level, and this time it is an intellectual frame that defines their continued engagement and robust debate on the post colonial stat, its shape and form.

These two men are characters of a new play, which is witnessed  being rehearsed at Joburg Theatre, in one of the small rehearsal spaces.

The past 27 years since democracy have come to be seen by different people as having significantly different meanings. For example there are those who see a post liberation South Africa as having delivered the freedom that people fought. And yet there are those who will argue that there are so many social contradictions that render the idea of freedom having arrived as an incorrect assertion.

Welcome to this new play, Sefako le Sefako , directed by Thabiso T Rammala, who also has roped in the skills of Mojnareng Vice Motshabi  and Themba Mkhoma who sit in during its rehearsals to assist in shaping this play into a product that audiences could easily connect with, and which will be be performed at the Joburg Theatre on the 25th of May 2021 andthe 26th of May 2021 at 6pm.The shorter version of the work was stage-read several years ago at the same venue.

Sefako le Sefako deals with the theme of a test of true friendship under considerable social strains. The protagonist wants to get married but his friend disaproves. The tension in the relationship makes the stuff of drama.

.Synopsis of the play

Sefako Nyakallo, a middle-aged radical African man, has separated from his estranged wife and prepares to get married to a white intellectual woman to the dismay of his friend and comrade Sefako Ditsie who argues for African self-pride. Nyakallo vows to do anything, including blackmail to get his trophy.

The play is a recipient of the Presidential Employment Stimulus Package (PESP) Grant administered by the National Arts Council (NAC) on behalf of the Department of Sport, Arts and Culture (DSAC). Entrance to the show is R30 and patrons can make bookings via the theatre’s website.

“But essentially this play is about two personal friends who are arguing at an intellectual academic level about the idea of freedom as having arrived. It tests a solid friendship whose boind was solid among these two friends as they waged the war for liberation, and yet find themselves at logger heads as to whether that freedom is here or not. In away this play is based on an idea of an alter ego, who looks at the mirror mirrors and sees another person, and yet that person in the mirror is him,”  explains Lehlohonolo Shale, the writer of the play, in an interview with CITYLIFE/ARTS.

Shale himself has an interesting career trajectory. Until 2017, he was a lone Council representing the PAC iin the City of Johannesburg.

And when he was out of politics when his party lost its solo city in the council in 2016, he had recalibrate his deferred artistic career by going back to pursuing drama writing.

“In 2017 I enrolled at the inaugural playwriting short course facilitated by playwright OmphileMolusi (Cadre, Itsoseng, Ankobia) at the Market Theatre Laboratory. One of the outcomes was a penning of a 10-minute play staged upon graduation. The work Sefako le Sefako, a two-hander, was stage-read at the Joburg Theatre during the same year.

My interest in theatre started in the late 80’s when I was still at high school at Progress Comprehensive at zone 4, Pimville. I entered an audition for a part in the Bugsy Malonemusical and got it. The play was performed at the then Intimate Theatre in Braamfontein.I also made inroads into dubbing (voice-overs) at the Dubcor Studios. These programmes were mainly produced for the SABC.I also made a brief appearance in the film Mapantsula.

I hold a Bachelor of Arts (BA) from Vista University at the Soweto Campus (now UJ) and a BA (Hons) degree in Comparative Literature from Wits University. The play Sefako le Sefako is my debut professional play as a writer. Before then I have been working in Community Theatre as Actor, Writer and Director.The group that I was part of was calledTswelopele Youth Club, based at Klipspruit. Itparticipated in many theatre festivals in Johannesburg.

Outside of theatre I have worked in the labour movement, local government and the provincial legislature. I am also a freelance journalist and have contributed articles to Bantu World,” explains Shale.

And his work in  theatre is already getting noticed as yesterday he was invited to be a guest at Wits University discussing black theatre making with drama students.

“This is a two hander. But when watching it, the audience will also see a third invisible character, who is a white women in love with one of the characters. She is invisible but present. Intially Shale had included that character, but as I read the strict I advised that we remove the character and yet she is still very much there though not visible. In any case white presence is always prsenet even in their absence,” quips Rammala as he explained why  the white character does not have to be on stage as already  her presence  can be felt.

Sefako le Sefako, which is mainly in seSotho and a sprinkling of English at at Sape.com, Joburg Theatre in Braafontein on May 25 and May 26, 2021 at 6pm, and tickets cost R30 each.