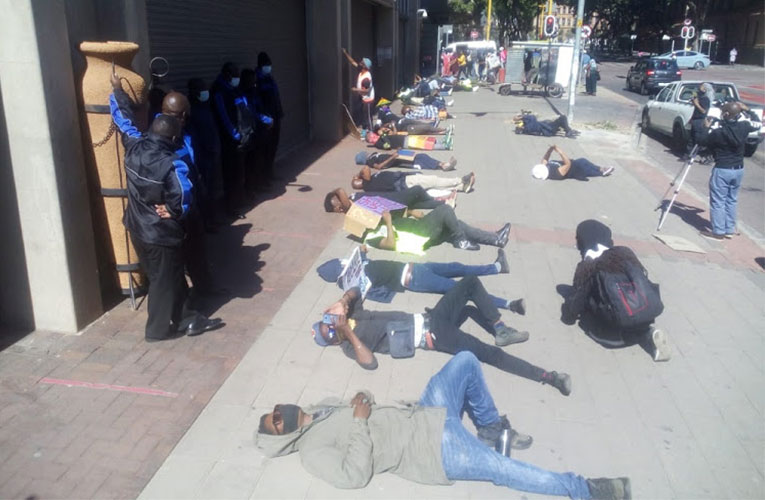 The protest ended at 5pm officially, but  an extended live broadcast  with on the minute commentary by Sibongile Mngoma showing allegedly “luxury car”s driving out of the DSAC building  made for good TV viewing to make Netflix jealous

A standoff took place yesterday at the Department of Sports, Arts and Culture in Pretoria when a ring of steel was put around the department by a strong contingent of police and security guards preventing a group protesting artists from gaining entrance.

However the artists calling themselves Abahlali lead by soprano Sibongile Mngoma sang loudly outside the building demanding that the entire department be collapsed as they said they were useless and cowards.

Coming in a hired bus, arriving at DSAC offices at 11.30am, an ugly situation almost developed when the artists confronted a security guard who they accused of being arrogant in the manner he addressed them before Mngoma intervened and ordered the artists to back off to their original positions as planned.

After quelling what appeared to be a situation that was almost getting pout of hand, Mngoma emphasised to the artists that it was important that the protesting artists remained disciplined for their mission of their visit to the DSAAC to succeed  as well as avoiding violence.

“It is important that you move back to your original positions and remain disciplined, as if you do not ,you will die. The reason why Abahlali was successful (in the 60 days spent at the NAC building) was because they remained disciplined,” Mngoma told the artists, who were seen retreating to their positions.

Then the artists activiated their campaign by singing mainly liberation spngs in a defiant posture. Some of the artists lay in front of the building housing DSAC,  ienacting a scenario of homeless artists that have been left destitute due to the inability  to work and earn a living due to the current regulations pertaining to containing the spread of the infection of the Copvid-19 pandemic.

The artistsfor most of the day until 5pm,  continued to defiantly posture sing struggle songs calling out the names of  Minister Of Sports, Arts and Culture Nathi Mthethwa and its top officials, Director General Vusimuzi Mkhize, Deputy Director General Vusi Ndima and Chief Director Charles Mabaso.

The artists are protesting against the DSAC’s handling of their grievances pertaining to how DSAC itself agencies are handling the Covid-19 relief packages aimed at assisting artists and alleviate their vulnerable position due to limited opportunities to work and earn a living in the current climate of Covid-19 and the  lockdowns.

At yesterday’s protest the presence of so many police and vehicles, however seemed to infuriate the participating artists and those at home, who took to social media platforms to condemn the decision to place Police and security guards, instead of engaging with them over their grievances.

The group of artists however, with the exception of that one instance as they arrived, seemed to been well behaved, from example marshals enforced social distancing even as they danced, drummed, sang and put up unscripted theatrical pieces outside the building. In fact they did everything that the artists do best to drum home their message, which is essentially that they were not happy with things at DSAC.

It was however unclear whether the minister and his top officials were in the building during the entire drama outside the DSAC building yesterday. The show outside however went on. Top officials of DSAC were no there to meet the artists or hear what had brought them to the offices.

In fact they appeared to have been locked in their offices the entire day as the artists waited for them outside with the police mainly letting the artists do their thing but keeping a close eye on the artists’ activities.

Fellow artists who were not part of the protesting group gave the artists a thumps up on social media.

“Those police vehicles… What for?” asked Annette du Plessis on Facebook about the presence of police at a protest  that artists believed was orderly and peaceful as they demanded an audience with the minister. ·

· “They are not as strong as you  Sibongile Mngoma. You are my hero.,” said Curtis Williams.

“Artists have families too man…Why can’t we be treated like everyone else nyani ke…. . Amandla asoze aphela. Strength to everyone fighting the good fight ,” commented Vuyo Madvhi on the live facebook Im4theArts page which broadcast the entire proceedings live from outide DSAC offices.

In the meantime, the protesting artists were engaged with viewers of their action on social media as they broadcast live every action and every word uttered by their leader Mngoma, directed at DSAC, including expletives.

Pansi no Vusi Ndima. Pansi no Charles Mabaso. Pansi with all the workers at this building,” the artists sang.

“They tell us they have been deployed by the party, but which party deployed you to steal money. The dogs must leave. Are you afraid of them. I will help them to find their balls If they are in the streets I will find them for them to be able to lead..These dogs are cowards. You are cowards, afraid of women.

It was however not clear by last night when the artists will go and protest again at the DSAC offices,  But Mngoma made it clear that the next time they will have to meet with them.

At 5pm the artists, with the ecxpetion of Mngoma and a few of her  leadership team, retreated as per their protest permits.

But Mngoma remained at the area of protest, and this time pointing her camera to the exit  parking lotto  shutter gate that was closed and only periodically opening to let cars  leave only to close again for the3 next car  presumably of the top officials to leave.

The footage that was broadcast live with live commentary by Mngoma  about what she said was a display of luxury living  and lifestyles enjoyed by DSAC officials while “artists  kill themselves due to depression, are losing cars and houses, turned out to be a PR coup for the Abahlali artists . It fed into the popular narrative wrong or right, of a well paid and allegedly corrupt government bureaucracy enjoying  enormous luxury amid suffering of the people they are supposed to serve.

The fact that top of the range cars presumably belonging to officials were seen leaving the premises periodically,  two hours after the main group of Abahlali had retreated into their bus, made for good television viewing.

CITYLIFE/ARTS asked for a comment from the minister’s spokesperson Masechaba Khumalo, but at the time of publication she had not yet replied to our email with a list of questions for DSAC in connection with the protest.