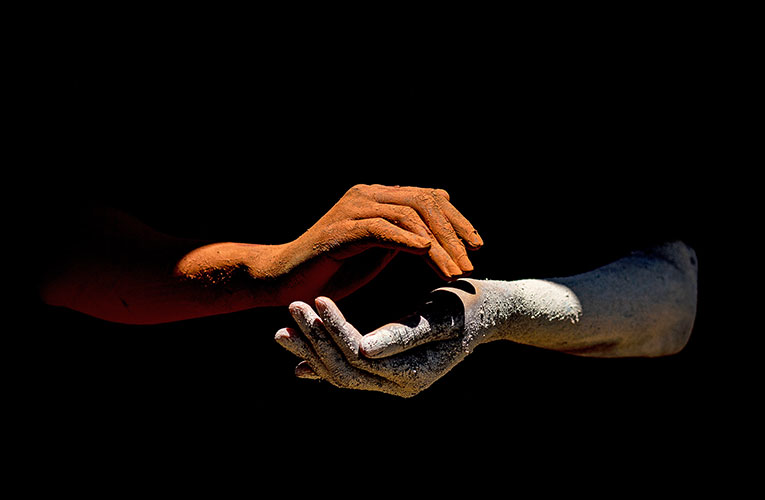 Former Member of Parliament who occupied the powerful position in the arts in the National Legislature of Chairperson of the Portfolio Committee of Arts and Culture, Mongane Wally Serote, in 2015 had a play called The Way We Heal.

The play was crafted and  taken from one of his writings and adapted for stage by playwright Bogosi Bolokwe. The Way We Heal had a season at Soweto Theatre before travelling to Edinburgh Festival in the UK, where it was critically acclaimed.

The play focused on the work of traditional healers in society in general and particularly black healers. The play raised some eyebrows in society, not only because of its content that attempted to shed light on the often sacred and secretive ways  of how healers do their work, but also because the man behind the text that formed the plot of the play, Serote is a high profile person in society. Serote  is a former  freedom fighter, a decorated poet and an academic who spent many years in the Western World’s capitals during the exile years as a well respected member of the ANC. But he is also a critically acclaimed writer haling from Alexandra township, who is as comfortable in poetry as he is in penning novels and short stories.

But here he was in a free, democratic South Africa, and he was declaring his loyalty to that rare breed of gifted people that have a rare gift of healing those afflicted by the vagaries of life in society, often associated with the spiritual world, but sometimes the physical realm, as a healer.

I was reminded of this play on Saturday, May 8, 2021, as I headed to Windybrow Theatre in Hillbrow. Yes, it is in Hillborw and it is still possible to go there and watch shows, for those who may think that it impossible these days, especially  with the place’s reputation of being crime ridden.

This space, managed by the Market Theatre Foundation, since its previous operators failed dismally amidst accusations of maladministration and financial improprieties involving its top management, which has since been fired, a few years ago, has since positioned itself as a Pan African Centre of the Arts.

It is in this context that Windybrow Centre of the Arts, as it is now called, on Saturday, launched its Africa Month programme,  that kicked off with an exhibition, Ihiya. It is in fact Ihiya that reminded me of Serote’s play, The Way We Heal. Both Serote’s play and this exhibition deal with a common theme of the often  overlooked role of African spirituality, especially among the urban black elite and their children.

Featuring the works of young photographers, the majority of whom, and not all graduated from the Market Photo Workshop in Newtown  in 2020, working on a photographic project that focused on two of the most important traditional institutions in urban South Africa in general, and Johannesburg in particular, as far as the spiritual world of a big number of black people are concerned, the Mai Mai, Muti Market in Jeppestown, and the Faraday Market, South of inner city Johannesburg. These two places are a magnet to a black urban class who flock there especially on weekends  for a soulful traditional meal or to scour for a particular muti to deal with a specific ailment that does not seem to want to leave them irrespective of several visits to a Western World trained medical doctor, so they claim.

These two iconic and resilient spaces in urban South Africa, best represent the irony of the contradiction of an urbanising black middle class.  Beyond  the façade of living an urban black existence governed by Western  civilisation and modern norms, this class in fact lives in two, often contradictory worlds, one that firmly believes in the authenticity of the black spiritual realm, in fact dating back to several generations of the black folks’ belief system. This beief system is  centre d on the belief in ancestors that still intervene in black people’s daily experiences of misfortune, fortune and any other thing that happens beyond one’s control .

Not even Western education and the cosmopolitan nature of urban living and socialisation  has diluted, let alone, shaken that belief among the black urban classes, and hence the continual existence of such places as Mai Mai and Faraday. These two urban spaces’ mainstay is really to attend to the spiritual needs of an urban black middle class, who still firmly believe in the spiritual traditional African realm.

It is a class that has come to accept an apparently untenable reality of a dual existence, as far as their belief system is concerned. On one hand, they have accepted Christianity in their daily, lives, a reality  which seems to be contradictory  to some of their core belief systems passed from generation to generation sometimes. This is because this class  have at the same time  accepted the reality that they simply cannot let go of their African traditional belief systems, that essentially informs the core of who they are, and that includes a belief in their ancestors and healing themselves of some of the afflictions they meet daily through consulting an inyanga or a sangoma, for example. The places they often go to are Mai Mai and Faraday  market in Johannesburg, mostly during weekends as these places are teeming with people.

It is these contradictions, and the unusual duality of the urban middle class South African’s existence that this group of photographers explored through their documentation of Mai Mai Mai and Faraday markets during 2020.

Most of the muti people peddlers found at these markets, comprising mainly of sangomas, inyangas and purely muti entrepreneurs trading all kinds of muti at these markets, almost all of them originate from the rural areas of South Africa, mainly KwaZulu-Natal, but also from other parts of Southern Africa.

They are at these markets to meet a demand for their spiritual and physical remedies by a growing black middle class that simply will not let go of their traditions, including their core belief in the role of a traditional healer in their lives.

Yes, some of them will consult  their trusted Inyanga under the cover of darkness, and on Sunday, they will religiously go to Church to fulfill another aspect of their spiritual needs.  Such  has become a regular part of an urban black middle class South African, and hence the need for such spaces as Mai Mai and Faraday markets.

These markets  have a role to play in urban contemporary South Africa.

The participating photographers have managed to capture these contradictions and duality of life that an urban black South African middle class finds itself in.

The photographers that are participating at the exhibition captured interesting aspects of these two spaces, ranging from the muti that is being sold, personalities that are found in these markets and some rituals that happen at the periphery of these markets, such as religious bapotism sessions in surrounding rivers and rivulets of the urban jungle.

I hiya is a visual representation of a sacred and secretive reality of life in the urban belly that often struggles to exist as an equal to the accepted and commonly embraced urban existence, represented by Mai Mai and Faraday markets in Johannesburg.

But gaining access to these healers and muti traders was not a walk on the park, according to Nonkululeko Dube and Cebile Ntuli, who together with exhibition co-curator Buyaphi Mdledle and healer Gog’MaNtuli were part of a panel to discuss the exhibition on Saturday at Windybrow.

Mdledle and his co-curator Rolihlanhla Mahlangu are trainers at the Market Photo Worskshop, and Gog’MaNtuli is from in KwaZulu-Natala, but does her periodic rounds at the two markets in Johannesburg.

“Getting access to these markets was not easy. We had to do some serious negotiations for us to be permitted to take photographs there. This is because these markets have been disrupted before. For example, tourists have in the past gone  and took pictures of these people without their permission, and the next thing is that they found out later that they are in a book that they did not know anything about at all. And so we spent a lot of time explaining to the people what it is that we wanted to accomplish with these images. So it was a collaborative effort with the people at these markets,” explained  Dube.

Ntuli, the other photographer on the panel said she also followed a similar approach of collaborating with the people whose pictures she took during this project.

Gog’MaNtuli explained that she did not choose to become a healer but it was a gift that was passed on from her late  father to her.

“In fact I did not want to become a healer. I actually hated being one. But I fell ill, and no Western medicine could find a fault with me. I ended up succumbing and became a healer and all was fine with me,” she said.

Morakinyo contribute material to it is running at the Windybrow Centre of the Arts, Nugget Street, Hillbrow, till May 31, 2021. There will also be walk abouts during May, which will be attended by some of the participating photographers during the duration of the exhibition.