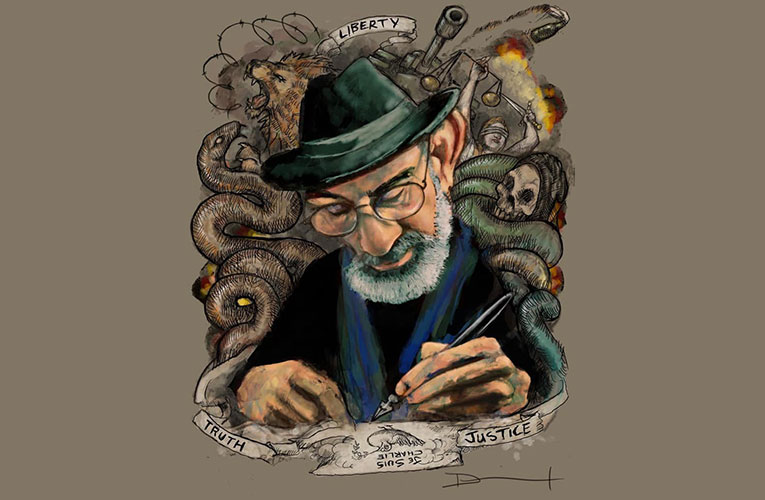 The winner of the 2021 Artfluence Human Rights Cartoon Competition  Daniel Sheldon has received an overwhelming praise from social media  for his winning entry titled Activist. The winning entry is a portrait of a beaded man, a reference to exiled Iranian political cartoonist  Kianoush Ramezani who is based in exile in France.

“We have a winner. Many congratulations to the winner of our cartoon competition: Daniel Sheldon with The Activist,” said Ismail Mahomed, Director of Centre for the Creative Arts, at the University of KwaZulu-Natal, organisers of Artfluence Festival, sponsored by the Kingdom of  the Netherlands.

“Being an artist itself is a soul wrenching commitment but political cartooning can  actually be likened to a war zone littered with death threats and intimidation. This illustration was inspired by a photo that Kianoush Ramezani an Iranian Political Cartoonist and activist living and working in exile in France, shared on his instagram feed, I thought of juxtaposing the calm serenity of the portrait with the wild and chaotic strife in his chosen art form. How the art is informed by conflict and an imbalance in society, how he, and other political cartoonists stay true to a cause for justice and truth and freedom in the face of extreme adversity and repression against an enemy with vast means.

Kianoush is in exile because of his cartoons, he says other artists where he lived find it difficult to find work, get mortgages and even end up being physically attacked for their work.,” commented Sheldon after being announced the winner of the Cartoon Competition league of this inaugural arts festival.

Another winner of a Human Rights Award for activism is soprano and activist Sibongile Mngoma who was awarded this award on Friday, 5, May, 2021, the first day of the festival. Mngoma was awarded for her role in leading about 40 artists to occupy the offices of the National Arts Council (NAC) in Newtown for two months, complaining about the manner in which the NAC handled the Presidential  Economic Stimulus Package (PESP) funds meant for artists to  activate economic activities in the sector hard hit by the Covid-19 pandemic.

The NAC battled for months to distribute R300 million to less than 2000 artists that applied  and qualified for receiving a grant. Till today, the government agency has not completed the disbursement of the funds to the artists, three weeks before the projects must be completed and applicants are obliged to send reports to the NEC on how they would have used the money on May 31, 2021.