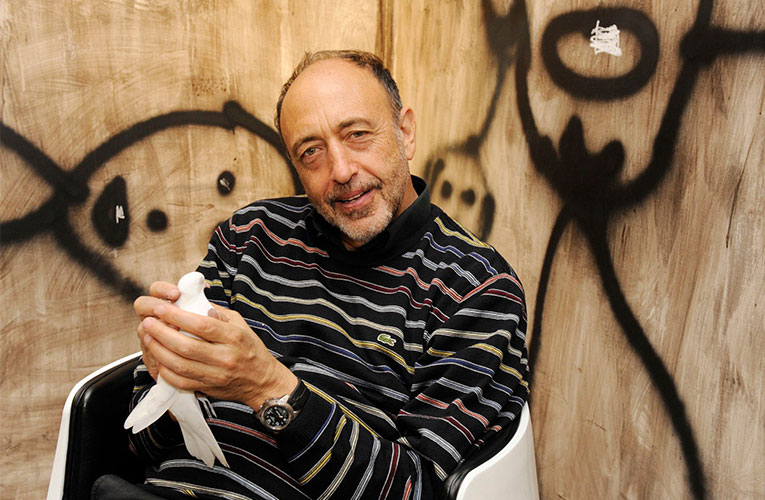 Roger the Rat is on at Daville Baillie Gallery, Victoria Yards, till February 2021

Legendary photographer Roger Ballen’s solid body of work for nearly four decades in South Africa has a distinct style, visual language and global impact to an extent that whenever he exhibits his body of work, gallery spaces become packed. Going to a Ballen opening exhibition is almost akin to going to a meet and great session with a rock star as his photographic influence has grown so big in South Africa and globally, that an opening resembles a mini festival of a different kind as arts enthusiasts, collectors and those interested in his brand of photography attend in big numbers.

No surprise there because his photography documents the aspect of life that is often on the periphery of popular mainstream imagination and beyond the reach of other photographers and artists, unless you have mastered the Ballensque language that he is universally known and respected for. That is what has made his works popular with both collectors and photography enthusiasts throughout the world.

His projects are always well thought out and well executed that they never fail to touch the souls, eyes and imagination of many.

This past Sunday, December 6, the eccentric photographer, had an opening of his latest body of work , Roger the Rat, at Daville Baillie Gallery, at Victoria Yards in Bertrams, East of Maboneng. And had I made it on Sunday, I would have been among a throng of people that would have packed this gallery, as they also moved randomly around this arts hub, shopping for unique projects, books, designer coffee and of course, art around this place. The fact that the opening of Roger the Rat, also coincided with the popular First Sunday of the Month, a series that seems to attract half the well heeled crowd from the northern suburbs of Johannesburg, who swarm the once undesirable and decaying part of the city for an alternative and arty lifestyle, meant a large crowd would have thronged the exhibition opening. That , I am quite sure about.

Well, I did not make it on Sunday, and only managed to visit Daville Baillie Gallery on Monday, December 7,  a relatively quiet day at Victoria Yards. Not a bad idea as one was able to become one with the work of Ballen as one immersed in it without having to punctuate the viewing experience with exchanging pleasantries with acquaintances,  as is often the case with gallery openings in Johannesburg these days. One is sure to bump on not one, but many people that move in your circles, and while that is good, especially for intimate contact that we were denied the pleasure of, for a good part of this year, due to Covid-19 related restrictions and lockdown. However, such candid interactions can sometimes be distracting when it comes to viewing art.

This point is quite crucial, especially when viewing a Ballen exhibition, which are at all times, thought provoking, evocative, and even challenging. Ballen pushes his visual representation of some aspects of society to the limit, and therefore for some they even find his work controversial. Roger the Rat is no different, as those who are conservative are sure to find this body of work quite challenging to consume without evoking a strong reaction, either imaginatively or emotionally. The artist in his work, is not known for having sensibilities for those who prefer the normal when it comes to portraying contemporary society and its issues. Ballen goes for the jugular, and that is his style.

Released in the Year of the Rat, this photographic series and book Roger the Rat is surreal, refined and disturbing. After all, Ballen has made a name for himself with his special eye for what is usually considered minor or outside, yet is nevertheless profound and touching. In his hands, the documentary power of the camera merges with the ingenious power of his imagination to peer into the soul and get under the viewer’s skin. Elaborately produced between 2015 and 2020, his new project is fresh and, amazingly, alive with pop art elements.

Delivered in impressive, sharp black-and-white shots, he follows the life of a creature whose body appears human, but who has the head of a rat. We witness absurd scenes that, deconstructed and wrested from everyday gestures, reveal the suppressed aspects of human existence.

This exhibition deals with a lot of themes that are contemporary, such as power and how power is exercised in everyday living. For example, one piece of art captures this human-like figure with a head of a rat, seated nicely, enjoying his cigarette. In fact this creature is chain smoking, judging by the number of cigarette stubs on the trail. There is a glass of wine on a coffee table. You will not immediately find this image unusual until you look above the human like creature’s  head, when suddenly your eye catches  portraits of two naked women. They seem to be waiting for him to finish his business of smoking and drinking, to start the real business whey they are there in the first place, and that is to have sex  with this creature. There is no doubt as to who is in charge in this room, and this scene in a away demonstrates the lack of power balance between a man and a woman when it comes to sex matters. The bastard is not even sharing the wine with these two poor women.

However, another piece seems to reverse this scene as here a viewer’s gaze is directed to a man, who is lying on his back, undressed to his waist, with his penis up. As you ponder about what does this mean, then you realize there is a naked woman, seemingly ready to have sex with this character.  But she seems to be in no hurry to jump to bed with him. Here its oblivious, it is the woman who is in charge when it comes to a seemingly pending sexual activity between the two.

And yet, there is another controversial art piece that shows a cheetah on top of a half dressed woman, who is seemingly in a corresponding sexual position with the cheetah, and the human and rat-like Roger the Rat, is ready to capture the action with his camera. This is as the woman seems to be scared about what is about to happen. In fact it looks like a rape scene, and this guy does not bother to assist the trapped woman. Instead he is interesting in capturing the moment on camera.

It is clear in this exhibition that Ballen is using the character of this half-human and half creature, Roger the Rat, to dissect society today, with its current complex social issues of everyday, including the issue of patriarchy and its dominant position in human relations. He is also commenting on selfishness that seems to be part of modern society. In other words, this is a typical Ballen exhibition , unapologetically bold and challenging intellectually.

Born in New York City and living in South Africa since 1982, Ballen is respected for developing his own style of documenting life through photography, installation and painting.